Douchbag of the Day

Today we have three candidates:

Bonus: photo of the woman John Ensign was banging: 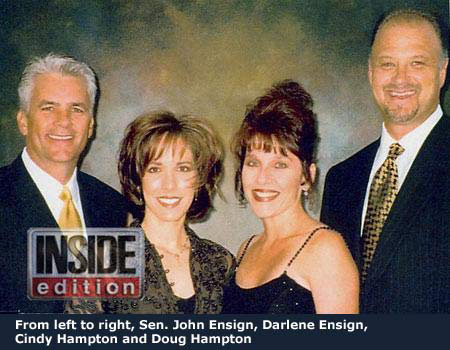 Short video on the Chevy Volt here – I like this car.

Doug looks like he could kick Ensign’s ass with one hand tied behind his back. I hope he does.

And as for Michelle Bachmann… give me a break! Who doubts that she would have ordered the Japanese internment if she’d been running things in 1943?

@Serolf Divad:
Of course. She would have been a tad bit less discriminating though and probably tossed everyone with black hair, yellowish skin and slanted eyes along with the Japanese up to and including those with liver disease.

Has anybody seen Michele Bachmann and Sacha Baron Cohen in the same room?

Those eyes on Bachmann … reminds me of this.

Is it just me, or does Ensign’s GF look just like his wife, but with a different do?

OK, blogenfredue: let me explain how I just spent the last 20 minutes of my life

1) Clicked your link of “runaway bride” Jennifer Wilbanks
2) Immediately thought of the song “Bette Davis eyes” by singer-songwriter Kim Carnes
3) Went to youtube and watched about2 minutes of “You’ve got Bette Davis Eyes”
4) Had one of those “I wonder what ever happened to…” moments and went over to Wikipedia to check out Kim Carnes
5) Read about how Bette Davis thanked Carnes for singing that sone about her since it “made me relevant with my grandson.”
6) Went to google images to see some pics of Bette Davis
7) Noticed how those eyes made her seem at times scary and at times quite beautiful
8) Came back here.

Just in case you were curious.

Rep. Bachmann is worried about ACORN? I’m sure the fact that Lockheed-Martin is processing almost all of the census forms gives her warm fuzzy feelings in the middle of the night. Even the forms we’re processing internally are on slightly tested L-M equipment.

The census will be the trial run of all of L-M’s shiny new systems. We sort of skipped the dress rehearsal. What could conceivably go wrong?

@Mistress Cynica: I thought the same thing. Sort of like Vitter’s wife and one of his hookers.
@Serolf Divad: And this is somehow my fault?

Not to speak ill of the ill, but imagine being the paramedic who drew the short straw and had to give him CPR.

I think I’m going to be sick, now. Is it the year 2009 or 1209? ’cause I think I took a wrong turn somewhere around exit 114A. I wonder if these people treat the flu through bloodletting? I hope someone lets this poor kid in on a little secret: he’s the only well person in a room full of sick fucks.

He’ll be OK. The heavens have ordained that Michael Jackson cannot die on the same day as Farrah Fawcett.

Oh, and one more thing before I run off to Comcast to turn in my Cable boxes: I never thought I’d see the day when one of the Fox News Blonde Spokesmodels sounds more sane, rational and collected than the guest she’s interviewing.

@Serolf Divad: I have wrecked your day with just one post.

@blogenfreude: Akin to Divad, I just spent ten minutes on Wikipedia reading about Piazzolla and bandoneons thanks to Chainsaw.

I can’t even bring myself to watch it. That kid is going to wind up so twisted in that environment- I’ve seen internalized homophobia do terrible, terrible things to people. Again, so sad.

@SanFranLefty: Things just keep getting worse for Sanford – not only did he originally plan a ten day absence, he was observed:

We’ve been on the hunt in Buenos Aires, Argentina and found the bar where Governor Mark Sanford brought his mistress — so how do you say PDA in Spanish?

Soto says they were “all over each other” last week in his bar, “kissing, holding hands and drinking wine.”

Soto was impressed with Maria, saying she has “un cuerpazo'” — translation: a banging body.

Do they pick women that look like their wives on purpose, or do they just think of women as being interchangeable and act that out unconsciously?

I really can’t gloat too much. FSM knows I’ve done some s-t-u-p-i-d stuff for hawt guys over the years. What would you call that, ass madness?

To paraphrase Lewis Black, if you’ve never driven 18 miles out of your way following some guy with a sweet ass, then you’ve no idea what it’s like to be a gay man.

@blogenfreude: I think I forgot to mention this last night, but what are the odds he planned to break up before he was caught at the airport?

What is your guilty pleasure?

It depends on the week. My latest is that I bought a new tractor for the farm and given these economic times, doing so is somewhat indulgent. So in that regard I feel a touch of guilt – but even more pleasure in the new John Deere green!

What do you worry about?

The good news is that I don’t sweat the small things. The bad news is that I’m worried about the future of our country in the form of capitalism that will drive our nation going forward.

Oddly enough, it’s running heavy equipment. Our family’s farm afforded me the chance to develop these skills growing up and I find a certain level of satisfaction in moving dirt whenever I indeed get the chance.

@nojo: Jesus H, he certainly loves his tractor and excavator. Sounds like a 4 year old boy.

@SanFranLefty: I am waiting for The State to locate the email in which he confesses he’s pulled a melon out of the ground at dawn, cutt a hole in it and pestorked it while watching the sun rise and thinking of her

@rptrcub: I’m in for rhythm guitar.

@FlyingChainSaw: Didn’t Tito Puente have one in his band?

@Dodgerblue: Rototiller. Not the same but better for an all acoustic ensemble.