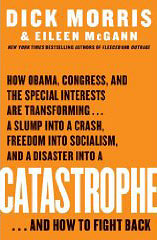 Blurb: “It’s time to take back our country. Now. It’s that simple. It’s that urgent. So begins Dick Morris and Eileen McGann’s latest and most important book. They say that we must act before President Barack Obama fully implements his radical political agenda. Because after Obama has won his war on prosperity and canceled the war on terror, it will be too late to regain our liberty or our security.”

Review: None yet, so let’s enjoy more of the blurb: “In Fleeced, [Morris and McGann] went after the credit card companies, the subprime mortgage lenders, and the hedge fund billionaires who conspired to wreck the economy — and Barack Obama, whose policies, they predicted last summer, would ‘trigger a stock market crash.'”

Customers Also Bought: “Surrender Is Not an Option: Defending America at the United Nations,” by John Bolton

Footnote: Fleeced was published June 24, 2008. Contrary to the lies you’re told by liberal media, the stock market hasn’t crashed yet.

Ah Dick Morris. Who in 2007 was making a living going around talking about how Hillz would be the most dangerous socialist candidate to destroy US America. You would think it would have been difficult to switch gears so quickly, but it was not. Say what you will, but they can certainly stick to a meme.

I feel the sudden urge to suck someone’s toes.

Triggering a stock market crash before he was even elected? Damn, he’s good.

Whenever Dick Morris is mentioned, I think of words beginning with “sl,” such as “slime,” “sleaze,” and “slither.” During the concerted campaigns against the Clintons in the first term of his presidency, I was wholeheartedly on their side, until they enlisted help from Dick Morris, at which point I began to wonder about their judgment. I cannot think of any way Morris is not thoroughly disgusting.

@lynnlightfoot: The man isn’t fit to lick up the slime trails left by garden slugs. And I hate slugs, my sworn garden enemy.