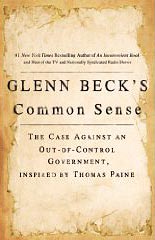 Blurb: “Glenn Beck revisits Paine’s powerful treatise with one purpose: to galvanize Americans to see past government’s easy solutions, two-part monopoly, and illogical methods and take back our great country.”

Review: “Thomas Paine was a rabble-rousing hellion who punched out many more revolutionary pamphlets than those collected in ‘Common Sense.’ Further, Thomas Paine didn’t survive the George Washington government following the American Revolution and took off for France to fight in the French Revolution in 1792. Paine was a out-and-out lefty and where Glen Beck gets off acquiring Paine to boost his sales is typical of the former CNN commentator, the rat. Reader, beware.”

Footnote: You didn’t know Glenn sports the magic undies? Neither did we!

Yes, indeed, we do need to “galvanize Americans to see past government’s easy solutions” and bring them to the light. If adopted, the suggestions in the manifesto of Alaska Teabagger Party would complicate everything very nicely. While we’re at it, I suggest that we re-invent the wheel. The one we have now is too easy a solution.

1. No legislator shall be in office for more than two (2) years term limits.

2. All legislators must pay into the Social Security yearly from their wages.

3. No legislator shall be able to give themselves raises, the American people will vote for these raises on the legislator’s record.

5. Any government official whether the President or the Janitor does not comply, honor, pledge the Constitution of the United States will be thrown out of office and newly elected will replace them.

6. Any legislator that breaks the law, ex: (tax evasion, lobbying, conflict of interest) will not be rewarded with monies or committees.

7. The American people would have the right to throw any legislator out of office if anyone of them does not read legislation before voting on them.

8. No government official shall start a war if they do not intend to win a war.

9. We need to abolish the Electoral College and the American people would determine who will be the President.

10. All candidates for government service must go through a mandatory universal service either in the Armed Service or through Community involvement before being vetted for candidacy.

11. English would be our main language in the United States.

12. No more amnesty programs for illegal immigrants. All will abide by United States immigration laws or will be arrested and deported back to their countries.

13. Any immigrants in this country or coming to this country will abide by the laws of the United States of America.

14. The words “In God We Trust” would never be abolished from our monies, schools, government installations.

15. The Pledge of Allegiance to the Flag will be restored back in our schools.

16. Our constitution would never be amended; the founding structure would be forever the same.

17. The fair Tax would be instrumented to everyone.

18. Our military personnel active or veteran status would be afforded complete health care with no stipulations.

19. Christianity will again be restored as our main religious entity.

20.Big government will not be allowed, no handouts and accountability and transparency will be the law of the land

Yeah, that will definitely work.

What about those arctic states who basically mooch off the rest of the states and feel entitled to steal gov’t monies like there is no tomorrow?

“You didn’t know Glenn sports the magic undies? Neither did we!”

Yeah, I did. He’s married to one of Hughy Nibley’s daughters, I believe. http://en.wikipedia.org/wiki/Hugh_Nibley

Some Mos are Birchers (Ezra Taft Benson), and they’ve been working their way into non-elected positions since Reed Smoot paved the way. http://en.wikipedia.org/wiki/Reed_Smoot

Never mind that their original temple ceremonies called for an overthrow of the federal govt. http://www.mormonzeitgeist.com/

Not to go all tin foil hat on y’all, but there are a shitton of Mos in the CIA…

“You didn’t know Glenn sports the magic undies? Neither did we!”

I just read something about that the other day and was surprised. Most Mormons I’ve known are relentlessly chipper people. (I hate that.)
He fights that stereotype well.