Stinque
Home Latest Comments Log in
If it smells, we’re on it.
Stinque
Cassandra was right.
Tehran Spring 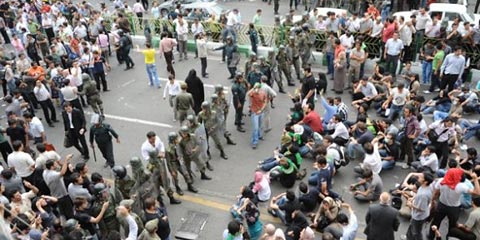 Since the occasional cutaway to Christiane Amanpour isn’t doing it for us, here’s a list of online resources providing continuing coverage and analysis of what certainly feels like a world-historical event, even if it’s happening on a sleepy cable-news weekend.

Andrew Sullivan
If we had all day to blog, that’s what we’d be doing.

niacINsight
National Iranian American Council. No clue where they stand on things the rest of the time, but Saturday they were acting like a newswire you can’t ignore.

TPM
Josh Marshall was late getting started — for some strange reason he prefers spending the day off with his family — but now that he’s on it, he’s keeping close track.

The Lede
The Times? Really? Yup.

And bear in mind that with breaking news, facts are fungible: rumors may be reported without sufficient attribution, stories about street violence in one part of town may overlook calm elsewhere, and hey, the government may have actually won a two-thirds landslide. Although they’re not exactly acting like it.

Fuck, why aren’t we sending these kids stockpiles of stinger missiles? Go, kids, go! Behead you some theocratic fundy tyrants!

Could we set up a stinger-missile fund for wayward Socialist Youth here at home? Or at least a few pennies to buy some red hankies?

Srsly Nojo, thanks for linking to credible sources today. I imagine the MSM feeds tomorrow will be all about how the Evil One has triumphed again and thus, we need to send bombs that way.

Facts are fungible? Bastard. I always have to look up that word. And I never remember what it means. I always think it has something to do with exterminators. Or yeast.

Now I go look at linky-clickeys.

It’s a hell of lot easier just let them sort it out themselves. I hope the “bomb bomb Iran” types would shut the fuck up, but I doubt it. If those fuckers got their way then none of this would have happened.

I always have to look up that word. And I never remember what it means.

Reminiscent of a great Jay Z couplet: I got no patience; and I hate waitin’.

Here I’m using it to allude to the notion that you can’t take all reports at their word: there’s Western wishful thinking, there’s the potential of being Chalabied by exiled dissidents, there’s the problem of spotty reporting that may not reflect the whole, and in general it’s very hard to determine the significance of a given fact, even if true. Especially right now, where there’s some suspicion that the military has trumped the theocracy, both of which trump what passes for a civil government.

These are the things you’d like a well-grounded anchor of a well-produced newscast to sort out while the news breaks. Too bad we don’t have one.

@nojo: I miss Uncle Walter. Can you imagine any member of the media being the “most trusted man in America” these days? It’s laughable.

@Mistress Cynica: We didn’t have a local CBS station in those days, so all my comparisons are to the bookish John Chancellor, of all people.

But CNN used to be competent at following a breaking story, and Peter Jennings was pretty good as sorting through the incoming facts. Moments like those are when an anchor really is a “managing editor,” deciding where to focus and what to ignore. It’s like watching a newsroom in action.