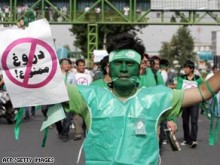 Yes, the president of Iran’s own election monitoring commission has declared the result invalid and called for a do-over. That is huge news: when a regime’s own electoral monitors beak ranks, what chance does the regime have of persuading anyone in the world or Iran that it has democratic legitimacy?

Nothing is wrong, just ask Mahmoud!

Reminds me of this guy:

I see house arrest in this gent’s future.

@Dodgerblue:
More like: You don’t want to make them angry. You wouldn’t like it when they make him angry.

Gee, more adherence to the idea of letting every person’s vote count is found in Iran than was found in 2000 in the U.S. Supreme Court.

@SanFranLefty:
Judging by the reactions and the last few close votes around US America, it wouldn’t have gone well for W and gang. Most of the rejected votes have been Dem.

My tin foil hat theory was that the Repubs knew that and used their buddies Rhenquist, Thomas and Scalia to stop it and take over.

Does this make Mahmoud 1 degree of separation from Kevin Bacon?

@Jamie Sommers: I had not thought of that.

Ok, first, thanks so so much for non-youtube content, which is blocked for me.

Second, what is up with that translation on the first (CNN) vid? That guy speaks so strangely and hesitantly, its like I am watching old SNL.

what chance does the regime have of persuading anyone in the world or Iran that it has democratic legitimacy?

Absolutely none, and the local consequences of that will play out for years, if nothing decisive happens in the next few days. Whoever holds the power has just blown off a generation.

But there’s the looming question behind all the breaking news: Who holds the power? The Iranian presidency itself is a limited position — Ahmadinejad can screw up the economy, but he doesn’t have his finger on the Button. And it’s looking like the theocracy and the military may not have been presenting a united front in the weekend’s events.

The whole electoral system was designed to allow some breathing space to popular will without affecting the real power. (Wait — did I switch countries here…?) If the rulers, whoever they may prove to be, no longer care to maintain the pretense, that’s the real emerging story. And while guns certainly count for something, they ultimately weren’t effective thirty years ago.

According to HuffPo, they’re calling the “fraud” a hardline coup.

Joe Lie can’t shut his fucking mouth. I applaud that Obama has kept his mouth shut about the Iranian election. It’s better to let them figure it out (they aren’t retarded and 4000+ years of civilization has to count for somehting.)

I know that when the outsiders aka US interests (maybe not the gov’t) have “intervened” in ours, I don’t really like it.

@ManchuCandidate: The moment I heard that Plugz was on Meet the Patsy this morning, I cringed. I’ve only heard a clip of what he said, and that much seemed roughly within discretion, but I dread what else he may have spilled.

It seems generally agreed that the U.S. should keep its official mouth shut, or at least be excruciatingly circumspect. The moment we shout “Go Green!”, the Great Satan will be all over Iranian TV.

CNN: We’re going to spend the full hour on Iran, but first, the umpteenth replay of my exclusive interview with released Gitmo detainees. Plus some tweets from viewers. Who sez we’re not on the story?

have they killed everyone full of hope yet? Scared to check.

And this is the country that Bush, or more likely his Aipac neocon insane asshole Cheney cabal puppetmasters, decided to treat as an implacable enemy and rattle their swords at for 8 years.

So just fucking stupid, this is the proof of their idiocy. 9 years ago it was known that there was a strong reform movement in Iran, but no, we demonized and threatened them for 8 years.

And goddamit, its just a plain fact of life that repressive regimes need threats to survive, its their justification for all their excesses, “we are in danger, they are against us, anyone opposing us is playing to the enemies hand,” Bush and Cheney are the reason this didn’t happen sooner, they are the reason the Iranian hardliners have enough power still to try to repress this uprising.

@SanFranLefty: Well, let’s just tune in CNN for the latest — tweets from viewers.

Otherwise I’d have to double-check, but I recall a number of 100 dead Saturday — although that’s unconfirmed, as is pretty much everything. Except the violence. The government’s cracking down hard, perhaps even bringing in Arab thugs when the local Persian police resist orders.

Known opposition leaders are also being rounded up by the dozens. And commuications have been progressively throttled since Friday.

@Promnight: Always the neocons. And they’ve been licking their chops all weekend.

@nojo: In the end, just what is the psychosis of the neocons, what is their motivating idea?

Supposedly, they descend from the hawkish democrats of the 60s and 70s, but then there is the global domination theme, and the outright fascist strain of “the people don’t know whats good for them, its appropriate to lie to them about our real motivations and to create fervor for the wars we need to fight to achieve global domination,” thats the Straussian fucking evil strain, but even that does not explain things like Iraq and Iran, its more like the Israeli lobby ( thatsa kind way to describe it) and the oil industry hijacked fascist straussian ideology for their own purposes, and directed what was otherwise an ugly and extreme form of realpolitick towards narrow and nearsighted and unrealistic goals, they thought “Hey, we send in some marines, take afghanistan, control the central asian oil, and then conquer Iran and just own their oil, and then conquer Iran for the greater glory of Israel.”

Its almost like we had a peabrain moron for president, controlled by a psychotic narcissist VP, both of whom were puppets of two different interest groups, the oil industry and the Israeli lobby, and in their stupidity and ignorance, they thought we could just do what we want, anywhere we want in the world, with our shiny bright weapons and military, no matter how pie in the sky the scheme (like “the Iraq war will be over, and the troops home, by December, and it will only cost $70 billion.)

The ultimate moment in it all, was Richard Pearle imagining that far in the future, his offspring would compose fucking heroic, Homeric, Old Testament type songs to the honor of the bold and heroic actions he played a part in putting into effect. When in fact, history will regard him, and his ilk, and his plans, dreams, worldview, and actions, as amongst the stupidest and most evil actions ever undertaken by a supposedly righteous democracy supposedly motivated by justice and human freedom.

Its even worse that you think. John Freaking Bolton just penned an op-ed for WSJ (natch), with this kicker:

Many argue that Israeli military action will cause Iranians to rally in support of the mullahs’ regime and plunge the region into political chaos. To the contrary, a strike accompanied by effective public diplomacy could well turn Iran’s diverse population against an oppressive regime.

These idiots are still making the same, dumb arguments, after all the failure they have enjoyed.

Wow. Talk about a clock being right twice a day.

@RZ: Whenever I see an argument like that, I make a standard substitution:

To the contrary, a strike on New York City accompanied by effective public diplomacy…

@Promnight: Supposedly, they descend from the hawkish democrats of the 60s and 70s

That’s my book understanding, and I was there as they started picking off the brighter college kids.

What they promised was a compelling intellectual argument, but I didn’t see it then, and I definitely don’t see it now. All I’ve seen from 1980 on is a flight from reality and cynical intellectual dishonesty.

@SanFranLefty: According to Sully, who was still blogging at 11 PM EDT and reporting on Twitters from students inside Iran, there have been brutal attacks on dorms at the university in Tehran. One post said that a 17 yr old had been killed in the streets, an the police are blocking access to hospitals.

Speaking of flights from reality…

Richard Perle, a neoconservative and former Pentagon adviser, said Obama must share the blame for Ahmadinejad’s power grab. “Normally, when you unclench your fist it benefits the hardliners, because Obama appeared to be saying we can do business with you even with your present policies.”

Yes, it’s all about Cairo. Or us, really. I caught whiffs of this as I was throwing shoes at CNN, how the story ended Friday night, and now it’s just a question how long before we give Israel a knowing wink.

There’s a fucking revolution happening over there — the generals are far more afraid of their own people than us. Are we that blind?

Or need I ask?

@nojo: Or need I ask? I think you know the answer to that question.