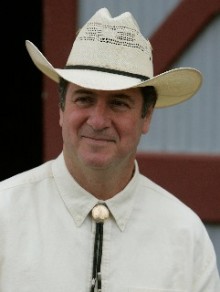 Let me guess, he knows more about energy than anyone in the country (except Sarah Palin).

Allen’s new organization is a partner group to the Institute for Energy Research, which is partially funded by Exxon Mobil and run by Robert Bradley Jr., who worked at Enron. In 2003, Bradley wrote the book “Climate Alarmism Reconsidered,” which argued that “that climate alarmism and its corollary, policy activism, are unwarranted and counterproductive” in the face of global climate change.

Go here and read about what he did to his siblings.  Then tell me whether you think he has anything useful to say.

Once a whore. Always a whore.

I knew that name rang a bell.

PS. He would seem to be evidence of the corrosive power of Sport.

From the official WH press release.
Hey, it’s something. I’m looking for anything cheering today.

@Mistress Cynica: “…except where mandated by law, which I’m in no hurry to overturn.”

Sorry. You know how Republicans were able to play to their base for years without actually doing anything? Certainly the words from the White House are much sweeter than we’re used to, but I’d be happier with some effort.

@Mistress Cynica: Thank you for trying. I haz teh sad. My neighbor’s kitten who I am the surrogate aunt to is very sick and is going to have to go to the litter box in the sky in the next 48 hours or so, and someone very close to me is deploying overseas tomorrow to go fight brown Arab people.

Is everybody feeling wistful tonight? I sure am.

@Also sprach Tommmcatt: Not sure about wistful, but I’ll cop to exhausted, and watching Rachel sure didn’t help.

Next up on the Disappointment Calendar, the Mideast. Although despite kowtowing to AIPAC last summer, it appears — appears — that Barry’s being a hardass on Israel about the illegal settlements. I’m open to pleasant surprises.

@Also sprach Tommmcatt: I should also mention a small pleasure: having the East Coast feed of Comedy Central means I don’t have to feel guilty about checking in on Conan.

But it’s all about freedom, see!? It’s even got the word “Freedom” right there in its name.

@nojo: So, what’s the early word on Conan? I honestly never liked the guy’s late night shtick too much, and my default switch in that time slot would be Letterman if I didn’t have cable, but I’m curious.

That ad thing on the left blows my mind. While I was on the Hummer post, it had an ebay motors add with H2 parts for sale. I come here and now I get Progressive auto insurance.

@Jamie Sommers: On the Iraq war post previous to this, I just had an ad for a tank top of a cut-out of a woman bent at the waist with it saying “Jesse’s Girl” or whatever and the advertisement was “Make His Dog-Tags Jingle”

OT, I’m gonna figure out the Scrabble thing on facebook today. Then, I am coming for you, so get your dictionary out…

@Also sprach Tommmcatt: I’m in if there is a Scrabble or Word Twist challenge.

@Also sprach Tommmcatt: I just sent you the instructions on how to find my invitation to play. I won my last game by more than 500 points so you better get ready.

@Dodgerblue: Oh, you want to play Scrabble too? More than happy to oblige.

@SanFranLefty:
@Dodgerblue:
@Also sprach Tommmcatt:
you read that right: she won her last game by 500 points!
no it wasn’t me, but i’ve had the pleasure of playing scrabble with our den mother, and i was out of breath keeping up. if you aren’t an average 400 point player, spare yourselves. she’s vicious!
and i’m waiting for another crack at her too!
let’s go lefty…knock us down like pins, we’re bringing it!

and look at that coy response to dodger…..
*gasp* our den mother is a scrabble hustler!!!!!!

@baked: I’m chewing some qat to get ready.

@SanFranLefty: can i get in on that too? i finally got dragged into making my own profile which i will probably ignore for weeks at a time but hey, what’s new.

Oh and happy news! I got my brand new teevee yesterday. Turns out Keith O is not actually an oompa loompa, there are legible scores at the top of the screen during baseball games, and Hugh Laurie is hawter than I ever imagined.

We’ll see how it goes. You have to lose to learn, after all…

you are wise and adorable tommycatt, and anyway it’s still fun to play.

@Jamie Sommers: Absolutely. You need to email Nojo to get in to the sandbox and from there I can challenge you to a Scrabble Wordscraper* game.

*Apologies to any copyright attorneys.

@Dodgerblue: I used qat in a recent game.

@Nabisco: Well, let’s preface this by saying that at 13 or so, I bought and consumed a paperback on Tonight Show history.

(Did you know that while Steve Allen was the first host of the program by that name, NBC had earlier attempted America After Dark? It’s true!)

And let’s also present the Nojo Rule of Late Night: Carson peaked in the 70s, Letterman in the 80s, Conan in the 90s. This decade is owned by Stewart & Colbert.

Letterman, by the way, nailed (and later abandoned) the Non-Carson Monologue Formula: Three jokes and out. Unless you’re Johnny, you just can’t sustain a long string of stand-up gags every night. Best to get to the desk pronto and run some shtick.

So, Conan: Monday was fun — with a very well-executed cold open — but Tuesday quickly became the familiar small show on an unfamiliar large stage. Conan would very much benefit from the three-gag monologue rule, since his standup jokes have a very annoying pattern of “Did you hear? Yeah. Punchline.” It’s comic laziness, and I’ve never liked it.

But the real frustrating thing is that while Andy Richter understandably lunged for a steady paycheck, he’s been banished to an announcer’s podium. When Conan goes to the desk for shtick, Andy stays away from the couch. I find this a criminal waste of resources, because unlike Ed McMahon, Andy Richter is actually funny.

And, frankly, is the only reason I’m interested in Conan at all — if they’re going to keep Andy Richter off-camera, my interest quickly wanes.

The late-night desk & sofa format itself, meanwhile, is incredibly inefficient as a comedy-delivery vehicle these days. I’m really spoiled on the high-octane presentation of the Daily Show and Colbert Report.

And that Tonight Show paperback? I’m sure it’s still in a box somewhere. I take that shit seriously.

@nojo: And it should go without saying that Jay Leno is Beneath Notice.

@nojo: I never watch that crap except when I travel and check out TV while I grind email. The sofa and desk shows would do well by letting the alleged comic tell his three jokes and then let the band play for an hour. Jesus, Carson was worth watching for the chance to hear the orchestra at the end of the commercial breaks or, be still my heart, to hear Severinsen solo in front of that band. Letterman’s band is similarly amazing. I saw the bass player from the Letterman show a couple of months back at Birdland playing with a pick-up orchestra that does big band in the style of Woody Herman and Buddy Rich. Reminded me what serious gods are playing in those late-night show orchestras. Sight read and solo’ed through some incredibly hairy charts and still drove the beat with the drummer in ways that you would think would require a license from DHS.

We’re all reading the same horn charts here. I agree with the peaks, Nojo, although the 90s were pretty much lost to me due to overseas drifting and spotty television coverage. I was still taping Letterman every night until I stumbled on Stewart and Colbert through the web; Dave showed he could still bring it during the elections. Conan and Richter? Meh, but I always wondered if it was just me.

The bands do certainly make those shows, as do the musical appearances. I’d sit mesmerized by Buddy Rich’s appearances on Carson, no it didn’t make me a jazz hound but damn I liked the percussion. Letterman had the brilliance to make Paul Shaffer his twofer for Doc and Ed.

Leno? He was a great guest on Letterman’s original NBC show…”Jay Walking” is the absolute worst attempt at regurgitating a Steve Allen gig, whereas Dave totally nailed the “put me in a suit of Alka Seltzer and dunk me in a tank of water”.

I’ll have to look for that paperback.

Yup, the band cooked. And Tommy Newsom was a great straight man.

@Nabisco: I neglected to mention another Tonight precursor called Broadway Open House. That’s the show that gave Dagmar to the world. I briefly drove a 55 Buick with Dagmars.

@nojo: I think Joe Pass used to sit in with the Tonight Show and the Merv Griffin show bands.

@nojo: Yes, that gal had some headlights.