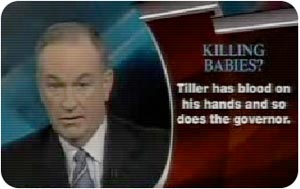 The Operation Rescue website is down, but from the Google cache we find this press release from June 13, 2007, touting OR’s involvement in an O’Reilly segment attacking George Tiller, including an ambush interview:

The segment appeared on The O’Reilly Factor news program on Tuesday, June 12, 2007, and discussed the recently released video-taped statement by nationally noted psychiatrist Dr. Paul McHugh, who was contracted by former Attorney General Phill Kline to examine redacted medical records obtained through subpoena from Tiller’s abortion mill and render an expert opinion about the validity of the psychiatric diagnoses used by Tiller to justify post-viability abortions.

Although Operation Rescue claims credit for the gotcha, it is not mentioned by name in the Fox transcript:

PORTER BARRY, “FACTOR” PRODUCER: Why are you one of the only doctors who does these kind of abortions?

BARRY: They call you Tiller, the baby Killer. Is that appropriate? .

TILLER: I’m think I’m going to get in my car and go to work.

TILLER: Hi, is this 911? This is Dr. George Tiller. I am at Edgemoore and Harry at QuickTrip. I’m being accosted by the people from O’Reilly. Yes, and they are preventing me from getting in my car and leaving.

BARRY: You can get in your car and go, Dr. Tiller.

The YouTube clip included with the Operation Rescue press release, showing the ambush interview, was later removed for a “terms of use violation.”

Sociopaths make up the bulk of Fox’s viewing audience (cf. Cheney). Deep down, Bill-O considers this a win.

This kind of bullshit is only going to get worse as we go through the Unicorn Administration.

Gawker is calling out O’Reilly’s producer on this. The one they’re currently stalking.