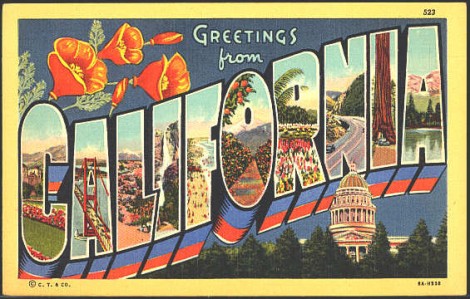 In a special election on May 19, voters rejected a batch of measures on increasing taxes, borrowing funds and reapportioning state money that were designed to close a multibillion-dollar budget gap. The cuts Mr. Schwarzenegger has proposed to make up the difference, if enacted by the Legislature, would turn California into a place that in some ways would be unrecognizable in modern America: poor children would have no health insurance, prisoners would be released by the thousands and state parks would be closed.

Sounds like GOP nirvana – except for the part about freeing prisoners.

They’re not actually freeing that many prisoners – just the stoners. They’re going to dump about 20,000 undocumented prisoners on the fed’s doorstep.

Some asshat GOP Assemblymember was confronted this week by a parade of persons with disabilities testifying to the budget committee against the budget cuts to various programs that provide them with medicine, in home supportive services, health insurance for children, basic welfare for parents of kids with disabilities, pointing out that people will DIE due to these cuts. He told the Sacramento Bee something along the lines of “these people just need to get off their asses and move to another state.”

California will become the only state/province/region in any First World country that does not provide basic subsistence assistance to children.

Can Mexico invade to save Khaliphonya from itself?

Or can you guys vote to kick out the interior and Orange County so you can repeal Prop 13 (the actual source of your problems)?

It’s easy. Children, the poor and disabled will all move to the closed state parks and forage for food. Only the best-adapted will survive. It’s taking the Katrina theory a step further.

@SanFranLefty:
“Arnie can suck my dick for thinking a No vote means no more taxes.”

I had to do a double take on that statement. Wow. Your surgeons are amazing. You could have fooled me. Heh.

@Dodgerblue: Or they can move in to San Quentin while it’s on the real estate market.

@ManchuCandidate: There’s a move on to have a constitutional convention that would among other things overturn Prop. 13 and (hopefully) make it much harder to have propositions in the future. The Assessor for the City and County of EssEff has asked my assemblymember to get a proposition on the ballot that would basically repeal the Prop. 13 property tax protections for corporations and bizness.

ADD to Manchu: Speaking of my metaphorical dick.

BREAKING HARD: Abortion doc George Tiller shot and killed outside his church in Wichita, Kansas.
He was the subject of a witch hunt by the Kansas AG who tried to get the names of all the women who had been to his clinic.

@SanFranLefty:
Damn well should be done.

@SanFranLefty: Not to belittle the problems in your state, but Bob the Builder is at the Beacon Theater today. My neighborhood is overrun with Park Slope mommies and daddies and their hellspawn. I think cocktail hour starts early today.

@blogenfreude: It’s after noon on the East Coast, what are you waiting for?

@SanFranLefty: Usually I kick off the Sunday cocktail hour at 3 (unless there’s a football game), but the sight of a holier-than-thou mommy yelling at the clerk in my bodega for not having a particular fruit wrap thingy is pushing me towards now. Also, some daddy whacked me with the stroller in Fairway. I love kids, but shit – have you seen these strollers? They look like lunar rovers. Huge tires, two seats, storage like a Honda Civic.

@SanFranLefty: I had a client in San Quentin who I used to visit. It’s actually quite a nice location.

Guh, am I glad I got out of the state while the getting was good. Nothing gets fixed until Prop 13 is out and a budget and taxes can be passed with a majority.

@blogenfreude: Mr. SFL and I just got home from the California Academy of Sciences and Aquarium. We were the only ones there w/out a stroller, I shit thee not.

Got a pic of the two-headed snake.

speaking of strollers, here the super jews breed like crazy. i haven’t even seen a stroller that seats one. you aren’t a good israeli if you don’t have at least four. four is the minimum. it’s not uncommon to have 6 or 7.
grow them soldiers! very different from american jews who have 1.4 children, considered a crisis in rabbinical circles.

met a hot guy and newest bff in the dr.’s office yesterday. chit chatting in the waiting room, he asks me if i smoke pot. taken aback, i asked him what would give him that impression, as i was sober and dressed well. he said, i could just tell. weedar. clearing up why i am targeted at every single airport.
he told me hilarious stories of how the home grown fields are looked after by the very religious who daven over the plants!!! bobby zimmerman was right–everybody must get stoned! he’s coming over today with samples. report forthcoming on whether i need to start praying more about everything else.
@SanFranLefty:
sister lefty…HA! my fave thing to say to assholes: suck my dick, and blow me. must be our inner gay man talking.

When Son of RML was still in his man-portable stage, I used to put in him the baby backpack and go for a walk on the treadmill. I could knock him out in 12 mins. on average. Now I’d need at least a handtruck to move him anywhere. He enters 7th grade in the fall and is about 2-3 ins and 5-10 lbs bigger than me. The football coach at his new school was drooling over him, but I think he’ll be the biggest damn theater tech/set painter/prop builder they ever had.