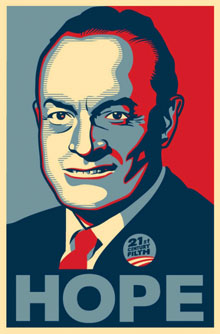 Finally, some fresh air on the torture issue:

“I think it’s important to also know that this is the law, this isn’t a policy.”

Michael Mullen, chairman of the Joint Chiefs of Staff, laying out clearly the Obama Administration’s plans to prosecute the architects of the Bush torture program, which violates international treaties and federal—

Hold on. He’s actually shooting down the Obama Administration’s plans to continue indefinite detentions without appeal to habeas—

@SanFranLefty: Yes, in a shocking development, neither SFL nor JNOV were selected for the Supremes.

Prediction: Sotomayor will be confirmed easily.

@Dodgerblue: George Bush the Elder originally nominated her for SDNY, and I seriously doubt that the few remaining moderate GOP senators (esp the ones with lady-parts) want to go down in history as trying to filibuster the first Latina justice.

But I’m sure that won’t stop the mental cretins from Oklahoma and South Carolina.

ADD: When Unicorn called me last night to give me the news, he said I was a little too young.

@SanFranLefty: And if the CA Supreme Court strikes down Prop 8 we might see the Wingularity. fun!

blogenfreude: No way that the California Supremes take down Prop 8. Million to one shot. If I remember right, the panel was giving off an “I love you, but this isn’t working” vibe. And, perhaps, it’s for the best.

Seriously: taking down Prop 8 is the first rest stop on the freeway to ruin. If this happens, the Mormons are going to be so involved that the elders are going to have to start paying taxes. NOM NOM NOM (w/ or w/o Miss California and her fake bewbies) are going to build up a warchest and unleash hell. If there’s a takedown today, Prop 8 v.2 is going to win in 2010 — running away.

Yes, it’ll feel really fucking good to see the judges say what should be said — that you can’t vote away civil rights. But, pragmatically speaking, the best result is a blowout today, perhaps (or, hopefully) with a strongly-worded concur-in-part, you-people-who-voted-for-this-sack-of-shit-are-fucking-idiots-in-part… followed by a ballot-box reversal next year.

@SanFranLefty: She got some Repug votes at her last confirmation hearing. I think there will be some Repub woofing for the cable news shows, then she’ll get 70 votes and start looking for a place to live in D.C.

Meanwhile: oh hey look, Sotomayor! If memory serves, we might not have any Tri-Staters within the Stinque Lawyerz Caucus. If I’m wrong — what’s the skinny on Sonia?

And… the Corner is in. K-Lo repeats what somebody else said about a claim involving firefighters in New Haven and comes across with….

You’d think the president would have put at least a day between Memorial Day and nominating a judge to the Supreme Court who would bury the claims of firefighters — men who put their lives on the line in service for others — on the altar of political correctness.

And so Sotomayor (a) wants America to lose in Iraq and (b) kicks children of fallen 9/11 firefighters, just to watch them cry. (No, K-Lo didn’t say that. She said about four or five code words in fifteen seconds — and not an hour after the pick crossed the wires, yet — but she didn’t say that.)

This is going to be more fun than I thought.

And, it’s official: The New Haven Firefighter Case is now officially a thing. Whether this is on the level of “Barack Obama pals around with terrorists,” or is as loopy as “the birth certificate is fake,” I don’t know. But this seems to be the early favorite for the supposed smoking gun proving that Sonia Sotomayor is a dirty hippie.

Wendy Long of the Judicial Confirmation Network (whatever the hell that is) has this for our reading pleasure:

Judge Sotomayor is a liberal judicial activist of the first order who thinks her own personal political agenda is more important that the law as written. She thinks that judges should dictate policy, and that one’s sex, race, and ethnicity ought to affect the decisions one renders from the bench.

She reads racial preferences and quotas into the Constitution, even to the point of dishonoring those who preserve our public safety. On September 11, America saw firsthand the vital role of America’s firefighters in protecting our citizens. They put their lives on the line for her and the other citizens of New York and the nation. But Judge Sotomayor would sacrifice their claims to fair treatment in employment promotions to racial preferences and quotas. The Supreme Court is now reviewing that decision.

Well, I’m going to have to read that case now.

@chicago bureau: GW (JD ’97) – from Manhattan, I can say that she’s very well respected. I have had colleagues who’ve been in front of her, and they say she’s Calabresi smart. And she was appointed by GHWB. Fuck the Republicans.

@chicago bureau: Wow, didn’t take long for the 9/11 meme to get out there.