By the Way, We’re Still Doomed 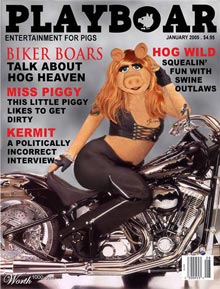 Just when you thought it was safe to resume fucking pigs, the swine flu is back. Not that it went away, but once we realized it wasn’t going to decimate the world population by week’s end, we got distracted by iPhone Myst.

Swine flu remains a “phase 5” threat, somewhere between contagious yawning and Black Death. Under World Health Organization rules — which some nations are challenging because it would be a bummer — if the flu spreads just a little more, we’ll have a grand old pandemic on hour hands.

The problem is that the virus isn’t following God’s Plan for weeding the garden of humanity. CDC guidelines, for example, cover typical settings like hospitals, nursing homes, and day-care centers. Nobody expected high schools to be the cesspools of Armageddon:

Teenagers, experts say, are different from the victims of seasonal influenza. The bed-ridden, the very ill and infants can be forced to practice good hygiene, or isolated or sent home if they won’t.

But teenagers resist tedious advice to wash their hands for 20 seconds, cover every cough with a tissue or sleeve and stay away from other teenagers. If school is closed, they are likely to get together at the park or the mall.

In other words, children may be our future, but teenagers will be the death of us.

New York remains under slow-motion siege, and Japan just entered the world rankings, jumping from four to more than 170 cases over the weekend. Worldwide, 8,830 cases have been confirmed in 40 countries, leading to 76 known deaths.

So no, we’re not quite partying like it’s 1918. And a typical flu season is still nastier. But until we’re better at teaching flu prevention than we are at sex education, you might not want to laugh Joe Biden out the room just yet.

Nations urge WHO to change criteria for pandemic [AP]

No Guidance on How to Rein In the Flu [NYT]

Kids!
I don’t know why they get so sick, kids today!
Kids!
Who can understand anything they say?
Kids!
They are disobedient, stubborn oafs!
Noisy, infected, dirty, lazy, loafers!
While we’re on the subject:
Kids!
They’ll will cough and cough till their face is red!
Kids!
But they still just do what they want till dead!
Why can’t they wipe their noses,
using a kleenex?
What’s the matter with kids today?
Kids!
I’ve tried to tell them the best I could
Kids! Kids!
Puking, sneezing, infectious, dying, morons!
And while we’re on the subject!
Kids! They are just impossible to control!
Kids! With their awful health and their rock an’ roll!
Why can’t we lock the shits in jail?
What’s wrong with their hygiene?
What’s the matter with kids today!

Ah, the stubborn stupidity of the typical teen will be the death of them.

Sounds like the nerds/geek/outcast teens will be the survivors. Is that a bad thing?

TJ: California stinquers, please go vote today on Arnie’s ballot initiatives. I’m vociferously opposed to 1D and 1E, but Mr. SFL’s union warns us that if 1A and 1B fail, massive layoffs of state employees (and there are a lot of them that do things that are important to a functioning society, not just paper pushers).

SanFranLefty: What’s the scoop on Arnie’s chances of survival?

(Not that I care so much about him, mind, but California Republicans do have a tendency of providing the nation with completely inferior political product. It really is a strange brew of libertarianism, xenophobia, vacuousness and fanatical Reagan worship — with a good amount of thumperism thrown in for flavor.)

@SanFranLefty: My fear is that after the recession, the states won’t hire again as the burdens of work will be placed on the survivors. This has happened at my state work place (BTW, I’m on a coffee break and I’m waiting on people to get back to me so nyah) where they’ve cut 300 positions and 30 actual people, including a friend of mine in my department. If government barely survives and functions without people, the guv’mint cutters and those who want to drown it in the bathtub will make hiring permanently frozen and furloughs a daily routine.

@chicago bureau: Arnie’s term-limited as Guvernator, and he’s been saying he doesn’t want to run for elected office again, but still he might try to challenge Boxer for her senate seat. His own party hates him.

Yesterday there was the first debate for the three Republicans for Governor. One didn’t show up (Meg Whitman), one made inane jokes and mocked his opponents and moderate Republicans (Steve Poziner), and one showed up with a dry erase board and charts on how to balance the budget (Tom Campbell). Naturally the one serious person is in last place because he isn’t a billionaire, he’s only a brilliant economist and attorney who was a moderate Republican in Congress. Apparently he’s the only adult running for Governor, GOP or Dem party.

This sort of thing didn’t happen before they started teaching Evolution in schools and banned prayer.