Stinque
Home Latest Comments Log in
If it smells, we’re on it.
Stinque
This is America.
Gotterdammerung 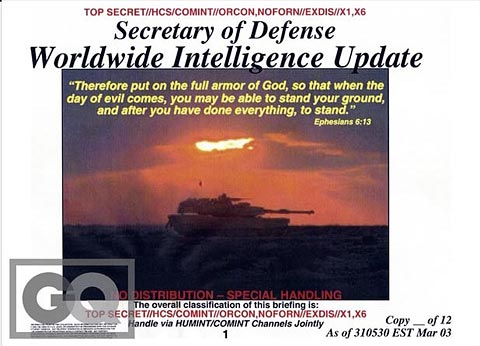 GQ has a slideshow of actual cover sheets used for intelligence briefings in March-April 2003 — when we invaded Iraq. They’re the work of Major General Glen Shaffer, and despite objections from within the Pentagon, Shaffer argued the bosses were cool with it:

When colleagues complained to Shaffer that including a religious message with an intelligence briefing seemed inappropriate, Shaffer politely informed them that the practice would continue, because “my seniors” — JCS chairman Richard Myers, Rumsfeld, and the commander in chief himself — appreciated the cover pages.

We’ll have to double-check our Gideon, but we weren’t previously aware of a Book of Quagmire.

And He Shall Be Judged [GQ]

Apparently god armor is a poor substitute for real armor on HMMVs.

@ManchuCandidate: Well, you have to go to war with the god armor you have, apparently.

Was going to post on this, but I’m glad you did. Too busy shredding out-of-date records because I can no longer simply recycle sensitive paper. And yes, I’m enraged that my tax dollars went towards the Loyal Bushies’ Crusade.

@blogenfreude: I didn’t think of this at the time, but I have a pass on any tax-funded atrocities completed during the LBC up until 2006.

On the other hand, I’m fully vested in the Yes We Can (But Maybe We Won’t) campaign.

Maybe the Christian Soldiers could use the services of this guy: http://www.orlandosentinel.com/news/local/orl-rapture-postman-joshua-witter-05142009,0,1981214.story

The teabaggers are fond of tossing Jefferson’s name around where it concerns the growth of the government. I’m sure he would be appalled to see this government so clearly in the grip of a state religion. This reminds me far too much of the Heinlein book “If This Goes On-” written in 1939 about America firmly under a theocracy. Here’s what he wrote later expounding on the theme (I added the bolding). Heinlein didn’t think to include the anti-gay gambit that worked so successfully:

“As for the second notion, the idea that we could lose our freedom by succumbing to a wave of religious hysteria, I am sorry to say that I consider it possible. I hope that it is not probable. But there is a latent deep strain of religious fanaticism in this, our culture; it is rooted in our history and it has broken out many times in the past. It is with us now; there has been a sharp rise in evangelical sects in the this country, in recent years, some of which hold beliefs theocratic in the extreme, anti-intellectual, anti-scientific, and anti-libertarian.

It is a truism that almost any sect, cult, or religion will legislate its creed into law if it acquires the political power to do so, and will follow it by suppressing opposition, subverting all education to seize early the minds of the young, and by killing, locking up, or driving underground all heretics. This is especially true whether the faith is Communism or Holly-Rollerism; indeed it is the bounden duty of the faithful to do so. The custodians of the True Faith cannot logically admit tolerance of heresy to be a virtue.

Nevertheless this business of legislating religious beliefs into law has never been more than sporadically successful in this country–Sunday closing laws here and there, birth control legislation in spots, the Prohibition experiment, temporary enclaves of theocracy such as Voliva’s Zion, Smith’s Nauvoo, a few others. The country is split up into such a variety of faiths and sects that a degree of uneasy tolerance now exists from expedient compromise; the minorities constitute a majority of opposition against each other.

Could it be otherwise here? Could any one sect obtain a working majority at the polls and take over the country? Perhaps not–but a combination of a dynamic evangelist, television, enough money and modern techniques of advertising and propaganda might make Billy Sunday’s efforts look like a corner store compared to Sears-Roebuck. Throw in a depression for good measure, promise a material heaven here on earth, add a dash of anti-Semitism, anti-Catholicism, anti-Negroism, and a good large dose of anti-“furriners” in general and anti-intellectuals here at home and the result might be quite frightening–particularly when one recalls that our voting system is such that a minority distributed as pluralities in enough states can constitute a working majority in Washington. . .

Impossible? Remember the Klan in the ‘Twenties–and how far it got without even a dynamic leader? Remember Karl Marx and note how close that unscientific piece of nonsense called “Das Kapital” has come to smothering out all freedom of thought on half a planet, without–mind you–the emotional advantage of calling it a religion. The capacity of the human mind for swallowing nonsense and spewing it forth in violent and repressive action has never yet been plumbed.”

@Dave H: Too sad but also so obviously true. The US was more free of this than most countries for most of its history.

The change started with the Chataqua and Revival movements of the mid-19th century, the rise of fundamentalism starting then and increasing through the very early 20th century, and then finally the alliance between the fundamentalists and the republicans under Reagan in 1980 made it a major mainstream movement, they think they are returning to original american values, when in fact they espouse an intolerance and a theocratic bent for more severe than ever in our history.

There is a fantastic treatment of this history in the book Anti-Intellectualism in American Life, which lays the roots of America’s characteristic anti-intellectualism squarely as the fault of the rise of fundamentalist christianity. “All the learning I need is in the good book” sums it up.

Aside from the content of these briefings and their cover sheets, why the over abundant use of italicization? Really!?

P.S. I lurve The Simpsons.
P.S.S. And King of the Hill. I asked Mr. SFL to get me a Texas-shaped clock like Hank Hill’s for my birthday.

But let’s, um, interrogate the premise. Another part of the story tells how, in the weeks prior to the war, the briefing covers used “humorous” imagery to lighten the mood. I’d love to see those. (Abstract generic supposition: Dilbert?)

But why not, oh, I dunno, the Defense department seal? Why all this effort to be “creative”? Beyond the absurdity of what was presented, there’s the absurdity of presenting anything at all. We’re entering Kubrick territory here…

5.o earthquake in L.A. tonight. Mrs. DB and I were at a play and the actors didn’t skip a beat.

@Dodgerblue: Some felt it in Sandy Eggo, but nothing noticeable at Stinque World Headquarters.

I called it as a 4.5 when it hit. I guess my seismographic skills have gotten dusty since the ’94 Northridge quake. One of the very scary things about that one was that the ground motion got more violent after the initial jolt, instead of dying down as usually happens, and as happened tonight.

@Dodgerblue: I’m impressed that you lowballed it. The usual habit is to overshoot the scale and double the duration.

I was living in the mountain above San Berdoo when the big desert quake hit in 2001-ish. That was a ride.

@SanFranLefty: I loved tonight’s Simpsons episode. They do such a good job of satirizing current events.

Aw fuckit… yes, yes in many ways it is and was since the beginning.

I so fucking hate these people… on both sides. It’s to bad we can’t just ship them off to a prison planet somewhere far from Earth and let them kill each other in the names of their respective gods.

I’m off to Sacramento this AM, or “Cow Town” as Phil Jackson calls it, for some 100 degree heat and a legislative hearing where no one will pay any attention to what I say. They will all be focused on a special election tomorrow here in CA for some crazy-ass state budget “fixes” that I’m dubious about, including borrowing against future state lottery revenues to pay current state operating expenses — an idea that no rational business would consider. California Stinquers, what say you — No on all, or what?

Been to Vacaville. Also Lodi, Turlock, Stockton, Modesto, Bakersfield and other garden spots in this great state. Did you know that the Bakersfield High School teams are the “Drillers”?

@Dodgerblue: I don’t suppose by any weird chance you were attending a perf of Hay Fever were you?

@Dodgerblue: When you get a chance, go on the Did You Feel It site and report what it felt like to you. It helps the scientists map the fault.

Oh, and don’t forget Fresno and Porterville and Victorville. Or Imperial County.

@JNOV: I was in a rental car driving on I-80 from Excremento back to Ess Eff, passing through Vacaville, and a huge truck hauling tomatoes spit a rock up on my windshield, resulting in a spectacular crack in it. I then had to call the rental car company, based in Boston, to report the accident. The conversation with the woman with the thick Southie accident as I tried to explain what happened was hilarious. She asked me why I didn’t chase the truck down or call the cops, I guess that’s what they do in Boston, but here it’s the price you pay for driving on the highway. She asked me “What’s a vaca” so I got to explain that one too.

@Benedick: No, “The Seafarer” at the 2/3 full Geffen theater near UCLA.

@Dodgerblue: I know the Geffen.

What theatre in LA is anything but 2/3 full at best? Unless, of course, Cats is in town.

An old buddy of mine is in the Hay Fever.

@chicago bureau: Rummy was always a natty dresser. The real reason he held stand-up meetings was so he wouldn’t crease his slacks.

Great line: the scripture quoted in these cover pages was “prostituting religion”.

Good thing Scumsfeld skipped over the whole ‘no bearing false witness’ and ‘no killing’ sections.

Initially I read that as “exposure”, and I did not want to go on living.

@chicago bureau:
GQ’s attracts/attracted a “higher” level of dude (sort of like Playboy in the skin mag trade) unlike the FHM and Maxim which strictly go for the Spike TV kind of crowd.

See, ManchuCandidate, I read your comment, and then I see GQ’s coverage (or lack thereof) on Evan Rachel Wood… and I am confused.

(I kid. GQ/Esquire are certainly more upscale. But still: copious amounts of thinly-veiled bewbies in your highbrow men’s publication.)