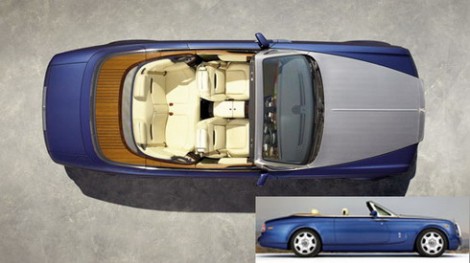 This is a Rolls Royce Phantom Drophead Coupe.  It costs a great deal of money.  Eddie Murphy has one, and so does Beckham. You can get yours with a brushed stainless steel hood and teak on the back, like a fine yacht.

And as sure as night follows day, some philistine has fucked one up. 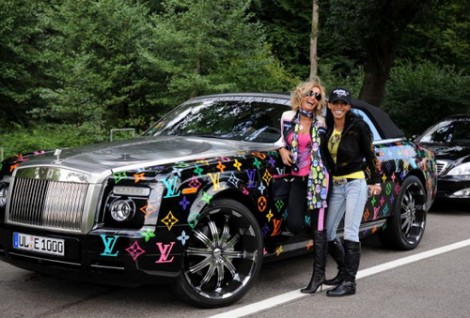 And who do you suppose is the author of this fuckery?  Meet Prince Marcus von Anhalt: 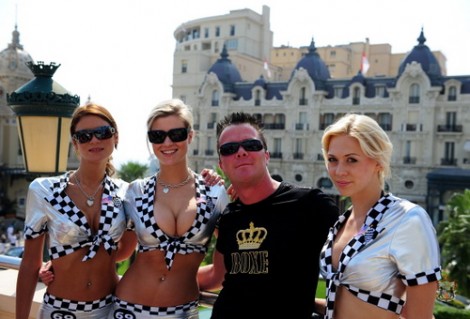 To be sure there’s plenty of competition for [the title of World’s Richest Asshole], but we think Germany’s Prince Marcus von Anhalt (above) has a pretty clear shot at it. Born Marcus Eberhardt in 1969, he started out as a butcher, went into the brothel business, did some time for tax evasion and human trafficking, then bought himself a title (from Zsa Zsa Gabor’s husband): Prinz von Anhalt, Herzog zu Sachsen und Westfalen, Graf von Askanien. Now the SOB’s latest stunt is driving around in this Rolls-Royce Phantom Drophead Coupe covered in a Louis Vuitton multicolored monogram print. 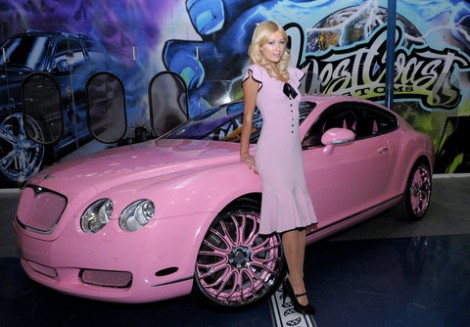 I disagree – I’d rather be seen in the Roller than in what’s left of that Bentley.  But driving either one would be sheer torture.

I’d rather take the 38-Geary MUNI bus (local, no less starting at the VA hospital and ending up 2 hours later at the Transbay Terminal) sitting next to the stinky homeless schizophrenic gutter punk who has a slobbering pit bull (a.k.a. his “therapy dog” allowed to go on the bus) than ride in either of those vehicles.

For real. For shizzle. Read a 38-Geary haiku or two if you don’t believe me.

@SanFranLefty: I picked the Roller b/c it’s almost certainly got tinted windows. No one would know it was you as long as you didn’t put the top down.

Vaguely reminds me of my bedroom door at the ancestral home.

SanFranLefty: Muni Haiku might be the best thing ever.

True story — my friends from the ancestral home of the Bureau came to Stanford to visit one time. Took them up to the City and showed them round. A yabba-dabba-doo time, it was. One highlight — hopping off the Haight bus (at Ashbury, of course), just as two guys were getting into a fistfight at the stop. “This is us!” said I, just as we were stepping down.

They were delightfully horrified by my cavalier attitude towards random, unexplained violence. But they should have known better, given my love of hockey. (And speaking of which, the United Center was so fucking loud last night at the Hawks game. I might need to buy earplugs if the Red Wings advance.)

@chicago bureau: the United Center was so fucking loud last night at the Hawks game. I might need to buy earplugs if the Red Wings advance. I stood in front of J. Mascis’ guitar amp stack a few weeks ago and am only now back to normal hearing. I can’t imagine a hockey rink being that loud.

A good sound hangover hits me for a day or two, max. I never, never shoot without at least 29 db ear protection, however. Going to the range tomorrow after a meeting in Albuquerque.

@redmanlaw: My neighbor wears ear protection when he mows his lawn, I use noise-filtering headphones so the engine doesn’t screw up my music during lawnwork.

I saw a pretty sweet Ford Falcon (vanity plate: “Marge”) on the walk to work this morning. Things like that make me wish that my cellphone had a camera (like this one, perhaps — only $50 after rebates and such).

Oh my FSM, that dude in the third picture (our “prince”) looks like he’s about 70 heartbeats (in his case, probably 45 seconds) away from a full-blown coronary. A face that red spells Ungesund in giant block capitals.