Stinque
Home Latest Comments Log in
If it smells, we’re on it.
Stinque
Cassandra was right.
Snakehandlers

Texas in the News 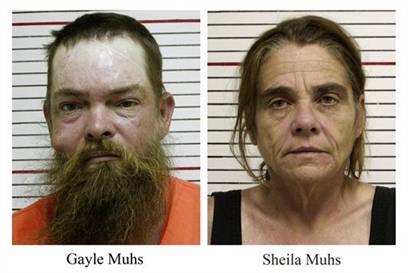 Another reason to let Texas secede:

HOUSTON — A 7-year-old boy died Saturday and a 30-year-old family friend was in serious condition after authorities said they were shot by a married couple who thought the off-roaders were trespassing on their property.

Donald Coffey Jr. died Saturday morning at a Houston hospital, less than two days after the boy was struck in the head with a shotgun blast, Liberty County Sheriff’s Cpl. Hugh Bishop said. 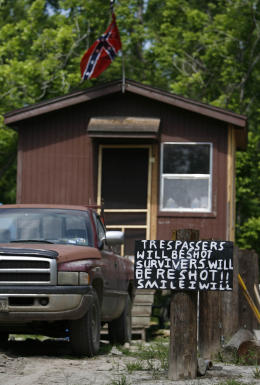 And check out this bit of tomfuckery:

The Houston Chronicle reported that suspects live in a small house on stilts with a rebel flag flying from the roof. A sign posted out front reads: “Trespassers will be shot. Survivers will be reshot!! Smile I will.”

I’m taking that no one goes to their house for Halloween.

Moving Austin is a small price for secession.

@Tommmcatt the Wet Sprocket: Meth kills. I think we can add those mugshots to Faces of Meth

@Jamie Sommers: Everything east of Harris County should be ceded to Arkansas or Louisiana.

Hey Bloggie, since I know you’re into the cars and such, did you see the photo of the douchesack with the Rolls Royce covered in Louis Vuitton logos?

@SanFranLefty: I did see it – was thinking about posting on it later. It’s not as hideous as Paris’s Bentley, but it’s pretty ghastly.

Having just done a lot of shooting with a shotgun at 40 yards getting ready for turkey season, it’s my opinion that you have to know what you’re shooting at that range unless it’s pitch black (but there was a full moon this past weekend), the target is obscured, or you’re out of your fucking mind on drugs or drink. Trespass is no reason to use deadly force.

The family will think about their little boy for the rest of their lives. What a tragedy.

The Chief Deputy described the shootings as “Ludicrous” which means to him they were comical or laughable. Bond for each Muhs was set at $25,000 for shooting four people. What kind of inhuman monsters are living there in Liberty County?

What do you want to bet that deadly force in response to tresspassing is legal in Texas? I bet these two walk.

@Tommmcatt the Wet Sprocket: Naw, two things against that: 1) the 911 call where she said she shot them because they were messing up the levee (public property) and 2) dead child. It’s one thing to shoot punks breaking into the house next door; it’s another to kill a little boy taking a potty break.

You almost want to believe its a methamphetamine-related thing. A doped up paranoid protecting a meth lab, thats, well, thats what happens when you criminalize drugs, you turn drug dealers into desperados. People facing 20 years will shoot anyone who comes near their meth lab, its understandable, even if still evil.

But the cops have certainly been all over the property by now, and if there is no news of a meth lab, then it seems these were just mean, angry, stupid, hateful, probably drunk fucks, and far more evil.

@Promnight:
You’re right. Without something like that, it’s a lot harder to get your head around.
What awful, disgusting part of our national character are they a distillation of?

@Promnight: My dad and I were deer hunting one time and he said “we should go over by Black Lake tomorrow” after we didn’t see anything where we were at. Being up on stuff as a reporter then, I told him that the dope harvest was on and that some booby trapped growing areas had been found there. I think I either found or read about some grow boxes in an area I was scouting last year for fall turkey hunting.

@mellbell: Deadly force for “defense” of mere property is fucking wrong, but some people attach a mythic status to property.

Here’s something I wrote a propos this subject some time ago.

@Serolf Divad: Here in New Mexico a kid killed his brother over the weekend when one kid thought he had unloaded his gun (they were rabbit hunting) before pointing it at his brother. A completely avoidable tragedy and one that will haunt the family forever.

Your piece is pretty funny, Mr Serolf. Can I post it on FB?

Very funny, but who is this “David Florez, linguistics professor” person? Alter ego, perhaps? Clark Kent to your Superman?

@Tommmcatt the Wet Sprocket: He’s one heck of a cunning linguist, whoever he is.