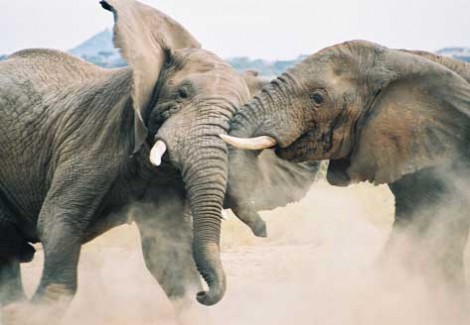 This is getting interesting:

Social conservatives are blasting the National Council for a New America, House Minority Whip Eric Cantor’s (R-Va.) nascent effort to rebrand the Republican Party, as a misguided and weak-kneed initiative that is out of touch with the GOP rank and file.

And why do you suppose the whackjobs don’t like it?

[S]ocial conservatives couldn’t help but notice that the policy areas the group will focus on included no mention of same-sex marriage, immigration or abortion. And the roster of GOP luminaries who signed on to the effort was missing a few of the pols who are most popular with values voters.

“The moderates have been saying the same thing all these years, and now they’re just seeing a renewed opportunity to push their ideas,” said Rep. Steve King (R-Iowa), a leading opponent of gay marriage.

Oh please – keep hatin’ on The Gays and brown people, and keep telling us that Blastocyst Americans have more rights than grownups.

Mike Huckabee, the former presidential candidate who was not invited to join the so-called GOP panel of experts involved with the effort — a list that included Govs. Bobby Jindal of Louisiana, Sarah Palin of Alaska and Haley Barbour of Mississippi and former Govs. Mitt Romney of Massachusetts and Jeb Bush of Florida — said that it was “sad day” in Republican politics when “we think it is necessary to form a ‘listening group’ to find out what Americans think we should be fighting for.”

“Our problem is not lack of ‘experts,’ but too many of them and not enough attention to the hard working people in our communities that aren’t connected to the Beltway, but to the heartland,” he said in a statement.

I am wondering how they determined that Mike Huckabee was out when they included sociopaths like Palin and Jindal.

Cantor has insisted that no slight toward any of the party’s constituencies was intended.

“The National Council for a New America is meant to be a wide-open policy debate,” he said Monday during a CNN interview. “There is no exclusion about what we’ll talk about.”

Still, for some the very creation of the council has proven to be a sore spot. Nearly a dozen conservative politicians and leaders contacted for this story either declined comment or did not return multiple calls.

“Too many Republican leaders are running scared on the claims of the left and the media that social conservatism is a dead-end for the GOP,” the Family Research Council’s Tony Perkins said in a statement. “If that were the case, why are pro-family leaders like Mike Huckabee creating such excitement in the conservative base? The Republican establishment doesn’t draw a crowd.”

Fuck Tony Perkins.  Fuck ’em all.  I am sick and tired of people who want to control our lives because they believe there’s an invisible man in the sky who cares about them.  Keep your fucking religion out of my life.  If you want to do something useful, take some of that money you raise from your snakehandling followers and help the poor.  Sounds like something Jesus would have done.

Exciting the base is one thing. Winning a general election is another.

I’d like to see a civil war between the Fundie Freaks and the Fizkal “Conservatives.”

In this corner, with the fire in his eye, twinkies in his mouth, searching for glory holes in the nation’s bathrooms and weighing in at 350lbs, James Jeebus.

In this corner, reading Ayn Rand and playing with his Laffer Curve, coming in at a whole 130lbs, Skinflint Moneybags.

It’s going to be nastier than priests fighting over an altar boy.

bloggie,
this is really making me giggle, picturing this group assembled. ok, it IS happy hour over here, still.

“there is no exclusion about what we’ll talk about” is killing me.
SANITY, how about not excluding SANITY!!!!

@ManchuCandidate: It’s going to be nastier than priests fighting over an altar boy.
COTWeek.
Well played, sir.
This infighting should be on pay per view. And we’re gonna need a lot of popcorn.

And the Republicans can’t do either, of late.

ManchuCandidate: You know, if the thumpers were going to up and leave the Republican Party, they would have fucking done it by now.

I mean, they have had a foothold in the party since the 1980s, and a stranglehold on it since the 1990s. And yet abortion is still legal, and teh gheys have moved up the equal-protection ladder from “rationally related” to “heightened scrutiny,” and evolution is still taught (most places anyway).

The public prayer thing is really interesting, though. So some student isn’t reading a prayer over a loudspeaker at school. Big fucking deal. Thebrains residing in the skulls of America’s Youth have the capacity to do great things. Cause kids to help old ladies cross the street, or plant trees, or share their cookies. Oh, and say a silent, unspoken prayer whenever the hell they want. And yet Black Eagle doesn’t have anybody over to the house to pray yesterday, and somehow he becomes a heathen. I don’t get it.

The point is that people have been predicting a split of the Republican Party for years. That’ll never happen. Thumpers are, by nature, followers — disciples, if you will. And moderates (both of them) are too mild-mannered to raise a ruckus and split off into a third party.

@Mistress Cynica:
..and drugs and alcohol to go with the popcorn!
would we be sober all the time if we didn’t have to witness these cretins?
hmmmm.

Ah, so the pigfucking jebustards are going to put out the fire with gasoline, excellent.

It’s the political equivalent of Satre’s “No Exit.” Neither of them want to be with each other, but yet can not live without each other. Too bad few if any in the GOP actually read it let alone understood it.

[S]ocial conservatives couldn’t help but notice that the policy areas the group will focus on included no mention of same-sex marriage, immigration or abortion. And the roster of GOP luminaries who signed on to the effort was missing a few of the pols who are most popular with values voters.

They’re right to object to this fact, because any conference that does nothing but sit around mouthing empty mantras about how the party “lost its way” over the last 8 years of unbridled fiscal irresponsibility is just going to look like a pointless circle-jerk. Running a “future of the party” discussion that ignores social issues altogether is like tossing open the refrigerator door to cool down your house. But social conservatives are insane if they think that a discussion of this sort that went this way would have any effect other than driving another nail into the Republican coffin. There’s no future in bigotry outside pockets of the deep South.

Mike Huckabee, the former presidential candidate who was not invited to join the so-called GOP panel of experts involved with the effort — a list that included Govs. Bobby Jindal of Louisiana, Sarah Palin of Alaska and Haley Barbour of Mississippi and former Govs. Mitt Romney of Massachusetts and Jeb Bush of Florida — said that it was “sad day” in Republican politics when “we think it is necessary to form a ‘listening group’ to find out what Americans think we should be fighting for.”

Huckabee’s right… it is a sad day for the Republican Party.

And that fact makes me smile.

You could totally work that up into a series of political cartoons.

TJ/ Bill Richardson does the stanky leg at a party with tribal leaders this week in New Mexico.

What is this “skanky leg” of which you speak? It is some heretofore unmentioned sex act?

A Stinque Conspicuous Bravery Medal is in order for this kid:

A student at a fundamentalist Baptist school that forbids dancing, rock music, hand-holding and kissing will be suspended if he takes his girlfriend to her public high school prom, his principal said.

Despite the warning, 17-year-old Tyler Frost, who has never been to a dance before, said he plans to attend Findlay High School’s prom Saturday.

Frost, a senior at Heritage Christian School in northwest Ohio, agreed to the school’s rules when he signed a statement of cooperation at the beginning of the year, principal Tim England said.

The teen, who is scheduled to receive his diploma May 24, would be suspended from classes and receive an “incomplete” on remaining assignments, England said. Frost also would not be permitted to attend graduation but would get a diploma once he completes final exams. If Frost is involved with alcohol or sex at the prom, he will be expelled, England said.

So: if this kid actually, oh, I don’t know, goes out and has a good time with friends, he will get punished. And, yet, he will do it anyway. Jolly good show, Tyler.

@chicago bureau: Dancing has been shown to lead to urges.

And Bloggie, just on your last paragraph, let me be the first to say: a-FUCKING-men!

@Dodgerblue: At first, I read that as Dom DeLuise and thought, “Again? Damn!”

@redmanlaw: Love the hoop dancer in the background. Would that be the stanky hoop?

Richardson better lace them dancing shoes up good. My old political friend and Sen. Udall’s daughter just got immunity in the pay to play investigation here:

@Jamie Sommers: “For advanced users only.”

@Serolf Divad: There’s no future in bigotry outside pockets of the deep South.
Hey now, you can’t put it all on the South, wignutty as it is. Don’t forget Idaho, Wyoming, and parts of Michigan, which all boast serious white supremacy/militia populations. Also, have you ever driven through Kingman, AZ? Terrifying.

@redmanlaw: I was waiting for him to start dry humping the lady’s leg. Nothing. You call that a Governor?

@Mistress Cynica: Or Southern Oregon survivalists, although I haven’t checked in with them lately.

But while you can’t blame it all on the South, everything else is an exception to the general rule. You’ll always have pockets of idiots in Idaho, but they’re not the basis for even a regional Bigot Party.

@redmanlaw: He sure dances white for a half messican/half nicaraguan.

@redmanlaw: So will Udall get sucked in by Bill R’s corruption?

@SanFranLefty: Udall’s a boy scout, while Amanda is one of the top operators in the state.