Stinque
Home Latest Comments Log in
If it smells, we’re on it.
Stinque
Mastodon: @stinque@mas.to
From the Stinque Kitchen

Beam Us Out of Here, Scotty 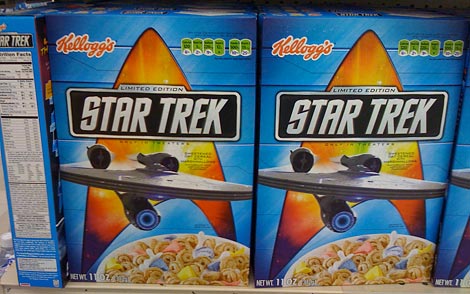 Klingons, Stars, and Phasers, Vulcans, and Blue Moons, Gold Lantinum, and Romulans, and me Red Shirts!”

I heard something on NPR this morning about a couple that was going to say their wedding vows in Klingon. That’s a step beyond spending the night in line to get tickets to the next shitty sequel.

@ManchuCandidate: I’m still pissed at the cartoon series, which introduced a childlike alien in a pointless effort to appeal to kids. As if we needed help.

@blogenfreude: Got my tickets online. The RMLs will be there to watch it in the digital format in 3 hrs. Gotta get in my workout now.

@blogenfreude:
Yes. Yes it is.

I openly admit to once being a Trekkie (increasingly awful sequels/TV series and stuff like the cereal killed it) and have a strong love for things Science Fictiony, but I’ve never spoken Klingon nor worn a costume.

Don’t get me started on Star Wars.

On the other hand, I would have bought Fruity Tribbles and Cocoa Tribbles.

I’ll be seeing the movie this Sunday.

I’ll be honest: I don’t remember much about the Star Trek movies beyond The Voyage Home. Not sure I even saw the last couple. But I’m hearing good things about this new one, and I like the premise.

I know a ‘gal’ who was a regular in that version version with the bald Limey who shouted. Does that get me cred?

@Serolf Divad:
Regarding the other ST movies, you didn’t miss much.

Hey! I think we drove away the ladies again…

Who can be the first to tell me how it is that the American people, in some sense, got our current President thanks to Star Trek.

@Serolf Divad: He was born on Cheron.

@ManchuCandidate: Next time, don’t insist they paint themselves green.

@nojo:
My bad. I also won’t wear Spock Ears to bed. I promise.

@Serolf Divad:
Got it. I thought it was a STAR TREK moment. Not a nasty divorce/ swingers club/destroy Barry’s GOP opponent and replace him with Alan Keyes moment.

I think that since everyone knew her from the TV series it helped push the scandal over the edge. People were less inclined to dismiss her as some crazy ex-wife. Thus the Star Trek connection… though it’s a little bit of a stretch, I admit.

@Serolf Divad: though it’s a little bit of a stretch

So was Jeri’s costume.

@Serolf Divad:
Of course, Jeri (7 of 9) was renowned for her acting abilities…

Oh. I was thinking metaphorically.

Well, I liked him better in Spenser: For Hire anyway.

(2006, England) Two people, 17 and 20, emulated Luke Skywalker and Darth Vader and fought each other with lightsabers. Only they didn’t have toy lightsaber s, so they made their own from fluorescent light bulbs. That’s right, they each opened up a fluorescent tube, poured gasoline inside, and lit the end… As one can imagine, a Star Wars sized explosion was not far behind. Both participants survived to confess to their creative, but stupid, film reenactment.

I have trouble determining if those are real.

@SanFranLefty: I always thought Trek was like Kerouac; chicks just don’t get it.

@Tommmcatt the Wet Sprocket: It seems to me there are different forms of geek. Some nerds, and I will say, I am a nerd, are gentle people, they have been kicked and pushed around, and the effect on them has been to make them more sympathetic to the downtrodden, more aware of the suffering that their actions can cause, it made them good people. The nicest crowd I was ever in was at a They Might Be Giants concert. Just nice people, whether gothy or punky or just nerdy.

But some nerds have an enormous amount of bottled up rage. And when they find themselves in a position of power, some of them make it their mission to get back at the world, they are just plain sadistic, the torment they suffered made them monsters. And it can come out sexually, from what I have seen some of the worst kinks, the dudes who get off on humiliating women, are the nerds who were, or felt, humiliated by all the rejection they got from women. They can be nasty.

So there is no generalization, geeks run the gamut. Like everyone.

@Nabisco: Baked is a dedicated trekkie, and has even gone to conventions. She may just be the hottest female trekkie ever.

True, true. And there are gay geeks, like me, who are woebegone creatures that must hide their love of comics and sci-fi from the other queens. I was lucky enough to meet another such geek to be my partner…our second date was to a comic book store….

@Tommmcatt the Wet Sprocket: The Damned do a version of a song originally by Love, Alone Again Or, which has a line that says “you can be in love with almost anyone,” and that is so true. Insecurity, need, sheer relief to find somone who loves them when they feel themselves unworthy of love (thats my dynamic through life) these things make some people so susceptible to falling in love with the wrong people.

But some are more confident, and are able to see beyond the initial attraction and romance, and still make rational judgments about who is right for them. And some insecure nerds like myself can finally learn, or finally just blindly find the right one through trial and error.

Thats what makes love so dangerous. The feeling inside is the same whether its a good match or a bad match, at least, the feeling is the same until its too late, all too often.

So I am gonna lift my glass and wish for everyone that somehow they find their true love, the right one.

@blogenfreude: My local paper, about 12 years ago, posted a wedding announcement, and the accompanying photo showed the bride and the groom in Star Trek regalia, the dude was a klingon. I cut it out and saved it, its around here somewhere.

@Nabisco: All of us loved it – the parents who grew up with it and the kid who knew nothing except that there was a Spock guy in it.

Forget the canon, though. It has its own reality. Thw digital projection system was *awesome*. Seek one out. So sweet.

even as a small child, the world so disappointed me that star trek was my hope for a better future. yeah they still had to deploy the foton torpedoes sometimes, but the phasers were generally on stun.
their mission, to seek out new life and civilizations, was a travel guide for me–which peaceful intelligent planet do i want to live on? and i’m still looking!
israel is starting to get old already, and i am not going back to T & C til AFTER hurricane season!!!!
i didn’t know at the time it was a groundbreaker, and it’s unfortunate it begat so much shlock, but i will proudly admit to owning a costume and speaking a little klingon. geekdom is an equal opportunity condition, so i throw my estrogen into the thread and wish james tiberious kirk was still at the helm, calming down the universe….and me.

Re: costume: Mini-skirt and for which branch (assuming OG Trek)? Notice how there were no yellow Command mini-skirts?

There’s a guy in a red suit on an away team in The New Movie, which is the best of the whole bunch, btw.

So much cheese in the movie you’ll want wine and crackers, but it’s very good cheese.

@baked: I meant to say this movie is the best of the star trek movies. Eye rolling Kirk as a kid stuff in the beginning is weak, but fun over all. The RMLs all liked it. Wolverine was actually a better movie.

@redmanlaw: Forget the canon, though. It has its own reality.

Does Christopher Pike have a cameo?

I always liked how they reworked the original pilot into a two-parter, but it tends to screw up the Young Guns approach. Supposedly Kirk didn’t know Spock when Spock was Pike’s science officer.

(Geek trivia: Who was a regular in almost all the series, starting from the pilot? And no, it’s not Nimoy.)

@baked: Hey, it’s a lovely time of year to visit your West Coast stinquers. Start in Sandy Eggo and work your way up to Seattle, from one fabulous stinque-up to the next.

@nojo: Cameo? Fuck, he’s a main dude in the movie.

@ManchuCandidate: @redmanlaw: Plus, to answer the trick question: She’s the voice of the ship’s computer.

NOJO • Welcoming Our New AI Overlords @JNOV: Jeez, thought I fixed that. I wish browsers would agree on return characters!