Blessed are the Bigots 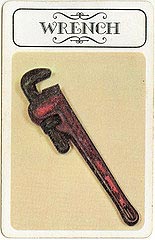 People don’t understand the dictionary — it’s called queer. Queer means strange and unusual. It’s not like a slur, like you would call a white person a honky or something like that. You know, God is pretty explicit in what we’re supposed to do — what man and woman are for. Now, at the same time, we’re supposed to love everybody and accept people, and preach against the sins.

We count greed, wrath, envy and pride, with a strong case for lust, a tossup for gluttony, and sloth something of a judgment call. Does Joe ever work?

I’ve had some friends that are actually homosexual. And, I mean, they know where I stand, and they know that I wouldn’t have them anywhere near my children.

Fair enough. We wouldn’t have Mr. Wurzelbacher anywhere near our children, either.

Q & A: ‘Joe the Plumber’ [Christianity Today, via Think Progress]

Could we please add “stupidity” to the deadly sins? Who do we need to see about this?

That last cite was “quote of the day” on my blog yesterday. And as I said there: what the hell kind of friends could they possibly be if you won’t let them near your kids.

Wurzelbacher and Sarah Palin are exhibit A on what’s wrong wit the GOP, and why party registration has been withered down to snake handlers who speak in tongues and survivalists stocking up on ammunition and drinking water in preparation for the looming race war.

@Serolf Divad:
the kind of friends who are “strange and unusual?”

Total TJ but saw something lovely in The Times (I know! Who knew?) and thought I would share linky click.

I never do this right but it should be here http://www.nytimes.com/2009/05/05/opinion/l05balduccis.html?emc=eta1 . It involves Balducci’s, Christmas and Garbo.

Why do these people always claim to have gay friends? And which gheyz in their right minds would be friends with Joe the Plumber?

@rptrcub: And which gheyz in their right minds would be friends with Joe the Plumber?

Teh republican party seems to have turned into the stupid liberation movement. Teh stupids are sick and tired of having their stupidity criticized all the time, and they are not going to put up with smart people thinking they are so smart, also, as well, with their grammar and such as.

If you are dumb and angry and you think anything too complicated for you to understand must be bullshit, then join the GOP! They’ve got simple, easy to understand answers for all the problems you have. No health insurance? Its the mexicans fault. Think your taxes are too high even though you actually don’t make enough to pay federal income taxes at all? Its the lazy nigras. Flunk out of school, your kids flunk out of school? Its those faggot unamerican socialist jew elites and their secular culture.

The easy answers? Guns and God. And trucknutz also, such as.

@Prommie:
As Alec Guiness sort of once said in some movie: The Stupids will be with us, always.

@Prommie: I forbid the use of truck nutz as a comedic tool on this blog. That shit is lame and needs to stay over at Brand W with the blingees and the other lame memes they have going.

@Jamie Sommers: Please excuse me, I forgot, our meme is “zombies.”

@SanFranLefty: As mentioned in the most recent post about DC recognizing ghey marriages, Ms. McConnell (R-KY lubricant, because he doesn’t know any better).