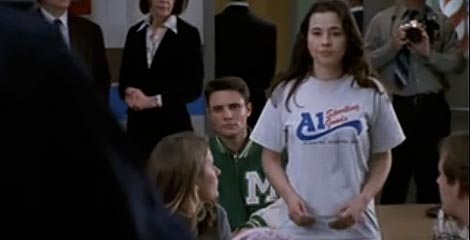 You’ve probably heard by now about Condoleezza Rice ducking a torture question from a fourth-grader Sunday, but this footnote catches our attention:

According to Misha’s mother, he originally planned to ask a tougher question — “If you would work for Obama’s administration, would you push for torture?” — but he was asked to change it. “They wanted him to soften it and take out the word ‘torture.’ But the essence of it was the same,” Inna Lerner said.

That moment may sound familiar to cult fans of Freaks and Geeks, the high school series set in 1981. In a late episode, Vice President Bush plans to visit the school and take questions from students, but the students are surprised to discover their pre-screened questions have been mangled before the visit.

YouTube won’t let us embed the video, but at 5:50 we find the following exchange:

“Mr. Vice President, my name is Lindsay Weir… My question is, Why did your staff reject my question? Are you afraid of an open discourse with the students?”

Short answer, then and now: Yes.

Kids say the most incriminating things.

Or, better yet: Ms. Rice, do you prefer Hanna Montana or The Jonas Brothers?

The press lets the Bush administration off, teachers compound the error … do we need a 9-year-old to host Meet the Press? Maybe there’d be some tough questions.

Well, you know that at least half the time, the really tough questions are coming from the parents, via the kids.

There is a similar plot point in That 70s Show. And yes I think Ashton Kutcher is brilliant. Ditto Topher Grace.

@Benedick: Never could watch that. I consider it dumpster-diving in my youth.

@nojo:
I didn’t mind the early shows. It was funny (if I can use that word) to see that Eric and Red’s relationship mirrored my father and I right down to me being called “dumbass” on a regular basis.

@nojo: It’s extremely well done. Of its kind. Very well written and directed and acted. To my great surprise I find I reckon it to be a pinnacle of USATV. And the two aforementioned gents are superb at what they do. Better than almost anything on Monty Python: a wasteland of oxbridge pseuds trying to be funny and John Cleese: genius.

Hey kids – re the book selection – I’ve been slammed today and will be doing work tonight but at some point will take a break and compile the suggestions and confer with Cynica re: selection. We can keep the list of nominees for future selections.

And Serolf and Bloggie can go do manly things instead of reading.

@SanFranLefty: I’m off to fed court tomorrow for another adventure, this time before a judge who cannot make up his ;alskdjf mind.

You can say “Fucking”, Dodger, we won’t think any less of you.

@nojo: An unnaturaley sanitized version of my past. I remember it as grittier. We were bad kids. Dazed and Confused is the most amazing re-creation of my 70s high school experience, just the truth, much more real than Fast Times, which comes in second.

Remember being completely preoccupied with remembering to be the first to yell “shotgun” as you get in the car?

@Promnight: the trick with that was not to care about it. I never mastered that trick.

@Tommmcatt the Wet Sprocket: “Say what, your Honor? Are you fucking kidding me? Did you read the brief that it took me two weeks to write, or just wipe your fat ass with it?”

How often I have thought this. May tomorrow not be another instance of judicial asshattery.

@nojo: The big ginger Jersey Girl on that show was worth the price of admission.
I know the show wasn’t supposed to be N.J., but look up her bio. She is pure Jersey doesn’t hide it for the show.

@Ewalda: I didn’t know she was a Jersey Girl. Strong woman.

@Promnight: So Say We All!

@Tommmcatt the Wet Sprocket: Ms Rice, can I sniff your face? My dad said I’d be surprised!

@All: Almost done in compiling the book list suggestion in between reading opposition briefs. Cynica and I are suffering from an abundance of brilliance, thank to all of you. We have to balance page length and timeline with the number of votes. Maybe some of the longer books can be announced now for August/September/November book club meetings (Serolf and Bloggie grunting in the mud separate from us, natch)