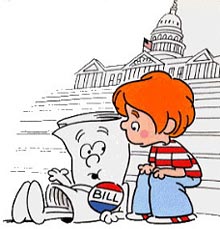 We already know the Senate is inherently undemocratic — Alaska gets the same two votes as California, after all.

We also know that in practice, the Senate is even more undemocratic — it takes 60 votes to shut down a filibuster.

But now that Al Franken is poised to claim that 60th vote for the Democrats (as well as claim another decade for himself), we got to wondering whether the Senate was still more undemocratic than we realized.

Comparing Senate seats to 2008 population estimates by the Census Bureau, Republicans represent 36 percent of Americans, while Democrats and fellow-travelers (including Franken) represent 64 percent. Averaged nationwide, each Democrat represents 532,991 more citizens than each Republican.

Or, if you’d like that in the form of a soundbite: Each Senate Republican represents 16 percent fewer Americans than each Senate Democrat.

So it looks like Republicans have enjoyed some bonus votes — three, to be precise. 57 Democratic Senate votes would represent 60 percent of Americans. And that’s not even questioning the legitimacy of the filibuster itself.

All of which is to say, the next time you hear the inevitable yammering about trampling on the rights of Senate Republicans, bear in mind that they’re already benefiting from affirmative action.

And the next time you hear a douchebag like Joe Scarborough insist that Americans are generally center-right you can correct him: no, America is about 64% center-left.

But that’s the only acceptable kind of affirmative action for the GOP aka the Friends & Family plan.

Isn’t it ironic that the man who led the GOP down the road to ruin was a beneficiary of eelight/riches affirmative action?

But wasn’t that the point? John Adams and his ilk wanted a means for the landowning class to control the power of the hoi polloi and came up with the senate – closely modeled on the House of Lords. And usen’t senators to be chosen by the electoral college and only came to be elected directly fairly recently? What better way to make sure that small, inconsequential states like CA don’t get lost in the shuffle when pork is being hurled from the housetops of Georgetown?

And, darling, you can perhaps make a case for this being America’s greatest sham (Madonna’s new-minted English accent might run a close race) but the world’s? Hardly.

@redmanlaw: I see what you did there.

I immediately thought of you when I saw this; it’s frakkin’ awesome. Enjoy!

Gotta say it — if they can make Perez Hilton into Lord High Queen, they may score some points.

Meanwhile, back on topic — the Senate was just fine back when Democrats put up roadblocks against stuff. True, they did that, maybe, once in the past decade, or maybe twice, but we didn’t complain when we did. In fact, us dirty hippies were fucking overjoyed when they did it, and laughed ourselves silly whenever Hatch whined about not getting a handful knuckledragging judges seated.

@chicago bureau: My favorite part was the press release from the Miss California pageant officials with two misspellings in it.

@Mistress Cynica: And they left off the post script: Oh, and we want her boobs back.

@Original Andrew: So if I’ve got this straight, the Simpsons takes place 150,000 years ago, and Maggie is the hybrid child from whom we all descend.