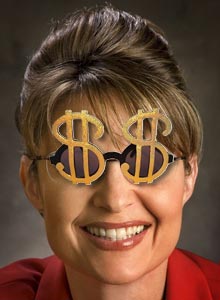 Everyone else is doing it, so why not us? Buy something via our Amazon kickback link, and 100% of the proceeds will defend our ability to continue posting about Sarah Palin!

What? You haven’t heard of the other Talibunny Defense Funds? Well, there’s the “official” fund, but you can’t throw money at it, because it doesn’t exist yet. And then there’s the unofficial fund, which launched Tuesday and prompted alarming! emails Wednesday from both SarahPAC and Team Sarah, telling us to keep our wallets holstered.

But with our fund, you can get a Kindle! You’ll have to pay for it, of course, but that’s still a better return than our competitors. We love the free market!

Somewhere at the heart of this shell game is Clayton Paslay, who we’re told is a well-meaning “Texas businessman” just trying to lend a hand, although his PAC shows him with a Pacific Palisades address. That would put him just 14 minutes from the Penmar Golf Course in Venice, where he won $14 for the fewest putts in a 2007 “Weekend Warriors 2nd Saturday Skins” tournament. Congratulations!

Paslay must scream down Palisades Beach Road to get there, since he also apparently has a pressing issue with seat-belt laws:

It used to be “Buckle up for Safety!” Now, confinement is mandatory!

If we don’t self-confine with our safety belts, we are treated as criminals: tickets and fines are issued. And if we do not pay these fines (or taxes), then the forced confinement WILL begin!

And if that’s not enough to prompt you to give generously, Remember the Rubbers:

American public schools pass out condoms to our children!

When did sex education including values and abstinence get ripped from the hands of parents and get placed by the government into the public school system? Our property taxes pay for these schools but if we want to keep our children modest, sexually conservative and wholesomely educated, we have to educate them in our own homes or in private schools!

Just keep them out of Sarah Palin’s home, if you know what we mean.

Really, spare yourself the headache and just buy the Kindle.

@Serolf Divad: I got my chequebook out.

Hey, he sounds honest… no, really.

And about seat belts. Well, as a douche in Nebraska found out in one of the most ironic deaths ever, freedumb ends where the windshield begins.

TJ/ I think we have found a candidate to be the new leader of the GOP.

I miss Michael Steele. Make him come on TV and say stuff.

Speaking of defense fund(ing) — see what I did there? — my brother-in-law is going to be on Talk of the Nation today, opposite Sen. Saxby Chambliss (R-Ga.), to talk about the new military budget. I hope he lays on the Mississippi accent real thick, all the better to show up Sen. Foghorn Leghorn.

He and Kitty Harris should do a variety show. They could open with a duet of “Memories” from Cats, in honor of Steele’s soon-to-be status as the Ex-Chairman of the Republican Party.

@Tommmcatt the Wet Sprocket: Oh pleeeeeeeeeeeeeeeeeezee! Just the thought of it has driven away all the sad i haz from paying my taxes. Which is what I should be doing instead of wasting time sharing here.

Ad on left is for SarahPAC – we’re taking their money!

And if this douchebag doesn’t want to wear a seatbelt – fine. As long as he promises my tax dollars won’t go to keeping him alive on a ventilator for thirty years, he can remove the airbags from his car as well for all I care.

mellbell: I would pay Big Munnie to see Sen. John Cornyn say “nice girl, but about as sharp as a sack of wet mice” in re Hillary — introduced, of course, with a sentence that begins “what — I say — what in the….”

Foghorn Leghorn tells me more about the South than William Faulkner does. Something sad in that, but there it is.

@chicago bureau: My favorite WB character hands down. “Nice boy, but his tongue’s flappin’ so much he’s gonna get it sunburned!”

@chicago bureau: “As dumb as a box of hammers.”

Dodgerblue: “As subtle as a hand grenade in a barrel of oatmeal.”

i LOVE when people don’t wear their seatbelts!
that herd needs a good thinnin!

what balls to say:
“American public schools pass out condoms to our children!”

“When did sex education including values and abstinence get ripped from the hands of parents and get placed by the government into the public school system? Our property taxes pay for these schools but if we want to keep our children modest, sexually conservative and wholesomely educated, we have to educate them in our own homes or in private schools!”

@SanFranLefty: Sorry to hear that! Mine is still around and doing okay, but it is not a good business to be in right now.

And last fall I hesitated about pitching Amazon, until Lux Mentis gave blessing. Besides, usually I only buy DVDs and software there.

Our local independent bookstores don’t carry books on hunting, fishing and shooting, just wildflower guides in their “outdoor” sections so Borders (their 25-40% off coupons rule) and Nicholas Potter Books (a great used book store) a block from my office gets all my money in those areas. Mr. Potter, btw, was mugged a few weeks ago as he left the bookstore.

I’m pretty fond of my local used bookstore, Ophelia’s Books (named after the now-deceased bookstore kitty, Ophelia). It’s a great place to browse, and I inevitably come out with 3+ books I didn’t know I wanted.

Never fear on the cat front, though, she’s got two more, Oliver and… I forget the other’s name. Both cute, though. Oliver is a skinny black cat who likes to escape out the door until he realizes how SCARY it is out there, and the other one is perfectly content to lie around, ideally directly on whatever you’re doing.

Once again nojo teases me with the Kindle. But I see that Digg business is gone and nifty FB and Twitter dealios have appeared. Huzzah!

Penmar? Then perhaps he is not wealthy. Does that make him more likely to be a scammy scammer using the dread visage of the Talibunny to help pay for his next tee time? What about the Texas Business Man who is not from Texas?
It would seem self-evident, but I heard that Palin says she knows nothing about it, and that means it is likely that she does know something about it.
She confuses me so much.

@Jebediah: I think he’s crazy enough to be legit, but thoroughly clueless about how these things work.

However, I also think he’s providing an opportunity for real scammers — like us! — to get in on the action. He may be honest, but the next scoundrel won’t be. And thus we turn a new chapter in a fascinating ongoing cultural saga.

@IanJ: I’m sensing an O trend with kitty names at the bookstore so I’d guess the other kitteh is named maybe: Olivia, Othello, Otto, Oprah?

Speaking of Otto, A Fish Called Wanda on fancy DVD version was among my Amazonian orders. I had the movie on VHS and watched it so many times the tape broke. Also ordered the deluxe edition of one of my other favorite all time movies, Shawshank Redemption.

Fuck it. Condoms and seat belts for all, and if you don’t want to wear a condom, don”t fuck a stranger!

And if you don’t want to wear a seat belt, let me administer a flayed chest to you with a sledge hammer and then grind small cubes of safety glass in your face.

All this talk of rubber(s) and (seat)belts is getting me bothered, in a good way.

I just recently started using Amazon again after a boycott of many years because of Jeff Bozos’ hefty donations to GOP campaign chests. But in the end convenience trumps politics, and Amazon has more obscurities available than BN, and anyway no matter whom they contribute to they’re all big corporate evils and I don’t care anymore now that Obama has sold us all out to Wall Street, what’s the point of trying to be a responsible consumer?

I’ll try to remember to enter the Amazon from Stinque from now on.

@SanFranLefty:
oh sister, wanda and shawshank make my top ten of all time.
which brings us full circle.

“Wanda: [after Otto breaks in on Wanda and Archie in Archie’s flat and hangs him out the window] I was dealing with something delicate, Otto. I’m setting up a guy who’s incredibly important to us, who’s going to tell me where the loot is and if they’re going to come and arrest you. And you come loping in like Rambo without a jockstrap and you dangle him out a fifth-floor window. Now, was that smart? Was it shrewd? Was it good tactics? Or was it stupid?
Otto West: Don’t call me stupid.
Wanda: Oh, right! To call you stupid would be an insult to stupid people! I’ve known sheep that could outwit you. I’ve worn dresses with higher IQs. But you think you’re an intellectual, don’t you, ape?
Otto West: Apes don’t read philosophy.
Wanda: Yes they do, Otto. They just don’t understand it. Now let me correct you on a couple of things, OK? Aristotle was not Belgian. The central message of Buddhism is not “Every man for himself.” And the London Underground is not a political movement. Those are all mistakes, Otto. I looked them up.”