Stinque
Home Latest Comments Log in
If it smells, we’re on it.
Stinque
Assholes, they do vex us.
Wingnuttery

A teabagger’s fax to members of Congress. 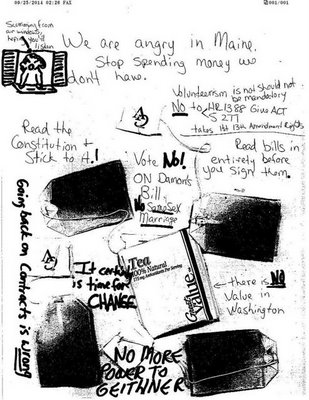 At least they spelled Geithner correctly. Still, I think it’s time for a full psych workup.

I want to shove a copy of the Constitution down these people’s throats.
Fuckwits.
This lot would applaud GW Bush raping their daughters but godammit if you give one poor person health care..

“Volunteerism is not should not be mandatory.” Wow, that’s some interesting syntax. Not to mention that the very concept of volunteering implies that one chooses to help others, as opposed to being forced to help others. Being forced into national service used to be part of this great land, but it was called the “Draft” back then. Only those who covet a world based on 1984 doublespeak would even conceive of mandatory volunteerism.

“Read the constitution and stick to it.” Now THERE’s an interesting concept. I trust he sent the same request to the Dark Lord and Caligutard as well. (Sound of crickets….) “Bueller?”

Powerful! I am a huge fan of outsider art. I cannot wait to see their ‘zine.

Nice photo of the men’s room wall at the Cato Institute.

@smapdi: I, on the other hand, think these people are great. Endless blogging material, and chances are they’re not dangerous. I doubt anyone xeroxing teabags will pick up a weapon and start a militia. But if I’m wrong ….

@blogenfreude: They are able to fax tea.
I can’t fax tea.

I dont think they are dangerous, just hypocritical and eager to do something that doesnt involve them leaving the swivel chair in their home offices.

Allison on America’s Next Top Model looks like the sad big-eyed kitteh Nojo featured last week had sex with a squirrel and produced this “model” for Cycle 12.

@SanFranLefty:
Is that an actual foto?

@Mistress Cynica: @ManchuCandidate: Yep, she really looks like that, and barely escaped Tyra’s axe this week.

@SanFranLefty:
How do can you tell when she’s surprised or shocked?

That could easily be a man….

@SanFranLefty: They didn’t axe her? Who did they get rid of that looked more unnerving?

@drinkyclown: One of the other blonde white chicks was axed. I’ve been watching this cycle (I hate that word versus “season”) very intermittently because all of the models-to-be are excruciatingly boring and all are borderline Team Short Bus to School. Every week that I’ve seen, the judges bitch about how boring and untalented this crop is.
@Tommmcatt the Wet Sprocket: No, that was last season when they had the MTF trannie on ANTM. Who was better looking than 75% of the competition.

@SanFranLefty: Christ, what inbred county have they resorted to scouting in? Though, I’d pay money to see her and Bachmann in a staring contest.

@SanFranLefty: Boring is unforgivable in reality television, you need to BRING THE CRAZY to keep anyone watching.

I’m shocked — shocked I say — that none have so far come up with a teabagging joke.

Obviously, I was too lazy to come up with one myself.

Where were these douchebags when Bush was spending money we didn’t have on stuff we didn’t need? Oh… that’s right… he’s a ‘publican. He gets a free pass.

What bothers the tea baggers isn’t the fact that Obama is borrowing money to pay for a Keynsian stimulus program that might prevent the nation from falling off an economic cliff (the edge of which we reached under a Republican president). What bothers them is the idea that he might succeed and thereby put the nail in the coffin of the argument over whether Democrats of Republicans are better stewards of the nation’s economy.

Let me give a huge shout out to the stimulus package and what it means to folks in my world–I help people get public benefits and I got to tell 76 year old Ms. Shirley yesterday that her food stamps went up from $68 to $180 due to Obama’s socialist policies!!! Now I know she will probably put those into her off-shore account in the Caymans, but….she said she wanted to go buy some meat since she hadn’t bought much since her stamps had been cut in January.

@cuthbert: Good for you. And good for her.

In college, I took this Human Sexuality course, and they said there that a “disproportionate” amount of Female Models have a condition called “Pseudohermaphrodism”, in which, while biologically male, they are not responsive to the testosterone their bodies give off and therefore do not develop the peen in the womb- what they have instead is a vagina with no uterus and undescended testicles. This condition is detected at puberty when they don’t have their first period or develop breasts. The genes that cause this condition tend to make you very tall, and very thin…hence the modeling.

I found that interesting.

@Tommmcatt the Wet Sprocket:
The dddddude looks like a lady?

Is this why I don’t get all hot and bothered by most fashion models?

@Tommmcatt the Wet Sprocket: I took human sexuality in college as well. There was a lot of beer and awkward mornings involved I’m afraid, but I learned a lot!

I immediately thought “hyperthyroidism”, because of the bug eyes, but the pupil dilation is the really creepy part.

We’re seeing the first trickle of stimulus effect all around…Wall Street is up right now (at least at 7:28 pst), due in part to the fact that Wells-Fargo is reporting that it will beat its’ first quarter earnings projections by almost 2-to-1 (which means that the government will get some of the money they put up to save them back, by the way). State initial claims for jobless benefits dropped by about 20,000, although unemployment is still crazy high.

Too early for much enthusiasm, but still, go Barry!!!!!

@Tommmcatt the Wet Sprocket: I don’t think we had to give Wells-Fargo money to bail them out–they were one of the few big banks not failing–though we may have helped with their rescue/acquisition of the failing Wachovia.

Sure we did! 25 billion. Don’t you remember the Vegas Vacation kerfluffle?

Yeah, we gave Wells Fargo $25 Billion during the first round of TARP funding. The only way one could eff that up is if their initials spell A-I-G.

I just had to share the following ’cause it’s beyond insane. We receive Fortune magazine delivered against our will to the office, but I read it anyway so that I can get inside the reality-immune, narcissistic cesspool that passes for Wall Street’s mindless financial acumen these days. In the current issue (April 13th), there’s an article (“The Impostor” page 59) that contains passages that are simply astonishing in their newly found accuracy. I had to read it three times and check the cover to make sure that Alternet hadn’t started publishing a weekly. To wit:

The biggest fraud of 2008 was metaphorical: the nation’s
economy itself, which had been built upon house-of-cards financial products. The most tragic fraud of the year was Bernie Madoff’s decades-long Ponzi scheme, which gulled charities, widows and orphans out of tens of billions of dollars while whistleblowers blew themselves hoarse before deaf and dumb regulators.

I can only imagine the reaction of the Free Market Supremacists: Thanks for the update, Herr Marx; will Chairman Mao be editing the next issue? It reminds me of that delicious Barbara Ehrenreich quote about how capitalism has decided to celebrate the 160th anniversary of the publication of The Communist Manifesto by dropping dead.

I never in a million years thought I’d be reading a POV like that in Fortune. Hell, it could have been lifted verbatim from my comments.

…And the shift to the left, however slight and imperceptible now, has begun. I’m starting to think Marx was correct: All economic systems are merely stages of the inevitable progression to some form of socialism.

Frankly, not that there’s anything wrong with that.

Didn’t he also say that all democracies eventually become kleptocratic oligarchies? Or was that Trotsky? That part hasn’t been a laugh riot.

On behalf of the non-whackjob population of Maine, I apologize. We do have more than our share of short-sighted, dogmatic, militiaish folk.

It is, I am certain, pure coincidence that when the government wanted to investigate the inter-generational effect of in-breeding, two of the three sites where here in Maine [wry smile].