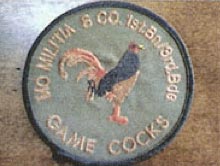 Following blogenfreude’s post yesterday about the Pittsburgh cop killer, redmanlaw alerted us to some curious comments at Raw Story’s report:

This is clearly looking like a Hit job MIAC style to make us all look bad.

this is nothing more than a hit piece and makes RS no better than MIAC report.

For all you fake ass liberals, go to youtube.com search a REAL liberal, Dennis Kucinich, finally actually sounding like those targeted in the MIAC leak.

We’re not sure Kucinich sounds like a cat on the verge of puking, but apparently MIAC has another meaning altogether — it’s the Missouri Information Analysis Center, one of 58 federally supported fusion centers that collate and distribute “threat related intelligence”. Fusing the fusion centers is the Department of Homeland Security, so we understand if some folks are a tad creeped out by the enterprise.

For that matter, connoisseurs of historical irony will appreciate the fact that instead of J. Edgar getting his panties in a bunch over Lefties, this round involves MIAC sounding the alarm against the very radical right: the militia movement.

And if you stick around, there’s even a Nixon reference.

The MIAC Report itself is an eight-page document issued February 20, and leaked online soon after. Most of it is a handy historical backgrounder on the evolution of militias over the past generation, their violent actions, and the sources of their discontent today — strip away the official label, and it could be a FAQ for the neonazi Stormfront website, where cop-killer Richard Poplawski posted pictures of himself.

There’s even a chilling premonition of Saturday’s shooting:

You are the Enemy: The militia subscribes to an anti-government and NWO [New World Order] mindset, which creates a threat to law enforcement officers. They view the military, National Guard, and law enforcement as a force that will confiscate their firearms and place them in FEMA concentration camps.

But that’s not what created a stir among the stir-fried a few weeks back. We’ll let wingnut digest WorldNetDaily take it from here:

The report warned law enforcement agencies to watch for suspicious individuals who may have bumper stickers for third-party political candidates such as Ron Paul, Bob Barr and Chuck Baldwin.

It further warned law enforcement to watch out for individuals with “radical” ideologies based on Christian views, such as opposing illegal immigration, abortion and federal taxes.

Well, not exactly. There is an illustrated section on “Common Militia Symbols” (such as the Fightin’ Game Cock here), and it does reference Paultards et al., but it’s descriptive, not phrased as a warning or call to action. But if you’d like to note that Profiling cuts both ways, we won’t stop you.

In any event, after the MIAC report was leaked and Glenn Beck got a segment out of it with Penn Jillette — almost prompting us to burn our copy of The Aristocrats — Missouri’s top cop retracted the document, and the state’s governor blamed his predecessor’s administration for it.

And that’s where it stood. Until Saturday.

nojo
7:00 am • Monday • April 6, 2009
comment »
Choose Your Delusion
You Can’t Handle the Truth Eliot Spitzer Has Not Been Whoring Since He Was a Toddler.
27 Comments
Serolf Divad

OMG, a bunch of conspiracy-minded gun nuts react to one of their buddies’ schizophrenic, murderous rampage by positing that it was part of a governmental conspiracy to make them look bad. It’s all so reassuringly… symmetrical.

Remember boys: if it doesn’t fit your world view then there must be a ZOG conspiracy behind it.

@Serolf Divad: So did the cops shoot themselves in the head with this guys gun? Or did Obama make a pit stop on his way to Turkey to do the dirty work himself? I look forward to the conventions of the 4/4 Truthers.

@ManchuCandidate: Thanks. I didn’t want to appear dumb by asking. Or maybe that makes me smart. Probably a tossup.

@ManchuCandidate: I’d like to echo HF’s thank you. I too didn’t like to ask what ZOG was. (I’ve been rereading Alan Furst novels lately so King Zog of Albania was the the only Zog that sprang to mind.)

@homofascist:
@lynnlightfoot:
@SanFranLefty:
No worries. I once spent time trolling on conspiracy websites in the early days of the public intertubes, somehow I ended up on a mailing list (don’t know how as I never sent a message) and got sent some Wingnut screeds (contents usual racist, anti semitic, anti-librul, anti-woman, black helo, homophobic, krazee eyed white supremacist bullshit) that I read. I replied that I was a member of a librul watchgroup and suddenly it stopped.

Looking back, I kinda wished I never knew what ZOG meant either.

SanFranLefty: I read that a little quick and thought that this referred to General Zod. As in: “KNEEL BEFORE ZOD!” (Of course, Zod and his crew were jack-booted thugs too, so I guess it kind of works.)

But also — Penn Jillette? Man… we need to talk.

I mean, I get your libertarian/freedom thing. I appreciate it on many levels. But… dude! Glenn Beck and tax protesters (read: cheap bastards that use the guise of political activism to disguise the fact that they are cheap bastards) do not need your support. Same for guys who think that the government really is going to take guns away from people.

Think for a second — gun control is the reason why they invented the term “wedge issue.” It’s an issue only in a technical sense — it doesn’t get resolved, and is designed only to divide people. The GOP is never, ever going to ban abortion on a national level, because if they did, they would not get elected again for another thirty years. Nor are Democrats going to confiscate everybody’s guns.

BTW: Don’t you think that, if there were to be a North American Union, they could have picked someplace other than Kansas City as the nerve center? Really. Kansas City isn’t even the center of power in Missouri. (Or, for that matter, Kansas.)

“Pyongyang’s state media claimed again Monday that the rocket put an experimental communications satellite into orbit, saying North Korea’s people were carried away by ‘great passion’ over the news.”

As well they should. If anybody deserves cable TV, it’s the North Koreans. (500 channels featuring songs of praise for the Dear Leader really are required — having only two channels results in crushingly boring TV.)

And, of course, the inevitable result of a loss in Sport: match fixing. Cliched, to say the least.

@chicago bureau:
As a youngin, my parents once sent me to “Korean” reeducation camp for lazy North American offspring of Koreans in South Korea for a month. The highlight of the visit was a tour of the DMZ and a NK infiltration tunnel. One of the freaky things we were told was that no one uses binoculars in the ‘Z because the NKs had a habit of shooting at shiny things so we had to look through periscopes.

Anyway, I saw a 60ft bronze statue of Kim Il Sung sitting in the middle of an NK minefield. Apparently, the NKs sent a cleaning crew every day to clean the bird shit off the statue while propaganda songs played in the background imploring ROK troops to defect to Korean paradise.

@chicago bureau: How the satellite can do that from the bottom of the ocean I’ll never understand.

@ManchuCandidate: The tunnel tours are now part of a tourist package you can pick up in Seoul. I actually shook Dubya’s hand in 2003 inside the DMZ, when he and Kim Dae Jung inaugurated the opening of a new end-of-the-line train station. Ironically, a North Korean snuck across the line and defected to the south while we were waiting for our respective Dear Leaders to show up.

@chicago bureau: The match thus turned into a theatre of plot-breeding and swindling. Red Smith couldn’t have written a better line.

blogenfreude: You know, anything — King’s “I Have A Dream” speech, Lawrence Welk, Britney Spears, communist propaganda songs, anything at all — sounds terribly amusing when played underwater.

“North Korea coach Kim Jong Hun made the allegation after his team lost 1-0 to South Korea on 1 April. Seoul has denied the claim. ”

BTW, there was a ticket presale last week to see U2 in Zagreb on August 9.

@Prommie: These are awesome. Frightening, but awesome.

Nojo, Protect the Hamster! (I don’t think that neighbor works for the Boston Red Sox….)

Okay, so I read this MIAC report. The overwhelming feeling I had reading it was “Do they not have spell check or teach basic grammar in Missouri?” I can’t believe that was actually a document created by a government agency, holding aside the shitty production value and layout.

Oh and I cracked up at the idea of Kansas City being the center of the NAU.

And your hand hasn’t withered yet?

@nojo: Nope, but I haven’t had hemorrhoids since!

@Nabisco: Do you have a photo of the handshake for a future Jam?

@SanFranLefty: I have a blurred snap of the Boy Blunder before he waded out into the crowd. The guy next to me – who was easily 6’5″, 250 lbs – even got a nickname; “Tiny”, natch.

@Nabisco: Shrub didn’t give you a nickname? Or is that the source of “Nabisco”?