Stinque
Home Latest Comments Log in
If it smells, we’re on it.
Stinque
This is America.
Compassionate Conservatives

Feeding on the Blood of the Living 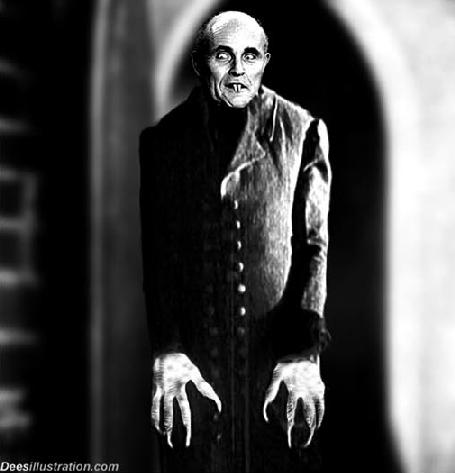 I can’t tell you how happy this makes me:

The firm’s client list has thinned out in the past few years, as have partner salaries, the sources said. Some partners have left, and some support staffers let go.

Sorry for the staff – fuck the rest of ’em.

The former mayor himself is infrequently there, the sources said, adding that he’s still working the speaker’s circuit hard and making international trips. He spends much of his time at his law firm, Bracewell and Giuliani.

Giuliani Partners insisted that the reduction in salaries was “not true” and denied that the company is in peril.

And the Titanic was unsinkable too.

The firm declined to name its clients or say how many it has.

The fate of Giuliani Partners is a subject of major discussion in political circles, at a time when the former mayor has told Republican leaders he’s mulling a run for governor.

Privately, several Giuliani boosters noted the bad economy is impacting every consulting firm. Some said not having a raft of new clients could be helpful should he run for statewide office — since his business dealings become fodder for opposition research during the presidential run.

Giuliani built a major international brand in the wake of the 9/11 attacks.

But his costly presidential run flamed out in the Florida primary in January 2008, and the firm has never reverted back to its old form.

The firm is down to about 30 employees from the 60 it had about two years ago, officials said. They acknowledged that the number includes support staff, but insisted it’s more on par with how the company looked when it was first founded.

If he becomes governor, where will I flee?

Sorry to link to the New York Post, but they had the story.

When I saw the headline and the photo, I thought this was going to be a post about Cheney.

Awesome photoshop. I take my head off to you.

And speaking of the undead…

All 66 books are now in the system for your zombifying pleasure, split by chapters.

I’m still geeking the sucker, working on boilerplate text and whatnot, but we remain on schedule for an April 12 launch. If you’d like to get some early licks in, but feel overwhelmed by the prospect, there are plenty of Psalms and Proverbs available for snacking.

@nojo: I believe I will head straight for Revelations. Where else would zombies be more welcome?

@blogenfreude:
“Revelations” is a mistake. Adding zombies to: the four Horsemen;the number of the beast;the antichrist; famine; nuclear holocaust; the apocalypse; casting into the lake of fire, and the end of time won’t even be noticed.

@blogenfreude: I agree with Hose, Revelations is low hanging fruit. With the Old Testament, you can pretty much close your eyes and start wherever the book falls open. Zombies help explain that question I always asked as a kid: Mommy, what’s an “abomination”?

Sports threadjack/
Just a reminder – we are down to two contenders in the Stinque Bracket – You are either with Lefty or against her – in which case you are for MellBell. The women rule the tourney this year, and the current game (halftime UCONN 36 – Mi.St. 38) will only help sort out the estrogen challenged also-rans.

Ladies – where is the trash talk?

Also – @CB and HF -What is the deal with the Chicago Bears playing with a quarterback this year? Is that not a violation of the NFL charter?

Revelation (no s, fellow anal-retentive theologians) may be the sugar-coated cereal of our project, but that doesn’t mean it’s lacking in nutritional value. But I leave that for the Genius of the Zombie Collective to decide.

Personally, I agree that many of the dustier Old Testament books would make wonderful mini-projects. And as CB has noted elsewhere, Paul needs to be taken down wherever he turns up.

We embark upon a world-historical project here. Perhaps I should subtitle it 325 and All That.

Okay, for the perusal of my Stinque-y compadres: I have finished Zombie Ruth, Book 1! Shudder and behold.

@Hose Manikin: I would never trashtalk Mellbell, as she is the sweetest thing you ever could meet. Plus I picked her hometown team to go all the way, so she can’t trashtalk me.Sorry, this is what happens when you have estrogen mixed in with sports.

Speaking of shitty teams, do you think the SF Giants are going to win more games than they lose this year? Mr. SFL is an A’s fan, and is horrified that Giambi is back. We are making plans to go to the ’89 earthquake festival game b/n the A’s and the Giants in July (since naturally neither team will be in the 2009 world series).

@BRB: Do we know how to party on a Saturday night, or what?!

@SanFranLefty: Ruth is my favorite. Also, I get to make Oprah jokes.

@SanFranLefty:
Well, that’s good, considering she (UNC) is currently kicking your (NOVA) ass. BTW, if UNC does win it all, you don’t finish second. I do. Not that I care, but – just sayin…

@Hose Manikin: I would give a shit if we had money on it. I’m in five other pools that involve money and am much more emotionally involved. This one is just about having bragging rights on the main Stinque page.