Not Of This Earth

Did you know that there are still people out there who are upset that Barack Obama was born in Africa, the fruit of an act of sexual congress between his Kenyan father and the chick from species? Seems it’s unconstitutional for a man to be president whose alien mother fed on the bio-electrical impulses given off by men who die while in the physical act of love. (The Founding Fathers thought of everything!)

Well the editors of the World Net Daily care! Not only that, they’re currently running three, count ’em three world exclusive stories on Obama’s extra-terrestrial parentage. Also, they’ve got a world exclusive refrigerator magnet for sale so you can let your Monday Night Football buddies know that you care, too! (Just be sure to take it down if you ever do decide to invite Tyrone, from Accounts Payable.) 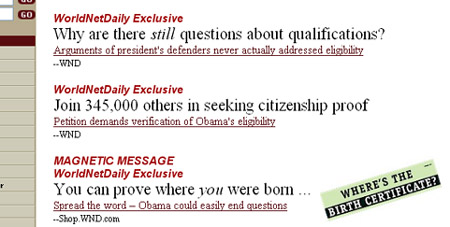 Would someone, anyone, who knows the people who run World Net Daily, text them and let them know that the reason they’ve currently got four world exclusives(!!!) on this story is because even supermarket tabloids that print full-cover, front page pictures of an emaciated Patrick Swayzee weeping in his hospital bed have more shame than to run this nonsense? Someone? Anyone?

Maybe if we’re lucky the staff at WND will all decide to go Galt.

Serolf Divad runs the largest hedge-fund on Galactica, with assetts exceeding 100 trillion cubits. I know a guy who might be able to get you in on it, if you’re interested.

What’s the return per cubit invested?
Why are my comments showing up with the Click to Edit line still there in perpetuity? {I added this second question at 11:15 am on Sunday. What gives?)

@BRB: As opposed to an asset?
Either way, I don’t have them.

Same as an asset, but in the future.