Stinque
Home Latest Comments Log in
If it smells, we’re on it.
Stinque
Mastodon: @stinque@mas.to
News You Can Abuse

Good morning Stinquers! Serolf here. Been up for a while already, surfing the web for headlines so you don’t have to. Providing a service so you don’t have to waste hours trolling cyberspace. I’ve found the best headlines this morning and discarded the rest. And by best, of course, I mean the most awful, cryptic, tasteless and sad.

Let’s begin with the New York Post, which this morning informs us: “‘O TO EUROS’ BE MES AMIS AGAIN.” Yes, in the mind of some editor at the New York Post, that random grouping letters  bi-sected by colon conveys information. But to everyone else, I wager, it’s like a word scramble where all the letters are in the right place and it still makes fuck all sense. Oh, “mes amis” is French? Oh, the word “euros” does not refer to the currency? Er, whatever. Maybe it’s in code… Rupert Murdoch’s secret wingnut code. They send you the decoder ring with your subscription, I’ll bet. 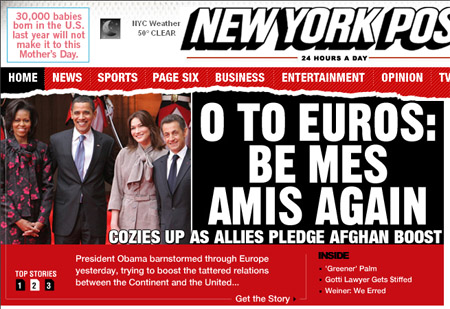 The Huffington Post, meanwhile, regales us with tales of Barack Obama’s frustrated onanistic endeavors. For God’s sake, people… it’s Saturday morning. And it’s not like there’s anything we can do to help, anyway. 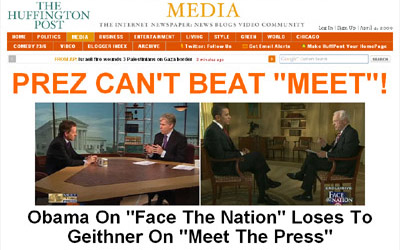 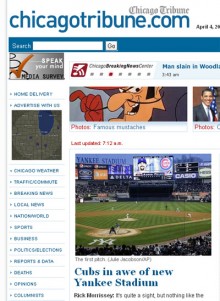 The last one’s gonna make you want to just crawl back into bed and not emerge ’till Monday morning: “O’Reilly and Beck Take on Fascism.” There’s something unbearably creepy about this headline that’s difficult to put into words. Imagine Margaret Thatcher and Ronald Reagan having sex. How did you feel just then? Well that’s the way this headline makes me feel. The nice thing about Saturday morning is that you can just crawl back into bed. So go ahead, my friend, catch a few more Z’s. In three short hours you can pour yourself a drink and no one will be like: “isn’t it a little early to be drinking already?” And with Beck and O’Reilly taking on fascism today you’re going to want a stiff one. 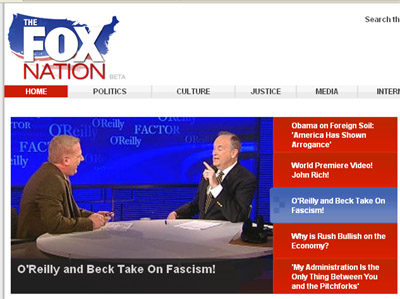 Serolf Divad
9:05 am • Saturday • April 4, 2009
comment »
Choose Your Delusion
April Jam! Feeding on the Blood of the Living
46 Comments
ManchuCandidate

Why would O want to beat his “meet”? I sure wouldn’t if I were married to MO.

a) Do they know what it means?
b) Who used the falafel/loofa?

The New York Post actually serves a useful purpose – when I see it laying in front of various apartment doors in my building, I know to avoid those people like the plague.

At least it was French and not some sort of racist ebonics/Jar-Jar Binks type voice. Which quite frankly I thought it was until I had about 30 seconds and another sip of strong tea to stare at it.

Oh, and David, you have given me a mental image that is so wrong on so many levels. It may be a heroin day.

O’Reilley and Beck are waaaaayyy too incompetent to be effective fascists. Now, Falangism maybe….

@homofascist: It took me several sips of my coffee with Bailey’s to figure out that was the letter O and not a zero. That editor should be shot at sunrise.

@flippin eck: “O” is Oscar Robertson. Obama should have so good a career.

That’s no headline. That there’s a txt msg

@lynnlightfoot: Exactly. Maybe they’re trying to appeal to the kidz.

Oh God! I finally convinced WordPress to give me a new password and then actually allow me to use it! Phew, that was a process.

And speaking of news that will turn your stomach, I trust you all saw that one of our favorite law professors found love on the internet and decided to share the details with the NYT, right?

The tale of Meade and Ms. Althouse is a cross between the studiedness of a Victorian epistolary courtship —a modern-day Robert Browning googling his dear Elizabeth Barrett — and the wackiness of 21st-century life online. The Althouse commentariat would log into the virtual local pub of the blog, gossiping and fantasizing about their queen’s offline love life, and even egging the couple on. When the announcement finally came, the commentariat cheered, bursting with hometown pride that a humble, anonymous son of the Internet could win the hand of the blogger.

Whoop! There goes lunch too!

@BRB: OMG. To quote my avatar, “Tonstant Weader fwowed up.” Who wrote that tripe? What editor thought it was appropriate to publish in the NYT, even in the Women’s “Style” section?? I cringe for everyone involved.

I think Fox Nation made a typo–what they meant to say is O’Reilly and Beck Take Over Fascism.

When the announcement finally came, the commentariat cheered, bursting with hometown pride that a humble, anonymous son of the Internet could win the hand of the blogger.

Eh… this is Ann Althouse we’re talking about, right? They make it sound like something to celebrate.

@BRB: God I hate the NYTimes. I have to go to the city on Monday. I’ll throw a brick at the building when I get out of Port Authority.

T/J Just came across this beautiful quote from Victor Hugo I thought others might enjoy: Religion is nothing but the shadow cast by the universe upon human intelligence.

@Serolf Divad: The expression on her face in the accompanying picture is also simply insufferable. “Yes, I am the Queen…..and the Princess. Drink me in, you jealous feminists!” Or, as the overwrought prose of the article puts it, “The blogger is boss, a salon host with wit and whip.”

@Serolf Divad: I wonder how many boxes of wine they’ll need for the wedding.

@Serolf Divad: And just to catch you up, I had some fun with Ms. Althouse here.

@homofascist: Does that mean this is the wrong moment for a Special Announcement regarding me and Libertarian Tool?

I doubt if any blogger will disagree with my assertion that, coming from Bill Clinton, the “O” of an onion ring is a vagina symbol.

Oh, my… oh, my. This is one of those statements that defies all attempt at parody.

@nojo: Flying to Des Moines, are we?

@nojo: How does Mrs. Tool feel about this news?

@SanFranLefty: I think she started growing suspicious when we shared our mutual envy of Andrea Mitchell.

@nojo: @SanFranLefty: Dammit Nojo! We agreed to wait on the announcement until after we picked out the crystal pattern. I am now going to insist on Ron Paul officiating the ceremony.

@libertarian tool: You kids let us know where you’re registered.

@Mistress Cynica: If it’s at Amazon, I’ll be very suspicious.

I made this discovery using my secret decoder ring. Anything revealed?

@EffeteHipster: OBMAA? So it’s a tampon (OB) and the sound a sick kitteh makes (Maa)?

@libertarian tool & @nojo: You really need to register at someplace like Hemp Palace. Libertarian and liberal can agree on the need for the decriminalization of pot and hemp. Can I officiate if Ron Paul’s busy?

@EffeteHipster: I hear the sound of the boldface letters being shuffled and the anagram OBAMA arising from the Scrabble heap. Omigod, the Post is secretly an admirer of the Prez!

@EffeteHipster: @lynnlightfoot:
Of course. Your typical leftist false flag pseudo-paranoia. You think I don’t see through this little charade? You are dealing with a Paultard here. I see the patterns within the patterns. And the deception was so clumsy so… amateurish. Am I to really believe that EH simply “forgot” to boldface the “E” in Euros before the scrabble shuffle? Really? Really? Give me a break. I’m not an idiot you know.

If we put the “E” back in the mix we get to the real transmission from the Post. “AMOEBA” – “An animal composed of only one cell that has no fixed shape. It is the best known of the single-celled animals, or protozoa. The term amoeba is sometimes used to refer to something with an indefinite, changeable shape.”

The real meaning here is intuitively obvious to even the most casual observer. I don’t think I need to say anything more.

But wouldn’t the word AMOEBA imply some sort of belief in evolution?

/not sure why my inner German took over the signature line

@SanFranLefty: Libertarian and liberal can agree on the need for the decriminalization of pot and hemp.

And Hemp Newspapers are the obvious solution.

“A hardheaded woman is a thorn in the side of a man.”

Wanda Jackson was inducted into the Rock and Roll Hall of Fame tonight. Her story and performance reduced me to tears. I’m just a rockabilly fool at heart. Some guys called Metallica also got in. Celebrated with a bottle of ozzie shiraz. Chilling with the new u2 (excellent road music btw) and a Dos Equis now in my pad. The Wanda Jackson documentary I saw a while back that made me a fan should not be hard to find.

On another topic (but still having something to do with shape-shifting, however tangentially), do we correctly deduce from your having the same avatar as Hose Manikin that we may expect, down the road, more mitotic descendants from this same line, differing only in name, protective coloration, and the tropism of their pseudopodia? In other words, are you a shape-shifter, too?

@libertarian tool: After writing the previous comment, I got out a magnifying glass and can now see that the animal shapes contained within the yin/yang symbols in the avatars used by you and Hose Manikin are not the same. My bad, I guess, or is that difference merely an extension or a further refinement of your shape-shifting propensity?

As of yesterday or maybe even as of Friday, whenever I submit a comment, the Click to Edit line appears, sans timer, and remains (along with the capability of altering the submission), seemingly in perpetuity. The same thing is happening with the comments of Effete Hipster (with whom I share a computer, along with much else). We use a Mac with OS X, version 10.4.11, maybe we have missed out on an update of some kind?

@lynnlightfoot: I really can’t help you with this. Hose Manikin and I are not on speaking terms.

@lynnlightfoot: We use a Mac with OS X, version 10.4.11, maybe we have missed out on an update of some kind?

The commenting software was updated, and the update somehow screwed with the functionality of, well, editing comments. The only solution was to turn off the timer.

@libertarian tool: See, libertarians can’t even get along with their other personalities.