Stinque
Home Latest Comments Log in
If it smells, we’re on it.
Stinque
Mastodon: @stinque@mas.to
Ask a Pornographer

The University of Maryland has scrapped the scheduled screening of a motion picture “talkie” because the film in question is a controversial one, being more geared to adults than kids. The film Pirates II: Stagnetti’s Revenge is geared to adults in the sense that it is a parody of the Walt Disney Series Pirates of the Caribbean that toys with genre convention and challenges audiences “horizon of expectations” (or what German literary theorist Hans Robert Jauss termed Erwartungshorizont) by being pornographic and all. And this has proved just too much for the Maryland State Legislature:

Senate President Thomas V. Mike Miller indicated he would vote for the budget amendment, giving substantial backing to the threat of denying the university tens of millions of dollars in state funding.
On the Senate floor, Sen. Andrew P. Harris, a Republican from Baltimore and Harford counties, suggested amending the state’s annual budget to deny any funding to a higher education institution that allows a public screening of a film marketed as a XXX-rated adult film, unless it is part of an official academic course. [A particularly awesome, official academic course, to be sure –ed.] 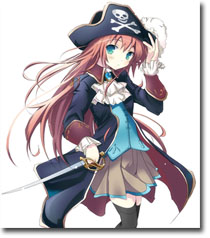 Meanwhile, the student committee that planned on showing the film had also invited Planned Parenthood to give a talk before the screening, thus confirming all of conservatives’ worst suspicions about Planned Parenthood. The subject of the talk (which was expected to draw .01% to .02% of students who had acquired tickets to see the film) included topics ranging from cinematic portrayals of women to issues  of safe sex (i.e. is it  safe to have three extremely promiscuous bi-sexual men inside you at the same time, or is one more than enough).

Student defenders of free speech are predictably outraged by the Maryland Legislature’s interference in university affairs, but are at the same time worried that perhaps the student committe  has overreached this time and might prompt State Legislators to mandate “porn filters” be added to the University of Maryland’s Internet firewall. Said freshman Heywood Jablome: “Were that to happen the only students able to watch pornography from their dorm room PCs would be the sorts of nerds who understand shit like anonymous proxies and relays and the like. The rest of us would have to go back to having actual sex with  flesh and blood co-eds. And who wants a return to those days?”

Also, isn’t it safer to contextualize pornography, which gushes from the intertubes 24/7 like some great pink river, within the confines of a classroom, where, as Serolf points out, at least you can discuss things like safety and representation? You know that these kids nowadays are seeing much more than we ever did, and probably most of it is a lot more, uh, specialized….

I do not understand censorship in general, but when Universities do it it makes my head spin.

@Tommmcatt the Wet Sprocket:
True. It’s not like kids these days (sigh I’m old) are virgins.

I went to UM – best place to have sex was practice rooms with at least a standard grand piano. Those Yamaha conservatory grands are seriously sturdy.

Watch Jeremy Clarkson shit his pants in a Koenigsegg.