Last week we debunked the myth that if every man in the PRC Armed Forces jumped at the same time, it would tilt the Earth’s axis of rotation (fact: since the Earth already rotates on as  axis that is tiled 23.5° from center, the act would actually straighten the planet’s rotation). In this week’s installment of our long running series “China Myths,” Stinque takes a look at the widely held belief that were China to dump all its U.S. Treasury bills onto the market at once, it would eviscerate the dollar and devastate the U.S. economy. This long held belief is, in fact, a myth. Allow Princeton economist and Nobel Laureate Paul Krugman to explain:

In the early years of this decade, China began running large trade surpluses and also began attracting substantial inflows of foreign capital. If China had had a floating exchange rate — like, say, Canada — this would have led to a rise in the value of its currency, which, in turn, would have slowed the growth of China’s exports.

But China chose instead to keep the value of the yuan in terms of the dollar more or less fixed. To do this, it had to buy up dollars as they came flooding in. As the years went by, those trade surpluses just kept growing — and so did China’s hoard of foreign assets.

The net result was that China is, essentially, holding our balls in a  monetary vice grip and can castrate us any time it wants by dumping its dollar holding, right? Well, not so fast. As it turns out:

…there’s nothing to keep China from diversifying its reserves away from the dollar…nothing, that is, except for the fact that China now owns so many dollars that it can’t sell them off without driving the dollar down and triggering the very capital loss its leaders fear.

Ha, ha, ha! Turns out that if the Chinese were to dump all their dollar holding it would actually devastate both our economies! Too bad.  So sad.

How do you saw “Pwned” in Chinese? 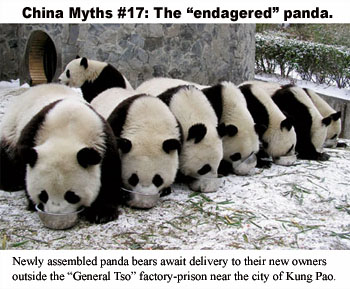 Next week “China Myths” will explore the widely held belief that Ethylene Glycol is bad for you.

Its the monetary equivalent of the tale of the Scorpion and the Frog. At this point I can’t decide who is the frog and who is the scorpion.

@ManchuCandidate: “So, wait, who’s the Mexican in this scenario?”

@mellbell:
I think that would be us. We lose either way.

I think “2 big 2 fail” should replace E. Pluribus Unum on our currency. It’s only fitting.

Pandas!!! The day is looking up already. Loved the post too, BTW. Good to have you aboard, Serolf.

@Mistress Cynica: Add – I am loving Michelle O’s purple dress – Carla Bruni is looking drab in that gray thing with the 80s tie at the neck.

@SanFranLefty: Wait, I’m taking it back as I liked the 3/4 sleeve thing she had on, not the weird coat thing.

@flippin eck: From the NYT article:

The American Civic Association describes itself as helping immigrants and refugees with counseling, resettlement, citizenship, family reunification and translators.

It also intervenes with emergencies, including fighting, hunger and homelessness, according to information from the association’s Web site.

Yes, we better kill the workers at a group that fights homelessness and hunger.

I guess this isn’t really the time for my surreal TJ about Bristol Palin’s baby daddy going on Tyra Banks.

Oh, and Serolf? Looking forward to many posts like this one, dude.

flippin eck / SanFranLefty: Hold up. You remember the chair of the Arkansas Dems that got shot at his HQ back in August, just before the convention? If memory serves that tragedy (strangely enough) had nothing to do with his politics. (Please correct if I am wrong.)

It could be that this is precisely what we think it is, or it could be a guy who worked there, or it could be a run-of-the-mill gun crime with a guy who is stupid enough to think that he can run off to Canada — free to pursue a life of religious fulfillment — in exchange for taking, and then freeing, hostages.

@chicago bureau: True, it could have nothing to do with the politics. But 13 dead, per MSNBC.

@Mistress Cynica: I’ve petted koalas, wallabees and different sorts of kangaroos. I wonder what the panda feels like.

I’ve heard that Pandas are stoned all the time from eating Eucalyptus. It’s one of those things I am going to believe even if it isn’t true.

I wish I were a panda.

@SanFranLefty: It’s only a couple of hours away from here; north and west.

@Tommmcatt the Wet Sprocket: You’ll always be a panda to us, darling.

Well, some kind of bear at any rate….

@Tommmcatt the Wet Sprocket: I thought it was the koalas that ate eucalyptus and were always stoned. Don’t pandas eat bamboo?
@FlyingChainSaw: Mr. SFL had to chase off an overly friendly kangaroo that was trying to get in the trunk of our car when we were camping on Kangaroo Island off the coast of South Australia. Not so cute when it’s a foot away from you and taller than you. Also got to stand next to a sleeping koala at the Sydney Zoo.

Not in my little world, baby. Stoned pandas, yay!

Hehe. One doesn’t think of Communist China as having much of a sense of humor, does one?

@SanFranLefty: Correct on the bear food. And koalas sure act like they’re stoned, don’t they?

@FlyingChainSaw: Darling, you’re mellowing. Usually you’d be inviting me to a panda BBQ. I would love to pet all of the above.
@SanFranLefty: @Tommmcatt the Wet Sprocket: I know koalas get so stoned on eucalyptus that they fall out of trees, that being a leading cause of death for the little darlings, but I support pandas being stoned as well. Hell, everybody must get stoned!

@Mistress Cynica: There’s a eucalyptus tree across the street from my house. Wonder if I can smoke the leaves.

@SanFranLefty: Re Fashion (Which I am just now getting time to check–work can be sooo inconvenient): Absolutely loved Michelle’s dress and Carla’s, and both coats were disasters, Carla’s even more so. Was that Ultrasuede?

“Ha, ha, ha! Turns out that if the Chinese were to dump all their dollar holding it would actually devastate both our economies! Too bad. So sad.”– sd

Even funnier – It is actually our stated policy to let the bureaucrats in Beijing decide whether to pull the trigger on this murder-suicide pact! Based exactly on this rationalization. Fucking hilarious. But it is only a murder suicide – if you believe that the only high growth economy with the fastest growing consumer class on the planet is incapable of growing without selling us their shit. More accurately, whether it is true or not, the only thing that is relevant is whether the Chinese government believes it.

The situation reminds me of the final Russian roulette scene from the Deer Hunter. Bernanke is Robert Deniro. Geithner is Christopher Walken. China is the master of ceremonies loading the gun. Lights! Action…