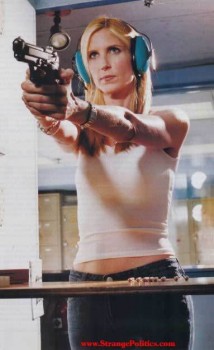 Not quite sure where she’s headed with that, but you can head over to Human Events and read … oh wait, you can’t.  I was wrong – the column has not been rewritten.

Car and Driver originally posted an April 1 story online — since removed — with the headline, “Obama Orders Chevrolet and Dodge Out Of NASCAR,” and the text, “With their racing budgets deemed ‘unnecessary expenditures,’ GM and Chrysler are ordered to cease racing operations at the end of the season.” However, Car and Driver later clarified that the story was an April Fools’ Day joke, then removed the story from its website.

One phone call – one fucking phone call would have alerted her.  But it’s not the first time she’s been so sloppy.

Media Matters for America has examined a copy of author and syndicated columnist Ann Coulter’s new book, Guilty: Liberal “Victims” and Their Assault on America, which Media Matters obtained in advance of the book’s release, and presents a sampling of the book’s numerous falsehoods, including misrepresentations of the sources she cites. These falsehoods come on a wide-ranging list of subjects including her defense of the claims made against Sen. John Kerry (D-MA) by the Swift Boat Veterans for Truth during the 2004 presidential campaign; her assertion that “Fox News has never been caught promoting a fraud”; her claim that President-elect Barack Obama was referring to Gov. Sarah Palin when he said “you know, you can put lipstick on a pig; it’s still a pig”; and attacks she makes against New York Times columnist Frank Rich.

We’ll see if this gets picked up by the MSM.

Well slap my bum and call me Ada!

You expect her to, like, look for verifiable, like, facts? What are you, some kind of islamomarxist?

Facts are such a librul thing.

Good thing she didn’t see the fake CNN page that Car Talk/Tom and Ray Magliozzi sent around, where they were named to head up the GM recovery. Their plan was to sell cars to Cuba, to replace all the relics that are still on the road there. Ray Magliozzi’s resemblance to Fidel was touted as giving the plan a big advantage.

Ya know, even if it were true that Obama told GM and Chrysler to stop with the Nascar stuff, the quoted sentence, which appears to be an attempt to make some incoherent point about muslim prayers in schools and jihad, is so devoid of any logic its essentially a non-sequitor. I mean, what? Ann, just what the fuck are you talking about?

I could at least understand the false logic of her saying “if he can kill nascar, he can force our kids to pray muslim prayers,” but she appears to be saying the opposite, that he should order a stop to the mandatory muslim prayers because they are an unnecessary expense. I think.

@WaltTrombone: 17 tequilas later, we had decided the fate of the revolution. Havana would go back to the mob, and fidel and I would open a chain of Kentucky Fried Chicken stands. I feel better now.

I hate to break it to you guys but this is how the wingnuts are going to react to this story: “Well, maybe it was an April fools joke. But what does is say about how awful Obama is that the story seemed perfectly plausible?”

Don’t believe me? That’s exactly how the wingnuts reacted when the Ashley Todd (some scary black Obama supporter carved a backwards “B” into my face) story turned out to be false:

It doesn’t matter whether Ashley was genuinely attacked for her political beliefs. What counts is that the story seems entirely plausible, and that’s scary. It’s entirely believable that an Obama supporter would viciously maim a McCain volunteer because we expect that behavior from people who delight in smearing the minor children of politicians.

That photo is Photoshopped — yes??

@Prommie: It doesn’t have to make sense. It only had to repeat some part of the lie that Obama is an islamomarxist plant who is going to kill all white American men and hand their women over to his Al Qaeda collaborators to breed jihadi to take over America and establish the N American Caliphate that Obama will hand over to Osama. “Dominos Pizza has a coupon in the newspaper this week! I bet that Obongo’s friends in Al Qaeda just love eating pizza while they are making plans to destroy America!”

@Dodgerblue: Photoshopped? In what sense? To make her giant yet weak hands look evern bigger and more claw-like? Or to remove the air of deep discomfort and self-consciousness she sports?

@Dodgerblue: It sure looks that way to me. The lighting on her face looks wrong, and as any gun nut will quickly point out, she’s not wearing eye protection. This could mean photo tweakery, or it could mean publicity photo, where some stylist complained that the goggles were too distracting.

TJ: Please, help me with a name, my dilemna is explained at the secret facebook clubhouse.

@Dodgerblue: From what I understand, she actually shoots.
@Serolf Divad: I hadn’t thought of that particular instance, but I remembered the move. It’s all they’ve got.

@Serolf Divad:
I seem to remember cracks about comparing then little girl Chelsey to a dog.

It’s a lot like this story from ex L&O type, Angie Harmon.

@IanJ: Yeah, it looks to me that somebody stuck her face on the body of a woman.

@Dodgerblue: That’s how it’s photoshopped. That and they made the Adam’s apple less prominent.

@Serolf Divad: Completely forgot about the B-brand story. My, last year was busy!

But it crossed my mind the other day that folks on the whole seem to have forgot the President is Near. The wingnuts might have come out guns a-blazin’, but I haven’t noticed any Distressing Subtext since the campaign.

And no, the birth certificate doesn’t count.

SanFranLefty: Dood! You post a call to Stinquey Arms a minute after my post. If I had more time, I woulda put up a Drudge Siren.

In reviewing things very quickly (more time tonight whilst I listen to the Blues / Red Wings game — Hawks can clinch the playoffs tonight!!), I’m not seeing how (or remember how) Dollar Bill Cellini is hooked into this particular mess. All I know if that if they can take him down, but not Blago, it will be a job well done.

Ugh. Ugh, ugh, ugh. Ann’s mistake is something I’d expect to see on LiveJournal. But, instead, like her buddy Rush, she’s allowed to say the most ridiculous things and make the most ridiculous falsehoods because the left is too scared to annihilate them for the screaming teenage girl Chicken Littles they are.

Can she show me which schools – plural – FORCE STUDENTS TO PLAN JIHADS? If someone on the left said that schools were FORCING KIDS TO BLOW UP ABORTION CLINICS – or whatever Jesus freaks consider their jihad – the right would be like, WE WISH. If anyone talked about Christianity with the vehemence and bile with which the right talk about Islam, they’d be hung.

Also, her statement that “some kids coming out of New York high schools are so stupid they don’t even know how to get out of jury duty,” if said by someone on the left, would have been torn apart as being unAmerican, unpatriotic, the beginnings of kangaroo courts, the absolute dissolution of due process, and nine other things I’m too angry to think of right now.