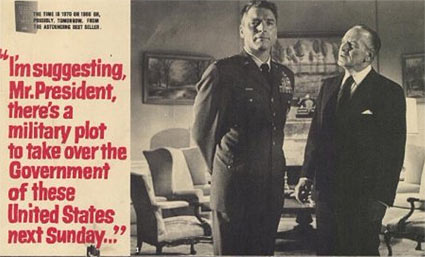 What End Does Cheney Have Planned for President Obama?

For the GOP, domestic politics is just an extension of a global covert operations enterprise funded by anyone who has a play in mind that can make some money for the psychofascist goons that have been running the show since Ike let go of the wheel.  In the psychofascist history of the world Obama is just another unfriendly, disposable head of  state who will be be removed and tossed into the morgue of covert ops like Allende, like Lumumba, like Mossadegh. That’s why writer Seymour Hersh’s recent revelation that Überführer has a fifth column of fascist loyalists reporting to him from defense ministries is so terrifying.

At an interview at the University of Minnesota this week, Hersh revealed that GOP Überführer and Crime Boss Dick Cheney had a legion of fifth columnists operating in the US defense agencies reporting back to him on a regular basis, but for some insane reason wrote off their ability to influence policy as marginal at best.  “He’s got people in a lot of agencies that still tell him what’s going on. Particularly in defense, obviously. Also in the NSA, there’s still people that talk to him. He still knows what’s going on. Can he still control policy up to a point? Probably up to a point, a minor point. But he’s still there. He’s still a presence,” Hersh said, completely oblivious to the context he laid out in his interview that he refused to resolve with this insane claim.

The topic of the interview? Cheney’s personal assassination squads working out of a black ops group called the Joint Special Operations Command (JSOC).

Two things that were different during the Bush-Cheney era, says Hersh, were that 1) the list of those to be killed was submitted for “final clearance” to Cheney’s office (no other vice president has ever had such a role), and 2) in the days after 9/11, these operations were “funded off the books” so that even the highest-clearance most secret congressional bodies didn’t have any opportunity for oversight through the appropriations process. When some of these members of Congress complained to Cheney that things were being done behind their backs, he replied, according to Hersh: “I’m not going to give you clearance. If you don’t like it, sue me.”

Hersh, you stupid fucking numbnut! You think Cheney is finished giving these people targeting orders!? You think they’re done shooting just because a Democratic administration won the last presidential election!? Cheney’s Obama team has long been formed and is waiting for its moment. Hersh, quit sucking your own dick on college campuses and put the names of those team members in the fucking newspaper and do your fucking job!

Are we absolutely sure that Hersh hasn’t just gotten a hold of some bad acid?

More importantly, though, when was Spiro Agnew in a movie with Burt Lancaster?

I need to study pictures of Sy Hersh so I can spot him. If he’s on an airplane I’m boarding, I’ll take a later flight.

@Jamie Sommers: Sy has been right about pretty much everything since he started his career.

It is equally plausible. Not that I doubt the story is real….

@blogenfreude: Yes he has been right almost all of the time. I think that he was “wrong” about going to war in Iran only in that his story got enough traction to kibbosh the plans.

I read that there was a movie project that was fairly well along, in the early part of the oughts, 2002, or so, about the wall street coup plot that tried to enlist Smedly Butler to lead troops to overthrow Roosevelt in 32 or 33. It was killed. But its not the first time.

They did kill Kennedy, after all, and after that, another Kennedy.

The CIA’s precursor was a private club controlled by the people from Brown, Bush and Harriman (have I got that right?) and it has been a rogue operation, a shadow government acting on behalf of the corporate oligarchs, since its institution.

They let Cheney into the club, and he has just been the most reckless and arrogant of them, he is a sociopath, so he thinks he can be open about it. The old school, white shoe Ivy guys, they were classy about it, subtle, close-mouthed. Like Poppy Bush, who would think that doddering upper class twit had family connections so deep into the defense and intelligence communities that he had the power to make his retarded son president, that was a bigger coup than killing Kennedy.

And noone ever talks about the CIA co-option of the heavy hitters of the mainstream press, its only when it gets as obvious as the actions of whatsername, the Times reporter who was completely CIA, the “aspens are turning” woman, and even when you pointed out her obvious involvement in the conspiracy to sell the war crimes, people call you a whackjob. Judith Miller, was that her name?

@Promnight:
No one talks about that. Or Smedley Butler for that matter. Strange, you would think people might remember a TWO, not one, but TWO time Medal Of Honor Winner (usually when you get one MOH or Congressional Medal of Honor, it is normally because you’re dead–they didn’t call it the Coffin with Metal Handles for nothing.)

Especially considering that Bush Sr’s pappy was heavily involved in the 33 coup attempt.

@ManchuCandidate: I see you understand. Have you read “Harlots Ghost?” In my house, it is as unremarkable as saying the sky is blue, to mention that there is a defense-intelligence-old money financier conspiracy that has controlled the US since the cold war, killed the kennedies, installed two simpleton puppets, completely controlled puppets, Reagan and Bush, and installed one of their own legacy members, Poppy. They control the world, they make it safe for their money interests, they decide where there shall be wars and where there shall be peace, above all they strive to control all the natural resources of the world, not just oil, the others are quieter, noone notices the rebel activities in the bauxite mining areas.

They squeeze the money from the little people to the maximum degree they can, while still leaving them enough to consumer their shit.

They are not smart, they have no long view, arrogant entitlement is, they think, enough to qualify one to know what is right, and thats that. They think only of todays profits, and burn up and squander resources with a confidence born of ignorance that when thats gone they will find more.

They are not just robbing us, they are robbing the life force and soul of the planet, literally, they are a scourge to all living things.

@Promnight: Prommy you should tell everyone to buy that book through the Stinque-y linque to Amazon so that Nojo is no longer running this site as a pro bono project-slash-tax write off.

@Promnight:
No, but it’s going on my Books To Buy/Read List.

Its by Norman Mailer, its amazing. SFL, I would, I do, urge all to buy it through the stinqey amazon link, and while at it, buy all your books that way, thank you for reminding me, SFL, I am going to remember that myself.

Are you, um, of like mind? That its all a farce? That they do control it all, with some limits necessitated by the limits of public credulessness?

@SanFranLefty: I will buy some shoes tomorrow morning, er, later today (damn insomnia), soon as I can figure out the right size in the brand.

@SanFranLefty: Isn’t it stunning? Artistry of the highest order and you cannot look away from the screen. The trash chute scene? OMG. I was interested by quite a few of the comments at imdb that claimed that the movie made communist Romania look too glam. Imagine.