Laughter is the Best Socialized Medicine 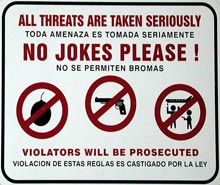 The god joke was kinda funny, but the rest? Meh. I think WND’s articles are funnier.

Conservative humor, like military intelligence and jumbo shrimp, is a problematic concept.

Anybody awake? My jetlagged girlfriend woke me at 6:30 am b/c she could not sleep. And now I CAN’T GET BACK TO SLEEP!

@blogenfreude:
Sorry to hear that. I’m just working (what I’m supposed to be paid to do) because it was a quiet time. Right now I can hear my housemate’s fucking obnoxious alarm and I really want to hurt him for ruining a quiet morning.

@ManchuCandidate: Sounds like that alarm clock needs an intervention. With a ball peen hammer.

@blogenfreude:
I’ve come very very close to smashing it. Sometimes when he leaves for a trip, it goes off and I end up ripping it out of the wall socket.

Um, as you can probably tell, I’m not working THAT hard.

@blogenfreude: By 6:30 a lot of us have already been at work for some time. There’s a depression on. No time to sleep. Hustle to buy ordnance for the coming Cannibal Anarchy.

I am going to go stimulate the economy by buying breakfast. Later I might inject more capital by purchasing a lamp.
@FlyingChainSaw: I am up that early during the week – on Sat. I sleep in unless I have to work. nyah.

@blogenfreude: This is exactly why the economy tanked. People sleeping after 5 am when they should be working, or doing one-handed push-ups in the parking lot at work while singing the company song. Remember while you are on your economy stimulating shopping spree that you can’t kill a cannibal neonazi with a lamp.

“I’ll keep my guns, my freedom and my money. You can keep the Change.” Saw that one on a RW gun blog I quit on my way out last night.

Speaking of work, I was outlining a memo and removing lead deposits from a revolver chambers while all the rest of you were philosophizing and carrying on about Sport last night.

/off to the office, oil change and range. Laters.

What’s the difference between the Weekly World News and World Net Daily?

One’s a journalistic joke and the other recently went out of business.

Oh fellow Stinquers. Your HF is SO hungover right now. Went with flippin’ to a world music thing last night with really good mojitos, and I committed a serious party foul and got way too sloppy. Ugh. Flippin’ is a stand up babe for taking care of my drunk ass. More sleep now.

I’ve found that a good drunk is cathartic. Not often, but once in a while it helps clear the skull. Last time I sailed for the Intoxicated Sea, it was on the good ship Canadian Club.

I don’t know if any or all these remedies cured him, but I’m happy to report HF is up and around again. He called me a while ago…so I could tell him where his car was.

@redmanlaw: Actually, I’m thinking “My turn to get sloppy drunk next! Yay!”

@homofascist: How many free throws for a serious party foul?

@homofascist: You need to desensitize yourself. Try this: locate a very large pair of cymbals – like 36″ Zildjian crash cymbals. Take them into a very small room and crash them for an hour in quarter notes at MM 168.

@Serolf Divad: You need to post that on the WND site. I’ve read their thread, and yours would be the only mildly amusing comment on it.

@SanFranLefty: I seriously had no idea where my car was.

@flippin eck: It is totally your turn. And we will find you a guy who doesn’t have a girlfriend.

Now Mr. HF is out with friends having fun and I am stuck at his place feeling crappy. When will I ever learn?