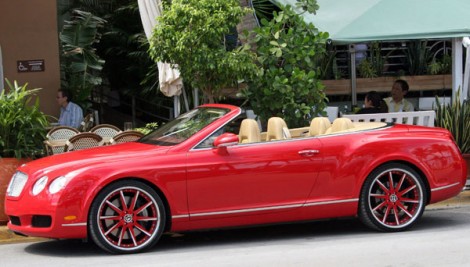 This is a Bentley GTC.  It has a six liter, twelve cylinder engine.  It gets twelve miles per gallon. It costs around $197,500, and it will go from zero to sixty miles per hour in less time than it takes you to read this sentence. It’s one impressive Volkswagen.

And this one is really really ugly.

I have been concerned about Bentley abuse for some time.  This is Exhibit A: 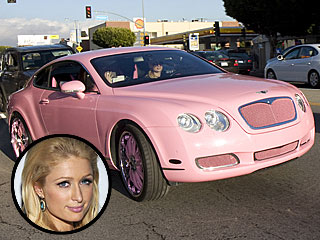 And don’t forget – she’s getting the dashboard encrusted with diamonds.  For the record, Paris’s car is a Bentley GT – the hardtop version – but is built on the same platform as the GTC.

As for our first victim, you just know that a celebrity was involved.  Click here to find out the name of the miscreant.

The Bentley GTC as conceived looks like a proper Bentley.  I like the simple wheels and the subdued interior and exterior colors. 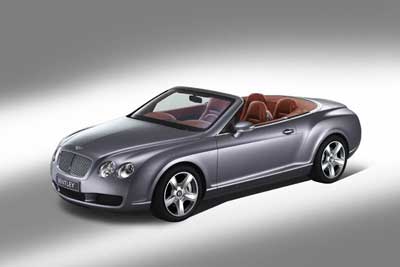 The sad thing about the garish red car is that it’s probably a factory customization.  When you get into the GTC’s price range you can ask the factory to do almost anything when you order the car. But why would you when the “standard” car is so nice?

Still, the red car is, at least to me, unforgivably hideous. And disagree with me if you will, but I think the four door Continental Flying Spur (also built on the same platform) is better looking than either two-door – in fact I think it’s one of the best looking cars in the world. 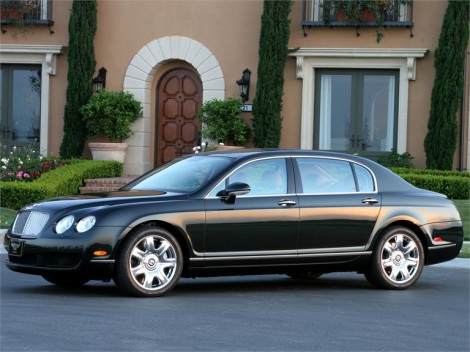 Down With CROCS! [dlisted]

Sigh. The last time I saw a car that pink was my sister’s Barbi ‘Vette.

BTW, what is the color? Herpes Pink?

@ManchuCandidate: If you care to watch Jeremy Clarkson flog a Bentley designed before VW came along go here. Talk about a slab of Olde England.

IMHO, none of the great once-British cars–Jag, Rolls, Bentley–are as beautiful now as they were between the wars, or even in the early ’60s.

@Mistress Cynica: They might not be as beautiful now, but they certainly don’t deserve the treatment celebrities give them. These defacings must be stopped.

Bentley’s don’t really do it for me. They’re like the Chrysler 300, but for people with more money.

Actually there’s something off-putting about the interior of these ultra-luxury vehicles, to me. They feel like they’ve jumped the shark from luxurious to outright garsih. There’s a Maserati dealership not too far from me, and when I went to look at a Quattroporte not too long ago (just to look, I could never afford such a car) I was a bit repelled by the veritable rainforest of inlaid wood. It was a bit too much. For my money, the nicest car interior is an Acura TSX with NAV, tan leather and wood accents. Makes me want to become a traveling salesman just to spend all day in it. If only there were better iPod integration, I’d consider a used, manual 2004-2007 TSX as my next car. As it is, though, I’ve got two toddlers to haul around, so the cloth interior of my ’08 Mitsubishi Lancer will suit me just fine for the next 5 years or so.

@blogenfreude: The atrocities of the arrivistes and nouveau riche are not to be believed. You should have heard my grandmother on the subject.

@Serolf Divad: To me, the Chrysler 300 looks like a cartoon gangster car. OTOH, a buddy of mine works for Chrysler (for now), and he tells me they sell a ton of ’em.

@nojo: And you can just imagine what happens when the passenger airbag goes off.

@blogenfreude:
it gives you a blow job?

You see a buncha these Bentleys around LA. And Quattroportes. Here in Santa Monica, it’s all Priii and Subaru wagons. To show that we’re not extraterrestrials, Mrs. DB drives a Prius and me a Subie Outback.

Fastest VW is the Bugatti Veyron, no?

@blogenfreude:
And this is one is really really ugly
I did not need the headache this caused.
As far as Bentley is concerned: There hasn’t been a Bentley worth owning since the old S-Series cars of the late-50s-early 60s (because the Rolls Royce autos they were based on were also the finest of their type).

@Ewalda: Hey, the Lawrence Welk show is on KTEH right now! Get down with some polka, man!

I actually walked by a Bentley dealership today. I know next to nothing about cars but I told Mr. SFL that I thought they reminded me of PT Cruisers.

Yet despite my egalitarian, socialist, green, low impact, humble worldview, I too am somehow personally affronted, and I know that I would be a better owner of such a bauble, I would be tasteful about it, dammit, and hey, I even know that if they really cared about cars, they would know that the Veyron is the ultimate car, the meanest, most badass swiss watch ever made.

@Benedick: “Give me fuel, give me fire”

Turn on, I see red
Adrenaline crash and crack my head
Nitro junkie, paint me dead
And I see red

@nojo: Bravo, Nojo! (When Paris grows tired of her diamond-encrusted horror, what will become of it and its diamonds? How are said diamonds affixed to the dashboard? Super Glue? Jeweler’s settings?)

Paris in her Bentley = a blot on the landscape