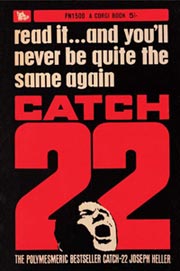 But just for practice, we thought we’d take a nibble at Friday afternoon’s announcement that the term “enemy combatant” has been dropped from the official lexicon. Hurrah, we’re supposed to think, one of the Bush abuses has been tossed aside:

Rather than relying on the president’s authority as commander-in-chief, the department explained, the new standard “draws on the international laws of war to inform the statutory authority conferred by Congress.”

Thus TPM, whose judgment we usually trust, celebrates the announcement as a “historic gesture”. But note that “statutory authority” — it’s the September 2001 “Authorization for the Use of Military Force” (AUMF), which was ostensibly directed towards the perpetrators of 9/11. That’s the legislation that politicized a crime, that created a “war” when an FBI manhunt would have been more effective. If you want to date the birth of the Bush Tyranny, that’s as good a place as any.

The DOJ doesn’t question the law in its Friday announcement. In fact, the court memo included with the announcement proposes a “definitional framework” that states the President’s authority under AUMF:

The President has the authority to detain persons that the President determines planned, authorized, committed, or aided the terrorist attacks that occurred on September 11, 2001, and persons who harbored those responsible for those attacks. The President also has the authority to detain persons who were part of, or substantially supported, Taliban or al-Qaida forces or associated forces that are engaged in hostilities against the United States or its coalition partners, including any person who has committed a belligerent act, or has directly supported hostilities, in aid of such enemy armed forces.

So the Obama Administration still claims the authority to round up the usual suspects, only now we’ll call them, let’s say, Xe. But what — if anything — mitigates that authority?

You would think that’s where the “international laws of war” come into play, and the 12-page court memo is indeed sprinkled with references to U.N. resolutions and the Geneva Conventions. But every example cited is used to support detentions — because we declared “war” in the first place. And the President still has sole authority to make the call. Just like before.

The only substantive news in Friday’s announcement amounts to a status report: “The Government will apprise the Court of relevant developments resulting from this ongoing [policy] process.” Move along, nothing to see here. Yet.

Oh, and all this only applies to Guantanamo. Not, say, Bagram.

So, Darth Cheney was right then?

But we’re not calling them “enemy combatants” anymore! That makes all the difference.

A “kinder, gentler” infinite detention. Change we can believe in!

Obamabots: You were the chosen one! It was said that you would destroy the Cheney, not join them. You were to bring balance to the force, not leave it in darkness.

Now that’s my kind of tweet: a Latin quotation from Gibbon, complete with elision. I love this place.

If the administration is using the September 2001 “Authorization for the Use of Military Force” passed by Congress as the excuse to continue the detention policy then I think it’s time for Congress to do its job and put an end to the enabling legislation.

There’s nobody with the huge ego required to become President of the US who is going to hand back any power that Congress has created out of thin air and given to the executive branch. Congress, which the Constitution designed to actually run this country, needs to legislate this imaginary presidential power out of existence right now. Speaker Pelosi, Senator Reid, where are you hiding?

@Dave H: Pelosi and Reid? The spineless wonders? If they couldn’t stand up to a president of the opposition party with the lowest approval ratings in history, I’d say the chances of them taking power back from a popular president of their own party is less than zero. I am beyond disgusted with them.
One longs for the days of Tip O’Neill. Honestly, I don’t think either Reid or Pelosi has the desire for personal power–or responsibility–that standing up to the executive branch would require. They’re perfectly happy to stand back and let someone else run the show. One shudders to think what would have happened had they been in leadership positions when Nixon was in power.

what did we call this before joseph heller?

@Mistress Cynica: And in California, for Big Daddy Unruh. Stuff got done and he didn’t suck up to power.

Speaking of GM circling the drain, here’s a note from Reuters:

U.S. President Barack Obama’s task force on the auto industry has hired a bankruptcy lawyer to advise it on its options. The task force hired Matthew Feldman, a partner in the business reorganization and restructuring department at New York law firm Willkie Farr & Gallagher LLP, the law firm said in a news release Friday.

If, as it strongly implies, that we are going to start treating the detainees as POWs, this is far from a merely semantic move. The fundamental hypocracy of the Bush admin was to want to claim its war, but treat the enemy fighters as criminals, but with no due process. If its a war, the enemy fighters are POWs. POWs are treated in a manner completely different from the way Bush treated them. I can’t see how this change does not lead to the granting of POW status.

@Dodgerblue: GM is a powerhouse, saddled with some structual inefficiencies that it would cost it way to much to improve, without a bankruptcy. The bankruptcy will allow it to shed unproductive dealerships without state franchise law penalties, and to start from scratch with labor. Its not circling the drain, its doing the only thing it can to achieve radical reorganization.

The ‘conomy is improving, you watch.

@Promnight: You probably saw that Ford says it has cut a deal with the UAW to bring its wages to near the levels the “transplants” are paying, e.g. the Indiana factory that made my Subaru. UAW is now going to shop that deal to GM. Do you think GM can live with it, or do they need more?

@Promnight: You may be right, but they’re not claiming that, at least in Friday’s announcement. Everything in the court filing — part of the Guantanamo habeas lawsuits — is directed towards preserving the President’s authority and discretion. The fundamental question at issue is not the treatment of “detainees,” but our right to detain them in the first place.

So all I’m saying is that there’s less here than meets the eye. Celebrations of civil liberties and the rule of law may still be warranted, but not yet. I’m inclined to extend Barry the benefit of the doubt, but that remains provisional until we see definitive action.

GM deserves to die for making shitty cars that nobody wants to buy for years, not to mention their relentless lobbying against any kind of public transportation infrastructure, in cahoots with the oil industry while fomenting absurd fantasies about biofuels and hydrogen and the boondoggle that is the Volt riding in like the four horsemen to save the car culture.

@nojo: I’m inclined to extend Barry the benefit of the doubt…

Nojo, you are a loving giving optimistic hippie. Everything this administration has done regarding the true horrors of the Cheney administration points to not passively but actively defending the heinous abuses of power enabled by the likes of John Yoo. I really don’t believe the Unicorn is Evil incarnate, but really, WTF?