Exit, Pursued by the Border Patrol 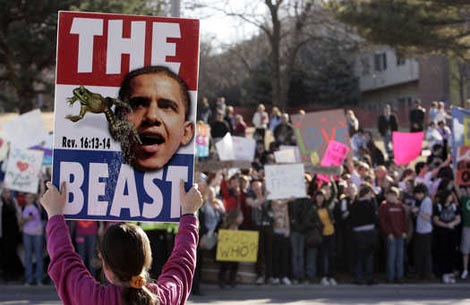 Fred Phelps and his Westboro Baptist Clown Troupe attempted to take their traveling salivation show to England this week, where they planned to protest performances of a play about Matthew Shepard. But authorities were not amused by the rude mechanicals, putting them on the next flight back from Heathrow.

“Both these individuals have engaged in unacceptable behavior by inciting hatred against a number of communities,” said a U.K. Border Agency mouthpiece. “The government has made it clear it opposes extremism in all its forms.”

Instead, the bumptious buskers had to make do with a street performance Thursday outside a high school in Prairie Village, Kansas. Their new show, “With a Frog in My Throat,” drew an audience of hundreds.

I hope the Brits made them stand in one of those extra-long lines at Heathrow.

@Dodgerblue: And amoungst a group of brown-skinned homosexuals going on holiday in the Caribbean.

It’s amazing to me that a buddy of some dead Marine hasn’t lost it and beaten Phelps within an inch of his worthless life.

@blogenfreude: They’re certifiable. They advertise the funerals they are going to – which are often in places with adjoining woods. A handful of marksmen could turn that crowd into red mist inside of 15 seconds and be gone without a trace inside of a minute.

@AARPrick: Backed by a collection of footie hooligans going toTenerife for vacay.

You know, I thought I had it bad when I was seated in front of this spoiled brat who kicked the back of my seat all the way from Toronto. I’m thinking the guy sitting next to Phelps for eight hours was probably fantasizing about inventive and spectacular ways to kill himself.

@chicago bureau: Poor bastard was probably seriously considering storming the cockpit door in hopes a federal marshal on board would shoot him.
@Dodgerblue: I think the appropriate punishment would have been 3 or 4 days stuck at Heathrow.

@chicago bureau:
Sorry, that was me… Just kidding.

Worst airline flight ever was on a now defunct discount airline.

Stuck in the middle between a large 300lb woman with no divider between us and a young woman with a crying kid on a 5 hour flight from Vancouver.

I was sweating like crazy on one side and deaf from the crying kid on the other.

That was when I realized that things might have been better if I paid the extra $50 to fly Air Canada.

@ManchuCandidate: Then you are stuck between a sexually frustrated lumberjack and a woman tanning beaver pelts. I can’t imagine that would be much better. Although I hear they do serve that maple soda.

speaking of airlines…my furchildren are flying el al.
they have a whole division dedicated to pets…they REALLY want jews coming “home” so bad they have incredible services for jewish animals.
they get scooped up by someone in miami and get treated like royalty.
they have attendants full time in the cargo hold to watch the animals!
and armed!

@homofascist:
that made me laugh for 5 minutes.
my thanks HF

@Dodgerblue: Like we learned to do when being bombed on by Nahzees. The ability to form queues is a prerequisite for a civilized community.

And then they go to the land of lime juice. You may have got that I’m not so big on lime juice. But there is a reason that Hitch published his impenetrable tome on Kissinger in Limeyland: the libel laws. In the nation of Shakeshite and Thatcher they don’t let you get out in front of the Crazy Waggon® and spout shit re whatever: they will shut you down like they shut down the working class. They got Speakers’ Corner. Go there and spout.

@baked: I’m thrilled to hear this about Jews and Pets. I thought it was a local occurrence. But now I see it’s genetic. Even so, we do not need another dog: not even a Pug. Even though Abraham loved him some Pugs the OH ain’t gettin one. Not even though his first dog, and greatest love, was Pug. Hope everyone gets there safe. Kisses.

@Benedick: Re the lawsuit thing, this is why I stopped giving to the ACLU after the Skokie march. I’m not a free speech absolutist. Phelps and the Nazis need a boot up their ass.