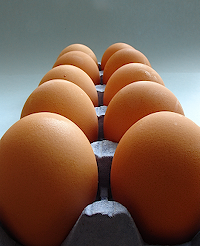 Who cares that the economy is fucked and that we’re fighting two wars – what’s important is protecting Blastocyst-Americans:

North Dakota appears intent on triggering another round of litigation in the hopes of overturning Roe v. Wade. North Dakota’s House of Representatives has voted 51-41 to declare that a fertilized egg has all the rights of any person. The vote would make abortion murder.

I think the cold up there numbs their brains.

Minot Republican Dan Ruby previously sponsored other bills banning abortion but they all failed. Strangely , Ruby argues that the bill is compatible with Roe v. Wade: “This is the exact language that’s required by Roe v. Wade. It stipulated that before a challenge can be made, we have to identify when life begins, and that’s what this does.” That is a pretty convenient reading of the case and its progeny of cases. It misses the repeated holdings that states cannot deny a woman the right to choose in such cases.

With Democrats in control, some activists may view this Supreme Court as the best they are going to get for some time. Before any further changes occur, they may want to try one more time to further narrow or outright overturn Roe.

I said it before and I’ll say it again – fence off Utah, put all the fundies in there, and let them stone all the sinners they want.

@rptrcub:
I guess you’re right. Man One it is.

“fertilized egg has all the rights of any person”
So, one could, theoretically, claim a child as soon as they’re pregnant, reap the tax credit, “miscarry”, and do the same thing next year. I smell a refund!

Although it is less “Prince Valiant” aka bowl shaped now.

@Prommie: How long before those kids wind up on TMZ or something, once they turn 16?

Remember this guy? What the fuck is wrong with the Dakotas?

From the MacClones (aka Macleans aka Time Magazine of Canada City)

“Seriously, this is the longest answer in the world. The last time the PM was this expansive in replying to questions from reporters was outside Rideau Hall, when he was snug and dry under an overhanging roof, and we were stuck outside, where it was hailing. Hail!”

@Marcel Parcells: And to think, I’ve been sitting on a cash cow all this time.

@mellbell: …literally. *silence* What? I thought this place was all about inappropriateness!

Speaking of inappropriate, I had a lengthy argument with my mom about abortion over the phone last week (not my idea!). How painful is it to talk to the women who birthed you about zygotes, when a fetus is viable, and whether it’s appropriate to charge a women with murder who just took Plan B?

I don’t even go into that, because I believe the fetus, from the moment of conception, is a human being. I just believe that the life of the mother, and her right to control her life, takes precedence over that of the child until such time as the baby would be viable outside of the mother’s body.

When a good friend of mine had an unplanned pregnancy, I asked her to consider keeping it, hugged her and took her to the doctor when she decided to terminate it, and helped her get over it.

I believe that abortion is the termination of a life, but I also believe that as a man, regulating it is none of my damn business, and that I need to support women in their sovereignty over their own body.

Which is to say, theological nuances aside: There is not, and will never be, a consensus answer to the question. We’re left with the guidelines of Roe v. Wade, which for practical use is as close as we’re gonna get.

@nojo: I agree, though I’m sure someone attacked Barry for punting to God.

@mellbell: Everybody on the Right attacked Barry for the punt. Psychogeezer gave a firm, immediate “at conception” as his answer, at which point the auditorium was lifted on a wave of hosannas.

But Barry’s was the wise response, if not the politically astute one.

@Mr. Tommmcatt Poon: An ex of mine, who volunteered as a clinic escort, believed as you do, and found he could stop protesters in their tracks by conceding the point. “Yes, it is taking a like, but there are numerous cases where society decides one life is more valuable than another.” They had no comeback.

I’m sure the ND legislature is on top of amending all rights of property ownership and inheritance in their state to include fertilized eggs.

If you are not willing to get women of child-bearing age into a football stadium, step to midfield and say: “I know what is best for you. Nothing about your personal situation bothers or interests me in the least. I’ve made the decision. You can’t have an abortion, ever. Be gone.” — then you can’t even think about legislating.

Writ large: suppose you did that in Chicago, in which there are (rough guess) 1,000,000 women of child-bearing age. Suppose that it takes two hours to clear the first crowd and bring in the next. At four sessions a day, you’d have to reserve Soldier Field for three full days, and half of a fourth. For the whole of U.S. America? Five solid weeks of anti-abortion instruction meetings. That’s what we’re talking about here.

@ManchuCandidate: with that logic in mind, I’m going to quote Bill Hicks:

“I have wiped entire civilizations off of my chest with a gray gym sock. That is special. Entire nations have flaked and crusted in the hair around my navel. That is special. And I want you to think about that, you two-egg-carrying beings out there with that holier-than-thou, we-have-the-gift-of-life attitude. I have tossed universes, in my underpants, while napping. That is special.”

An acorn is not an oak tree. Its alive, but its a living acorn, not a living oak tree. Fuck fetuses. We should saute them and eat them. Like soft-shell crab, no need to bone them.