Stinque
Home Latest Comments Log in
If it smells, we’re on it.
Stinque
This is America.
A Special Place In Hell 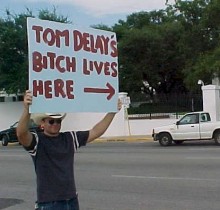 Ha ha.  Several Republican Governors are considering turning down the state funding from the stimulus package.   These American heroes don’t want to save their economies because it conflicts with their Conservative/Toddler ideology.  Instead, they are hoping to destroy their already piss poor economies, thus further embittering the voters in these poor, backwards, red-necked wonderlands.  Of course, the creation of more bitters only further helps the Republican Party, because if there’s anything we learned from the last election, it’s that the poor white bitter vote will win the election for the Republicans every time (Whoops Pennsylvania!)

The Republican Party, having left behind its idyllic frat-party days of the early 2000s, is now stuck in the fear of commitment mentality of a 24-year-old shiny-shirted douchebag, cruising for drunk chicks at the local Applebee’s.  Sad.

This may turn into a separation of powers issue, since state legislators can override a Governor’s refusal of the stimulus package.  So, you’re only truly fucked if you live in a state with both a cretinous Republican governor and the neanderthal legislature to match.  On the good news side, there are still Republican Governors out there, like Charlie Crist and Alabama’s Bob Riley, that are going to be more pragmatic about things, and take the money to help out their state.  They realize they will still be free to criticize the Democrats for plenty of other things later.

Gotta love the ideologues. Never let reality intrude into their fantasy world lest it destroy it.

Fuck the Red States. They need to be punished. If they don’t want the cash, send it to us so we can fix our bridges. Or fix the Mall in DC, or clean up Baltimore or Newark. Fuck Bobby Jindal and the rest of ’em.

I heard this story on the radio this morning, as I was waking up. I kind of wondered if I was still dreaming. It has that kind of logic.

I blame Kinky Friedman and Scott McClellen’s mom for this fucktard’s continued presence greasing up the governor’s mansion.

@blogenfreude: Let them secede from the Union also. We can stop subsidizing their “lifestyle.”

The funny thing is the red staters are still going to help pay for the stimulus package, so if their lame governors decide to pass up the benefits I’ll say, “Thanks a lot.”

So, you’re only truly fucked if you live in a state with both a cretinous Republican governor and the neanderthal legislature to match.

Seems Barry is quite the diplomat even in the Capital of Canada City.

@Mistress Cynica:
Maybe this time you guys won’t let them back in.