Every Jerk You Take 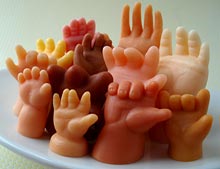 We’ve been amused for years by the tax-avoidance schemes of the wealthy, which largely consist of creative ways to tax the poor. A straightforward graduated income tax would work wonders, but of course that would have the same effect as consolidating credit-card debt: scaring the shit out of you.

So instead we scatter taxes all over the place, pretending it doesn’t all come from the same wallets anyway, especially the thinnest.

And with state budgets bleeding red in the billions, state lawmakers are discovering a new untapped revenue stream, just around the curve from those wallets.

Politicians in California, Washington state, and New York have proposed variations on the theme, from a general tax on “digitally delivered entertainment services” (the “iPod tax”), to a stiff 25 percent markup on products and services “primarily oriented to an interest in sex”.

Which would include nearly every consumer product in America, near as we can reckon, but we’ll leave that to the regulators.

We do, but it requires age-verification.

nojo
7:00 am • Tuesday • February 17, 2009
comment »
Choose Your Delusion
Jesunazis On PR Offensive to Popularize Theocratic Dystopianism and Fascism From the Department of Bad Taste
17 Comments
rptrcub

I’d much rather think about taxing drunken businessmen who’ve stumbled from the airport than I would ordinary folks who just need relief from the stresses of living in Southeast Fucktardistan. I think it should only be levied for out-of-state businessmen and state legislators who bloviate about family values until they get to evil, liberal Atlanta and go motorboat some titties or hook up on the M4M section of Craigslist.

And I’ve said it over and over – I am all in favor of billing two-time Bush voters for the mess they caused. Anyone could have predicted this outcome based on Bush’s biography.

@RomeGirl:
Seriously? There is a lot going under those robes that I don’t want to know about.

If only we could tax stupidity. It would solve all our problems.

@Benedick:
FIXED. why i adore you.

Oregon is considering raising the tax on beer from less than 1 cent to 15 cents (it hasn’t been raised since the ’70s).

@baked: You complain about this, from Isreal? I mean, such as. Also.

@Prommie: They should have a tax on payess (long sideburn things) in Israel so the ultra-orthodox could carry their weight, for once.

@Prommie:
i am still a usamerican, such as.
israel does not pretend there is a separation of synogogue and state.

@Dodgerblue:
great idea. they creep me out, the hassidem.
they are israel’s equivalent to the fundies.

@Mistress Cynica: saw that on teevee during my visit. Don’t tax what I use to drown my sorrows any further.

Coincidentally, I thought for the longest time that George Harrison sang “and when I die, they’ll tax the panties on my eye” in Taxman.