From the Department of Bad Taste 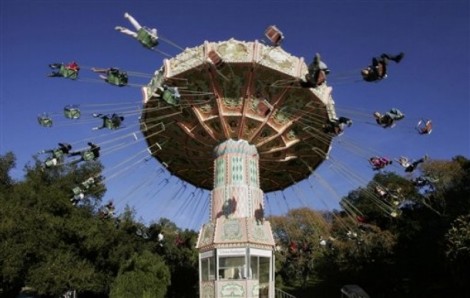 While you’re sitting around worrying about putting food on your family during the Bush Recession/Depression, some people are still out there spending money and adding value:

A museum for the Jackson Five is to be built in Nigeria, American developers have announced, as part of a $3.4bn (£2.4bn) luxury resort including concert halls, golf courses, casinos – and a memorial for Africa’s former slave trade.

The Badagry Historical Resort, located near Badagry’s former slave port, will include a multimillion pound memorial, slave history theme park, five-star hotel and Jackson Five museum. The project is supported in part by Marlon Jackson, one of Michael Jackson‘s brothers.

This is the family that brought you La Toya and Neverland Ranch – how bad could it be?

The development will cater to the country’s growing tourism industry, particularly African-American tourists who wish to trace their Nigerian roots. Visitors will be able to explore the site of the former transatlantic slave trade, honour the hundreds of thousands who died in what were horrific human rights abuses, and then head off for a round of golf or a massage, before gawping at animatronic versions of the siblings who sang ABC and I Want You Back.

It’s been reported that Marlon has a few other projects on the back burner.  They include:

Will there be a cartoonish looking Kunta Kinte as the mascot?

I figured it would have been Tito. I’m ashamed of you, Marlon but I strongly suspected that Michael and LaToya weren’t the only crazy fruit dropping from the Jackson family tree.

Blame it on the boogie…

I dunno. The Marylin Monroe Exhibit at the JFK Library does very well, I’ve heard.

@FlyingChainSaw:
as does the blue dress at the smithsonian.

@baked: Exactly. I heard they’ve got a little Oval Office library set where they do reenactments every day around lunch time.

@FlyingChainSaw: I’d post a link to the appropriate scene from “The Squid and the Whale,” but some people haven’t had lunch yet.

This guy needs to go.

TJ: Hobo-time coming. That is all.

@Prommie:
I guess it would be a good time for buying beans.

@Prommie: Reverse TJ/ A reminder that democracy is firmly in place in Iraq. Although I’m sure that not a few mullahs would have something to say about the brazen display of cheerleader backsides inside of former palaces.

This is something everyone just ought to know. Before he was House, Hugh Laurie was on a sketch comedy show on the BBC, with Stephen Frye, called “A Bit of Frye and Laurie.” And it was hilarious. Well, for some time it was a tradition for the show to end with the giving of the recipe for a cocktail, a new and exotic cocktail.

And I so love just the names of these cocktails, that I must list some here, for your edification and amusement, and to distract me from the collapse of society and second western dark ages now dawning (dark ages dawning? Maybe thats not a good metaphor). So here they are, simply because they are wonderful:

These overfed suburban deer around here are going to be in for a big surprise soon….

@blogenfreude: Looking forward to the Middle Passage and Underground Railroad rides. For the kids there’s the MJ Neverland ride where the sign says “You must be this (4ft line) short to ride me”

In other news, you know that egalitarian, democratic sport of cricket? One less fan in the stands, it seems.

Last fall of wicket: R A Stanford lbw b Romero 23

A Slow Snog with a Distant Relative

@blogenfreude: His photo should be in the dictionary explaining the term: “lying sack of shit.”

@blogenfreude: Kind of like learning that not only has Mr. Magoo done it again, but all along those glasses were fake.

@nabisco: Iraq is now safe for T&A. It’s been worth every penny.

@redmanlaw: Well, it’s not like Burris approved a conjugal visit for a convicted murderer…

And if the bad guys want to make an example of him, great. It’s not like the Demrats are lining up to support him. They’ll get a few days of play on Rush and Fox, while Barry keeps racking up Centrist Points.

I’m thinking Rabbits, actually. We have some room at the side of the townhouse, and hey- food, plus pelts for warmth! Anybody know which breed is the meatiest?

@Tommmcatt Yet Again: If you are lucky enough to find a little rabbit food, you are not going to waste it feeding it to rabbits.

@Tommmcatt Yet Again: The only problem with raising any kind of animal is that they’re very inefficient ways to convert plant energy. If you’re all about surviving and can afford to grow plants, you’ll get a lot more energy by eating them directly than diverting them through another lifeform. Granted, eating the plants directly doesn’t offer the same flavor/texture diversions, but I’d consider raising domesticated animals to be a dispensable luxury depending on how anarchic and cannibalistic the upcoming cannibal anarchy really gets.

Of course, hunting is a completely different question, since the wild animals will consume plants that you either can’t get to, or won’t eat. Then they become much more attractive.

@Benedick: Those pix actually upset me. Did those cheerleaders actually know that the place they were staying at was not only a former Sadaam palace but the place where he gave his last interview before the hanging? Did anyone coach them about the survivor rates of women who prance around in skintights, flashing their backsides? What if this journo’s pix get out to the Street?

I’m steamed. The American guy who was kidnapped in Quetta? We worked together once….and I can’t help the feeling that his 20 second clip is the last we’ll ever see of him until he’s a corpse. And now we have the Buffalo “Jills” ass-end skyward outside the green zone. f*&kers.

View the latest legislative information at the LPITS web site

VERSIONS OF THIS BILL

Whereas, the Tenth Amendment defines the limited scope of federal power as being that specifically granted by the United States Constitution; and

Whereas, the limited scope of authority defined by the Tenth Amendment means that the federal government was created by the states specifically to be an agent of the states; and

Whereas, currently the states are treated as agents of the federal government; and

Whereas, many federal mandates are directly in violation of the Tenth Amendment to the United States Constitution; and

Whereas, the United States Supreme Court has ruled that Congress may not simply commandeer the legislative and regulatory processes of the states. Now, therefore,

Be it resolved by the Senate, the House of Representatives concurring:

Are they seceding again?

Thank the FSM. Seems I just read that SC gets back $1.35 from the Big Gummit for every $1.00 they send in, so the fewer screeching wingtard welfare queens on the dole, the better.

@Tommmcatt Yet Again: Flippin should ignore what follows…

One of my first stories — don’t recall whether it was high school or college — was covering the county fair. Where I took particular interest in the rabbit exhibit.

Cute little bunnies. Every so often, the exhibitors would pluck one from the batch, kill it, make some slices here and there, and strip off the fur. Inside-out. Just like pulling a Playtex glove off your hand.

Whence I understood the meaning of the rabbit’s foot: It’s all that remains.

@Prommie:
@Original Andrew:
Are you guys going to fight to keep them or just let them go?

@nojo:
And not watch “Roger and Me”

Mmm… tough call. My vote is a general amnesty for anyone who wants to flee SC, then a trade war.

It really is a window into the right-wing mindset, and it’s the same all over the country. Here in WA, the eastern, Republican counties have de-taxed and de-funded their county governments to the point that they’re insolvent and 100% dependent on revenue sharing from the western, Democratic counties. Then–of course–they constantly scream about how liberal Seattle is ruining the state, while taking our money. Fuck ’em.

@nojo: That was cruel. You think I can’t say icky things about your furry creatures? Where’s my Richard Gere/hamster link?….oh wait, I’m at work. In the meantime, this will have to suffice.
JNOV’s shit list: Bloggie:: my shit list: you

@IanJ: Actually, since rabbits, cows, goats, sheep, and even llamas are all ruminants, they’re all eating plant life that we can’t eat anyway: grass. Raising them still takes more energy than raising a tomato, but at least they’re not taking food directly out of our mouths. Such as.

@IanJ:
Depends what you feed your animals- some of them can can convert cellulose to protein, which humans can’t do.

@Original Andrew:
That’s some serious kind of dumb. Unfortunately, that type of thinking permeates through the Quebec Separtistes who believe that we anglos are sapping the life blood of Quebec even though each Quebecceur gets about $500 more from the Canada City gubbiment than they give in taxes.

Good points. I was stuck on the idea of feeding all animals corn, which is all anyone ever does any more.

@Original Andrew
Eastern Washington loves Tim Eyman, a man who switched careers from selling novelty items to fraternities to sponsoring anti-tax initiatives. He pretty much made a mockery of the referendum/initiative process. When Eastern Washington started to lose government services because of Eyman’s initiatives some people started whining that they were being punished for backing him. Sometimes you don’t get what you don’t pay for.

@Original Andrew:
True, but I can speak of it as I live in Ontario who only gets 40% of its tax revenue from da Feds.

Also From the Department of Bad Taste:

Obama to double-down on Afghanistan.

I’m sure this is gonna work out well…

@Tommmcatt Yet Again: Which rabbit breed is meatiest? I think the Tofu. Comes in neat slices ready packaged.

@nabisco: I know. Just when you think they couldn’t possibly get more repulsive they do.

Yes, but can you make a tofu coat? Think about it….

@Tommmcatt Yet Again: Like me, you can wrap yourself in smugness. That keeps you pretty toasty.

@Benedick: Smugness and moral superiority are the best insulators of all.

That and a nice rabbit fur coat.

@IanJ: Corn is the most completely industrialized, chemicalized, hybridized, genetically engineered crop on earth. There will be no corn, unless RML’s buddies are still raising the old varieties.

The seed producers patent their modified varieties, and then sue the farmers who would save some ofthe crop and plant the seed for patent infringement, you have to go back to them and buy their patented seed for each crop. They have created a new kind of serfdom for farmers.

There is an ugly dynamic of republican parasitism going on. Republican controlled states reduce their taxes and starve their government, and then go to the federal government for subsidies, and the productive west and northeast wind up supporting their welfare-living-off-of asses, all while they revile us as socialists and hold themselves up as moral self-sufficient capitalists. Ugly, hypocritical, evil parasites, they are.

@Promnight: This is true, mon vieux.