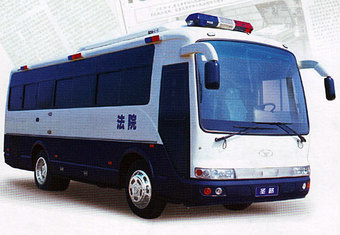 Good thing Dick Cheney didn’t get hold of one of these while he was in power:

Jinguan Auto, a popular Chinese ambulance manufacturer, has developed a rolling execution studio. Convicts are strapped to a power sliding stretcher that extends out of the rear of the bus as it’s allegedly “too brutal” to haul people on board for their final cocktail. The executions are broadcast to local law enforcement authorities to make sure they are conducted up to code.

This trumps the traditional firing line-style executions as small cities do not need to build expensive specialized death structures. We thought you just needed a stained wall, a blindfold and a pack of cigarettes to dole out the harshness, but it seems this is a new, caring China. The lethal injections are supposedly much more humane than having someone kneel and play catch the bullet with their brain.

Not so fast with the China lovin’, though. The Chinese have gotten in trouble in the past for harvesting the organs of their prisoners to sell to Westerners in need of a transplant. Critics claim that the new death bus simply makes it much easier to harvest organs in secret while they’re still usable instead of rushing some bleeding guy into the back room for a hasty slicing. Nobody is allowed to view the bodies of prisoners before they are cremated, so this rumor could prove to be true.

I weep for civilization.

Wow those Chinese are super efficient.

Justice, immoral organ harvesting and Soylent Green all from one vehicle.

The U.S. used to have a rolling execution studio. We called it the “Pinto.”

Wait, wait, wait, they’re harvesting organs from people to whom they’ve just administered a lethal injection? I’m no doctor, but…

Tip: convicts should attempt to board with 45 cents on their person. Exact change rule = WIN.

@mellbell: Yeah, that doesn’t sound right to me either.

And whatever happened to the guillotine? That seemed quick enough to be painless.

So how do they bill the deceased’s family? For the drug hookup? Or do they add the mileage too?

@mellbell: depends on the drug, you don’t want to use cyanide, of course.

@mellbell: They could really cheap it out (depending on the price of diesel), save on drugs, and not poison the goods by running a hose into the bus from the tail pipe.

I’m sure Cheney gets a live feed from the bus to watch while he beats off and chews on baby barbeque.

@redmanlaw: Thats how they were killing Canada geese around here, trucks, using CO from the exhaust.

Now California just needs to reach a deal in the budget bill.

I knew one day I’d parody The Who.

@Prommie: Well, apparently others of their kind took to the skies in retaliation and took down that plane in Nueva Jork. Lesson: don’t fuck with Canadian geese.

Query: Any stinquers using the Blackberry Storm? I can upgrade to one from Verizon for the price of a few cases of beer.

I’m taking no part in this conversation apart from:

@Jamie Sommers: I read an account of guillotining from a professional guillotinist who said that the big drawback is the automatic reflex on the part of the guillotined to shrink back away from the blade so that it doesn’t hit the neck but can land instead on the skull or even the cheek and make all kinds of not necessarily lethal the first time mess. The executioner needs an assistant to grab hold of the condemned’s head and drag it forward so that the blade lands cleanly across the neck. Of course, then there’s the matter of not getting one’s hands in the way. If it’s not one thing it’s another.

(Seriously. So glad not to have to write a story on der Gropenfuhrer and the do-nothings for a few years.)

If Cheney gets sent one of the vehicles, do the manufacturers apologize to him when he kills someone in it?

@Signal to Noise: No, I believe the onus would be on the victim’s family to apologize and, possibly, make reparations to the Dark Lord.

@redmanlaw: The Nazis thought of it first.

@Mistress Cynica: “I’m sorry you had to kill my husband, sir.”

Texas, Florida, and Virginia are each going to want one

@SanFranLefty: Deal reached today. No details out yet.

@Dodgerblue:
It’s the complete lack of details and how it’s being presented as a fait acompli that is making me nervosa.

@Benedick: Thanks. That’s all kinds of informative.

@Benedick: A couple a years back Esquire did an interview with the last living executioner who had worked on a French penal colony. He started out assisting where, as you said, he had to hold the condemned prisoner’s head, which you had to hold it right or you get sprayed with all the blood at the severing of the jugular. He said one time he fucked up and got a blood bath…literally.