Our Chief Weapon is Surprise. Surprise and Fear. 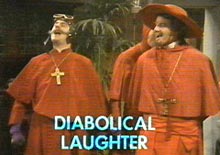 Today’s installment of DisappointmentWatch involves the Office of Inquisition Faith-Based Initiatives, one of Shrub’s notable efforts to trim the Bill of Rights from the top.

You’ll recall that Candidate Barry didn’t have a problem with the office as such — and neither did we, not if it was retrofitted to serve its stated purpose instead of providing fundie pork:

That was Barry last July. And here it is February already! Guess what?

Yup. Amid Thursday’s rechristening of the New! Improved! Office of Jesus and Friends Faith-Based and Neighborhood Partnerships, that pesky detail failed to surface.

Instead, explains rookie White House obfuscator Jennifer Psaki, the Administration reserves the right to review a given grant — no need for a flat ban on discrimination, what with “a mechanism to address difficult legal issues.”

We thought we had one. Perhaps we should send Nic Cage to find it.

But our favorite part of the LA Times story is this bit of unsourced background:

Supporters of the policy argued that a small Christian organization, for example, could not operate according to its ideals if it were forced to hire non-Christians.

Forced? Folks, if you really require doctrinal purity in your social-services program, you’re welcome to leave our tax dollars on the table. Lord knows we could use the extra cash to fund those BofA field trips.

There is a simple thing to do with that plan. If you don’t want heathens to ruin your dogma then DON’T ACCEPT THE MONEY.

Personally I like the taxpayer funded bankers coke and perstorking bacchanals over getting upset because you might have to hire a heathen or ten because at least they’re true to their “moral” code.

Obama would do well to grab the minister of jeebus and throw him out of a helicopter personally on TV to demonstrate how serious he is about eliminating waste in government spending. “Tell jesus I said ‘fuck you’ when you see him, asshole,” he would chirp as the kleptocrat shrieks for his life on his way out of the helicopter door.

@FlyingChainSaw: I was talking with a friend about the TARP program yesterday, and he said the Senate Republicans should be wrapped in a tarp and thrown into the ocean. That’s the kind of change we need.

@Dodgerblue:
Save the tarp–we’ll need it for shelter in the hobo camps.

@Dodgerblue: They could have acted like old fashioned Republicans and done the math. TARP is suspect in a lot of dimensions, not the least of which is its common provenance with Paulson, one of the Wall Street organized crime figures whose bank’s misadventures eventuated its passage. A number of banks wrote down early and went on to manage their exposures on their own. I think the administration would do well to restore confidence in the system by holding up the parts of it CDOs, securitization of high-risk mortgages etc., and stuffing them into a vat of boiling oil. Instead the Gingrich trolls grunted their usual response to everything – eliminate taxes on trillionnaires.

Sick and tired of my tax dollars going to fundies so they can spread their invisible-man-in-the-sky nonsense. Better to stimulate the economy by having our bankers spend it on hookers and blow.

@FlyingChainSaw: I say we stop pretending that the big banks aren’t insolvent and let the FDIC take them over and restructure them. The FDIC is actually pretty good at that. The downside would be that the hookers and blow market would take a hit.

The Hookers and Blow Market is pretty resilient, tho….