Stinque
Home Latest Comments Log in
If it smells, we’re on it.
Stinque
This is America.
Compassionate Conservatives 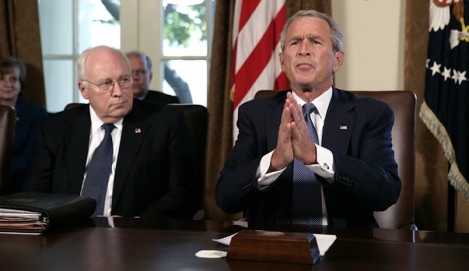 Pardon me for putting up this photo, but we’ve got a few last minute things to attend to before the country magically transforms into a land of milk and honey and ponies.

Politico has a piece up today predicting 10 pardons the Dear Leader might issue.  I think they’re wrong on several fronts, including the number of pardons, but here it is:

As the clock ticks down on his presidency, George W. Bush has shown few signs he plans to indulge in the frenzy of last-minute pardons that marked Bill Clinton’s final hours in the Oval Office.

But Bush could quickly leap back into the spotlight in the next two days if he issues a blanket pardon immunizing CIA and military interrogators, as well as their bosses, from criminal prosecution over harsh treatment of prisoners from the war on terror.

10 Bush Pardons to Watch For [Politico]

I note that WorldNetDaily Poster Boys Ignacio Ramos and Jose Compean got their Golden Tickets today.

Oh, but it’s a commute, not a pardon. Does that count?

Luckily President Bush’s conviction (oooh, I like the sound of those three words together) that his administration has always operated within the spirit of the law makes it pretty unnecessary to issue reams of pardons. There’s no need to pardon legal acts. When you are a true believer in the rightness of your cause it blinds you to a lot of potential loose ends. Especially when God told you what to do.

Question: Is there any reason to think a US presidential pardon would carry any weight at all in the International Criminal Court?

Re: John Yoo and David Addington, there was an interesting discussion on NPR (I think TOTN) last week about whether they — or anyone who relied on their opinion — could even be charged in US courts. Their legal experts agreed that Yoo and Addington were in the clear because it’s not illegal to give an atrociously bad legal opinion, and since they issued it under the auspices of Justice Dept., the federal courts could not prosecute anyone who relied on those opinions. Because I have a job and a life, I had no time to call in and scream the ICC at the Hague or ask whether intentionally issuing an incorrect legal opinion is a crime. Stinque Lawyers?
Also, a moment of silence in respect for your Russian colleague who was killed for trying to obtain justice for a Chechen woman murdered by the Russian military.

@Dave H: Is there any reason to think a US presidential pardon would carry any weight at all in the International Criminal Court?

How many divisions does the ICC have?

This whole pardon-watch thing has a trade deadline flavor to it. Weird.

Anyway, the two Border Patrol agents, according to what I’ve seen, haven’t expressed any kind of remorse. Please advise if I am wrong — even if it is a non-apology (e.g., “I understand my shooting that guy may have offended some people; I’m sorry if anyone was offended”). Kthxbai.

nojo: How many divisions does the ICC have?

NPR just said that, other than the 2 border patrol guards, Bush would issue no further commutations or pardons.

@Promnight: I’m seized with hope. I could barely sleep last night just thinking about it. I’m sure my snark will return soon enough.

Someone here just told me Ms. Biden said on Oprah that Joe had choice between VP and Sec. of State. Hillary’s head explodes in 3, 2, 1….

@SanFranLefty: Everyone seems to be, on CNN crusty old time DC press corp shits are misting up, there is this amazing hopiness spreading across the country. I’m gonna go out and buy something, on credit!

@blogenfreude: Hey Joe is not dumb, VP for the first black president? No-brainer.

DEVELOPING HARD: Lisa Murkowski is in with a Pardon Ted request.

@Ewalda: Say it to the light bulb, mister.

@SanFranLefty: I’ve been gripped with trepidation since the elections, knowing, just knowing that between CheneyCo/RNC, BushCo, neonazies and dominionists there were maybe 7 or 8 teams deployed already to waste Obama at the inauguration. I’ve resisted the temptation to scope the inaugural site on Google Earth to see where the teams will deploy. I can only hope that President O surrounds himself with veteran special forces guys at the inaugural and thereafter who give a shit about what’s at stake.

@FlyingChainSaw: CNN did a time filler about the “counter-snipers” which was matched with a further time filler about Air Force One. The outgoing pilot was a real rah-rah Bush supporter,although he also ferried 41 and Willy. Dude’s retiring to be the corporate pilot for Unused Salvage and Freight in Tempe or something.

But it caused me to be worried about the personal feelings of any of those countersnipers.

Oh, and pardons? Even odds that Chimpy gets confused and pardons John Woo.