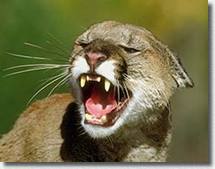 The PUMA’s heads are going to explode:

During the taping of the Oprah Winfrey show today, Dr. Jill Biden said that her husband, the vice president-elect, was given a choice of being either vice president or secretary of State.

This revelation came after Vice President-elect Joe Biden told Oprah that after then-Sen. Obama offered the job of VP he asked for some time to think about it and talk it over with his family.

This is going to be fun. Bill Clinton is going to have to hold his tongue something fierce.

Worried the Unicorn won’t be well-protected?  Look at what will be right behind Cadillac One at all times. Fucking sick.

Steve in Manhattan
4:45 pm • Monday • January 19, 2009
comment »
Choose Your Delusion
Pardon Me I Am Much Mocked
38 Comments
ManchuCandidate

It’s just another bundle of mental TNT thrown into the crazy magazine.

According to the New York News (the OH follows the racing, go figure) Hillz assembled the coven at Emily’s List and said she had to thank 18 mill cracks. Something like that .

Who would ever pass up the Vice Presidency for any other job? Look at the power Lyndon Johnson gave up.

I think that once Hillary climbed on the Obama bandwagon that the PUMAs deserted her and went looking for any woman to run against him in 2012. That’s why I think a lot of the pro-McCain PUMAs like the sad cases we saw here recently are on Team Sarah now. I don’t expect this to make a ripple with them because Hillary let down the faithful.

@Dave H: The PUMA bitterz are bereft since Swampsow sold them out. What I love about Team Sarah is that they can believe their gal still has a chance. Keep hope alive!

Puma’s and Sarah Maniacs are both fictional demographics. Hillz’s shitstain of a campaign manager, whats his name, fatty arbuckle, he was famous for naming little groups, made up “soccer moms” and “Nascar dads.” Its all bullshit, everything he ever did is bullshit. There are just a few morons out there is all, making a disproportinate noise and getting disproportionate attention just because it accords with someone’s fictional narrative.

The crazier cows are going to go apeshit over Obama’s denial. It’s all a part of the conspiracy to bring wimminhood down, doncha know.

@Jamie Sommers: Who is better qualified to be the face of the conspiracy to bring womenhood down than the man who as of tomorrow will be living in a big house with his wife, his two daughters and his mother-in-law? The same man who took time out of a close presidential campaign to rush to the bedside of his dying grandmother. The same man whose own father abandoned the family when he was a child. I guess someone would need the twisted thought processes of George W Bush himself to think Obama is anti-women.

@nojo: I wonder if they’ve seen the email correspondence their gal has been carrying on with the editor of the Anchorage Daily News? It’s awesome to think that she is the one that will keep the crazee alive.

@nojo: Like KO I’m looking for the opportunity to make a campaign contribution to Gov. Palin. With the possible exception of Sen. Joementum she is the GOP presidential candidate I most want to see in 2012.

@nabisco: Oh, yeah. ADN is on their shitlist — they’re constantly referring to its “bias” and rowdy commenters. But any paper that editorializes in favor of Snowzilla is solid in my book.

@Dave H: What I love is how she distracts from all the “qualified” GOP candidates. Self-delusion is so much more amusing when it doesn’t command the world’s largest arsenal.

People just don’t get that we love our Unicorn because he gives us multiple Hopegasms.

On the other hand, this whole Obama vs. us homos thingy has more gratuitous foreshadowing than a Flannery O’Connor story.

@nojo: They are totally biased. They actually respond to her idiotic emails, which is obviously a trick by the MSM to take her out of context.

Dubya has fifteen hours left with no furniture and no staff….I’m beginning to get nervous; I hope they left him some pretzels.

@nabisco: They should have left him with a revolver and a bottle of scotch. A knowing look, a suggestion that he knows, of course, the right thing to do.

Hopegasms, it is true, literally true, people are having hopegasms, now I am becoming very very regretful that I did not do what I wanted, I wanted to basically set myself up with sufficient gear to bivvy on the mall tonight, and wake there tomorrow. Snow? Bah, this ain’t shit, its barely below freezing, you could do it with no shelter in this.

Cheney will be in a wheelchair for the inauguration. He allegedly pulled a muscle in his back moving boxes into his house. What weapon will he actually be smuggling in his wheelchair.

Akshally, for his super-rich sociopathic puppeteers, he’s been the greatest preznit of all time. He helped pull of a once unthinkable $700+ BILLION theft from our treasury–the kind of open looting usually occurring in third-world countries. Not to mention years of massive tax cuts, insane war-profiteering, etc. Naw, he’ll be very well rewarded by the Star Chamber.

@Mistress Cynica: Cheney is in a wheelchair because he strained his back beating the interns running the shredders that even now are destroying his filthy legacy.

Been a long time, stinkers, we have had our wanderings, rebellions, scandals, late night drunken lustings (in the reminiscing of the History of Stinque, how could there possibly be no mention of “My xon, you will dire”), I cannot help but wonder, what will become of us now? I do hope its not Bush angst and hate and furstration and rage that held us together. I love you all, and hey, I am not drunk, the night is young, later I will get sloppy.

Sorry, RML, to bring it up again, but it was, to me, the single best post ever, I love you for it.

@Original Andrew: YOU ARE RIGHT! His puppeteers still control our energy supplies, all major industries, and the mainstream media, we still have plenty to angst about! Yay!

They are the ones who went to far, his puppeteers, they fucked up, they got the people to turn a little bit, just a little bit, but this Hopey thing, it may turn further.

They are the ones who built this bullshit financial “industry,” (as if financing consumption can ever be an industry an ecomony can be based on), and it has blown up in their faces.

Maybe the days of arbitraging living standards will end, thats all thats been happening since Reagan.

Its a fucking new day, with amazing uncharted waters before us.

May Hopey keep this magical hope going long enough to do some good, some structural change, no Clintonesque window-dressing.

@Promnight: I cannot help but wonder, what will become of us now?

You’re not getting Raptured with the rest of us?

Hey, ya’ll know John Lewis? The civil rights leader and congressman from Georgia? I didn’t know him from Adam, but when I was working for Holt’s campaign he came up to do an event for us, and he spoke, and he was a force, an amazingly powerful man. Here is something he said today on NPR:

And you hear people “defending marriage.” Gay marriage is not a threat to heterosexual marriage. It is time for us to put that argument behind us.

This seems to be a taboo subject to acknowledge openly, but its clear that the Republicans are working gay rights as a wedge with black people, yes, blacks, at least black churchgoers, the reliable black voters, are not so open to teh gay thing as most democratic voters.

I was so happy to hear a real, genuine civil rights hero, a man who marched with King, a very important black leader, come out and say this so forcefully, its a very good thing.

@nojo: Please don’t leave me behind.

@Promnight: We’ll need you to cook. Plus, you already dodged that awesome Poseidon thunderstick (my at least second favorite Stinque ramble this summer – thanks for posting it on FB).

@nabisco: You have an invitation to come spend a weekend on the boat at that very place, this summer. No way it will happen again, right?

I am gonna try to get a bunch more photos up later tonight. Stay tuned.

Well I hang here ’cause I’m in l-u-v with yalls’ brilliant, disembodied minds (in a totally non-seshal way, of course).

Plus some of us (me) are trying to become recovering Bitter Nouveau Poors. I’m sure we’ll still have lots of politicky things to chat about.

Besides, our previous home wasn’t called The Optimists’ Party, sabes?

I say we give him 2 weeks then start bitching.

Rachel said the plan tomorrow after the swearing-in is to rebroadcast Sunday’s entire “We Are One” celebration on the jumbo screens lining the Mall. She said the inauguration committee told MSNBC it would include the wonderful invocation by Bishop Robinson.

There are sure a lot of “Arrest Bush” signs in evidence on the Mall tonight. How memorable would it be for Obama to finish taking his oath of office, turn to citizens Bush and Cheney and say “You are under arrest for crimes against humanity” in front of several billion people.

@Dave H: That would give me the biggest Hopegasm of all. I’d also settle for the new President Unicorn instructing the plane that meets Chimpy at Andrews to fly directly to The Hague, Holland.

@Promnight: To answer your question, we ain’t going anywhere. What has held us together is the pleasure of each other’s company, not a shared animus towards 43 or a shared hopegasm for 44.

And while politics is our bread & butter, I was very deliberate not to limit the mission of this here enterprise. It’s simply about whatever inspires people to write, like a classic general-interest magazine. There’s no such thing as off-topic.

More broadly, what’s interesting about the present moment is that the entire blogosphere grew up under Shrub’s shadow, and tomorrow, everyone switches lanes. That’s gonna be fun to watch.

Or the Bermuda Triangle. Whichever.

Mythbusters use a Dillon mini-gun to chop down a tree.

Overlord – please keel the long version of this poast.

@Dave H: I think my head would explode with the happiness of it all.

@redmanlaw: Man, last time I saw that much brass in one place it was on a May Day parade reviewing stand during the Brezhnev regime!

@Ewalda: A late uncle of mine looked like Brezhnev. It was the eyebrows.

@redmanlaw: That only had four links in it. I swear I set the tripwire to six.