Waiting for the Electrical Apprentice, or Someone Like Him 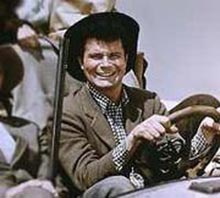 So far, Levi Johnston’s only sin appears to have been failing to wear a rubber sheath over his old feller. But for that brief moment of what we’ll generously presume was bliss, the poor boy has been paying a heavy price, starting with the formal announcement of his cocksmanship by the Republican National Committee.

Levi’s latest consequence for pestorking the Governor’s daughter began Sunday morning, with a column in the local anti-Palin rag insinuating that his electrical apprenticeship — the very apprenticeship applauded by his future Talibunny-in-law only days before — may have been an inside job. And an illegal one at that, seeing how such apprentices typically require a high-school diploma to qualify.

His father — the parent who’s not accused of pushing Hillbilly Heroin — quickly came to Levi’s defense, saying the Governor had nothing to do with it. Dad works at the same company, you see, so of course he helped the Hunky Hockey Jock into the program. Still, Levi quit anyway; the Governor’s putative future son-in-law can’t afford to have even the suggestion of corruption sullying his reputation.

Oh, who are we kidding: It was the missing diploma.

Even then, we weren’t in the mood to mess around with our runner-up for Best Human Prop in a Supporting Role — no turkeys harmed, no foul. But we couldn’t help noticing that Ann Coulter, of all people, had had enough of the Palin family circus, and had chosen this moment to fire a shot across the bow:

“Getting pregnant isn’t like catching the flu. There are volitional acts involved,” Coulter writes.

“Meanwhile, it is single mothers who are damaging their own children’s lives, creating generation after generation of children who are more likely to be addicted to drugs, to commit crime, to be juvenile delinquents, to rape, to get pregnant out of wedlock themselves, to get divorced.”

That’s pretty harsh — we may have called Bristol’s Bastard the Devil’s Spawn, but we meant that in a nice way. Here was Ann Coulter, taking a break from whining about NBC to tell Sarah Palin in no uncertain terms that her daughter is the shame of America.

Without naming names, of course. Ann Coulter is nothing if not discreet.

In any event, we congratulate Levi on his redoubled efforts to get that GED. And when he scores that 300 large for the baby photos, he won’t even have to worry about the apprenticeship.

It appears that the universe is sometimes kind/merciful because there was never a Damien, er, Mann Child inflicted on this world assuming of course, Mann has a vajayjay instead of the much speculated shenis.

Curious use of the word, choice, Mann. Do you think that Talibunny would let Levi use the evil Condom or let Bristol use Satan’s own Birth Control Pills? From all reports, Talibunny is not a single mom, but a good WHITE Christian married lady who let her kids run wild and free to get in trouble (Track in Army to avoid serious jail time and Bristol a Baby Mama.) What do you say about that, Mann?

Obviously Ms. Coulter is just lashing out to cover her own baby-related pain.

Manchu, I think we need not be so harsh to poor, defenseless Ann. Of course she’s female, and she’s naturally entitled to her own opinions.

Ah, shit. I can’t say any of that with a straight face.

@ManchuCandidate: Oh please – after living in NYC since 2001 I know a pre-op tranny when I see one.

The cognitive dissonance is amazing – in her dreamed of Utopia, women will not have any choices so why should we celebrate them for adhering to her ideology.

P.S. And “choose” to get pregnant? Abstinence-only, condoms are bad. Apparently you can get Oxy at the Wasilla pharmacies, but no Trojans.

Speaking of trainwrecks, NEWS… ON THE MARCH! Reid is about ready to fold on the whole Burris deal. So says everybody.

In other news, DiFi attempting to find jar in which to deposit Reid’s onions; due to size issues, DiFi forced into baby food aisle at the Safeway.

Lord — can’t there be a Democratic Senate Caucus uprising or something, apart from the obvious excuse of arthritis and problems with the ol’ tickers?

Birth control pills? Are you referring to Satan’s Chiclets?

That asshole folds faster than a 24-hour laundry.

@Original Andrew: I once heard a member of Congress refer to birth control pills as “baby pesticide.” I now say “Time to take the baby pesticide” to Mr. SFL every morning when I reach for the pill pack.