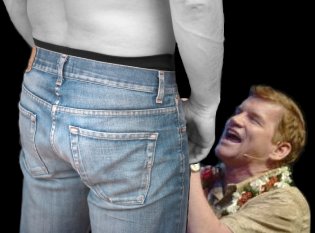 Thank god that his former church released Ted Haggard and his wife from their separation agreement, because it just wouldn’t be the holidays if we couldn’t continue to give thanks for Mr. Gay Face Is Fundamental.  And what better way to celebrate the season than by contemplating “The Trials of Ted Haggard”, the new documentary by our own SFL’s daughter Alexandra.  I for one look forward to watching Pastor Pillow Biter describe how the Baby Jeebus floated down on a pillow cloud to take away his lust for throbbing man meat and reaffirm his love for awkwardly poking around in his wife’s musty old box.  We should all be thankful for this, as there is no better way to lose all of those extra holiday pounds than by violent retching.

Oh, and it’s Saturday – what the hell:

What a great video.

I smell a musical in the making.

That song just made my weekend.

Roy’s playing is good too.

@Signal to Noise: That should TOTALLY be a campfire song.

Srsly, though, I kinda feel sorry for Teddy, not in a bleeding heart way or a “I wanna help you through your troubles, if you know what I mean” way. No, kinda like how someone who made all of his money by conning people (in this case, with a hateful version of an angry sky God and Jeebus) and had a severe fall from grace. Now the man can’t even sell insurance. It’s pitiful, but I am not full of pity (or anything else) for the man. Does that make sense?

I wish he would just embrace it and come to terms with his orientation. There are countess numbers of gay Christians who have come to terms with it and retain their beliefs in Jeebus (though I am not one of them). Come out, come out for Jeeeeebus, ye homos of the cross… (help me with this one, Manchu…)

@rptrcub: He needs to admit what he did was evil, whipping up hate and rage. Even if he had a harem of hundreds of wives and serviced them lovingly 10-60 times a day and didn’t hunger for schlong gobbling, he still has to denounce his career of evil. After that, he can blow his brains out on ESPN pay-per-view.

@FlyingChainSaw: I guess for a moment there the spirit of the season touched me. Inappropriately. Agreed that he should denounce himself and beg forgiveness, but blowing his brains out would be a sin when he could be blowing a line of men (with a bag over his head) from Denver to Kabul as penance for his crimes instead.

Surely there’s a market for a queervangelist, someone who’s a full-on fundie but ignores all of Leviticus instead of parts of it.

@rptrcub: Honey, you know if you want to be touched inappropriately you have a standing invitation to visit my friends in Portland.

@homofascist: I appreciate that, but there is a Potential Mr. Rptrcub who is preoccupying my time down here in Atlanta… so, I feel touched quite enough.

@FlyingChainSaw: He could also denounce the move by the Yes on Prop (H)8ers to invalidate the marriages of 18,000 people who got married during the brief, brief period in which people of Teddy’s ilk (except openly so) could marry. They said at first they wouldn’t do it; now the motherfuckers feel emboldened.

And they think we’re being the ones oppressing them (Mormon “I don’t understand why they hate us”, the wingnut gay fascism argument citing the crazy bitch with the styrofoam cross, et. al.)?

May the noodly appendages of the FSM bless AG Moonbeam as he tries to stop all of this nonsense.

@homofascist:
Nice photoshopping on the graphic.

@SanFranLefty: Thanks, but I cannot take credit.

@rptrcub: Inciting hate, fear and rage is unforgivable. It’s like arson or rape. The perp just has to be wasted and removed from civil society. True, he could offer himself up as a worthless receptacle and blow the whole world but, in the end, the boy has got to go. It’s grotesque to see completely disgraced monsters like Newt Gingrich, Mike Barnicle and Dick Morris, people who’ve surrendered the right to be considered human beings, walking around participating in civil society and taking up the air and time of honorable people. I can’t believe Tom Delay is interviewed on news programs as an expert. It’s incredible that any journalist would ever request anything of Delay except maybe to hold still while he pisses on his shoes.

@FlyingChainSaw: Are you going soft on us? Piss on his shoes?

What say we tie him down, strap an O-ring gag in his mouth, overdose on Ex-Lax and strategically position ourselves above his gaping hole while we wait for the runs?

Scratch that — he’s a Republican, chances too high he’d get off on that scene.

@FlyingChainSaw: @Pedonator: I used to think I had elaborate revenge fantasies, but I see now that I have no imagination whatsoever. Remind me not to piss you guys off.

@Mistress Cynica:Did the terrorists attack your imagination? Put on a diaper, maybe a wetsuit or two, and I’m sure you’ll find inspiration!

@Pedonator: Well, the TV news shows are supposed to be prime time kid friendly programs. Some of these guys deserve that and more. My favorite is beheading them and letting them watch their bodies being ripped apart by hyenas. (I read that a disembodied head can be conscious for up to 15 minutes.) We need to talk to the Obama transition people about prosecution and punishment of guilty GOP goons. They may not given this the kind of intensive thought we have.

@Pedonator: Sorry, I’m not into scat.