Stinque
Home Latest Comments Log in
If it smells, we’re on it.
Stinque
Mastodon: @stinque@mas.to
Shoes for Industry 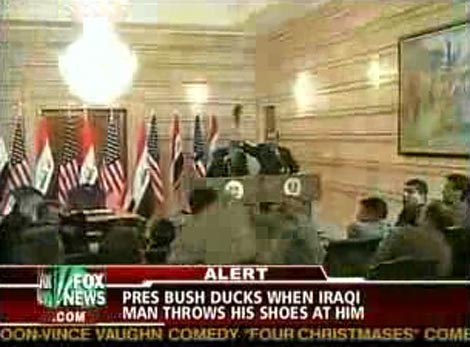 To answer everyone’s question, yes, “the Secret Service put everyone who attended President George W. Bush’s Baghdad news conference through several layers of security Sunday.” There were no guns in the room, just shoes. And a very angry reporter.

Make that a very surprised angry reporter. Journalists weren’t told in advance that Maliki’s Secret Santa would be making a guest appearance.

But never mind the details. McClatchy’s story is accompanied by a Fox News clip of the incident, and the crawl is fascinating. We voted here for Vince Vaughn, although “Teen Vampire Drama” was a close second.

Update: Muntader will get his day in court Wednesday, when a judge decides whether to press charges. Prominent Iraqi lawyer Dheyaa Saadi is stepping in to defend him. “He only freely expressed himself to the occupier,” said Saadi, “and he has such a right according to international law.”

And while Muntader was beaten by Maliki’s guards immediately after the incident, his brother tells network Al-Baghdadia that he later spoke with Muntader by phone. “Thank God, I am in good health,” Muntader told him.

They will now confiscate shoes from everyone before a press conference, leading to some very, very smelly confabs.

This could create more problems than just the smell. Remember what happened to Wolfie when he had to remove his shoes:

I am sooooo sending a pair of shoes to the White House this week.

TJ: Dust off the Winnie-the-Pooh photo — Vilsack’s been named Sec of Ag.