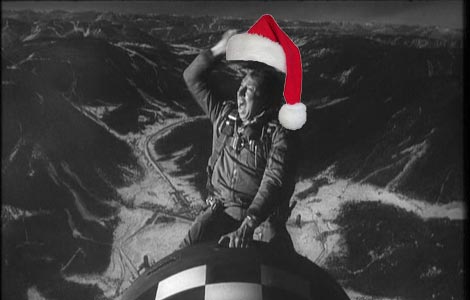 Good news if you hoarded a dozen Elmo LIve’s and can’t flip them for black-market profit before the bill comes due: Relax! You won’t have to pay for them after all.

The bad news? We’ll all perish next week instead in a massive nuclear holocaust.

That’s the holiday forecast from Leland Freeborn of Utah, known by a few dozen locals and now thousand of L.A. Times readers as the Parowan Prophet.

Like all prophets, Freeborn is never wrong. Except when he is. He predicted riots following Obama’s loss in November, based on reports from 2 Peter 2:13 (a jazzy riff on Sodom and Gomorrha). When Obama foiled his prophecy by winning instead, Freeborn countered by moving the riots to next week. Amid the chaos, Putin will rain nukes upon us, which would prevent Obama from taking office, and then fulfill the original prophecy. Check and mate.

What drives Freeborn is “a repeated dream of seeing nuclear flashes to the west while shopping at a Wal-Mart during Christmas season,” reports the Times. Which we’re all but certain has nothing to do with our repeated dream of torching worthless boxes of Elmo Live in the Wal-Mart parking lot.

In Utah, the Parowan Prophet predicts disaster will prevent Obama from taking office [LAT via SanFranLefty]

Speaking of SFL, girlfriend, you need to start a blog (when and if you find the time, natch).

BTW. Whatever happened to Elizabeth Claire Prophet? Remember? A woman I was working with quit after that show (nothing to do with having worked with me) to renounce her worldly possessions and go off to join the cult. ECP had predicted that Doomsday was going to occur on a day, Thursday perhaps, in the not too distant future. TV news was agog over the preparations. An enormous cave in a mountain full of provisions and water and living quarters. And then we all waited for the countdown while the cult, several thousand strong, set about the important task of praying. When Thursday dawned with no returning Savior in the sky, the prophet claimed that the power of her prayers had assuaged God’s wrath and he was giving us another chance. Such as.

Personally, I have no interest in living after an apocalypse. I’m all for standing on the porch to greet the arriving Vandals like the senators of Rome. I have no interest in living in any kind of ‘post-apocalypse’ anything. In the event of shortages I can see myself conducting a certain amount of husbandry so long as it didn’t include any killing. We have the room for planting here and abundant water in the springs that flow down the mountain behind the house.

Given a full-dress melt-down I only hope I could rise to the level of Petronius Arbiter who, when ordered to commit suicide by Nero who lusted after his stuff, threw an enormous party for his friends. He took a slow-acting poison then went around pointing out all the beautiful objects he possessed that Nero coveted – crystal, porphyry, marble, etc – smashing them one by one as he died. At least, that’s my version of one of my favorite stories.

That’s for me. Not the long, slow agony of a world in which civilization has failed. We’d be burning witches within a week.

Maybe the nuclear flashes were really the souls of unfortunate temps who were crushed in the rush to get lousy $30 DVD player “door crasher” specials at Waldemort.

ManchuCandidate: Yeah, the pick was boring as hell. Agreed.

Incidentally, I almost put “Time Person of the Year — 2006 (tie)” on my resume. Then I thought better of it.

@chicago bureau:
I was afraid that Time would try to create news and be unpredictable and pick the Talibunny as the person of the year. Though it would have been hard to ignore Unicorn under any circumstances.

@rptrcub:
That’s sweet of you to say, but I’m quite happy as a prolific commenter-slash-news source.

@Benedick: The problem with any post-apocalyptic scenario is that Mel Gibson no longer looks the way he did in Mad Max. Cuz’ DAMN.

@homofascist: Even when he was hot he was an asshole.

@rptrcub:
Meanwhile, in your neck of the woods, Muslim woman jailed for 10 days for refusing to remove her hijab when going with her nephew to traffic court.

@SanFranLefty: Hall said Valentine, an insurance underwriter, told the bailiff that she had been in courtrooms before with the scarf on and that removing it would be a religious violation. When she turned to leave and uttered an expletive, Hall said a bailiff handcuffed her and took her before the judge.

What, no shoe? That should be the universal eff-u now.

@SanFranLefty: It doesn’t surprise me one bit. I almost had a stroke this morning about it reading it in the AJC.

Also, could be the end of the world for Bill Richardson what with the “pay to play” grand jury and everthing. One of the witnesses appears to be his campaign manager Amanda Cooper, daughter of Sen-elect Tom Udall and a one-time political friend of RML. She is featured prominently in the Udall family Christmas card we got last week.

TJ: Drunkenfreude alert: George Tenet’s Drunken Outburst
From Atlantic via Daily Beast:
Here’s one Bush administration anecdote not uncovered by Bob Woodward. Back when he was CIA director, George Tenet had too much scotch to drink while hanging out in Prince Bandar’s pool in Riyadh, Saudi Arabia. “He drained half the bottle in a few minutes,” Patrick Tyler writes in A World of Trouble. “They’re setting me up. The bastards are setting me up. I am not going to take the hit,” Tenet reportedly said, referring to the blame game over Iraq’s WMD. There’s more, courtesy of an excerpt by The Atlantic’s Jeffrey Goldberg: “According to one witness, he mocked the neoconservatives in the Bush administration and their alignment with the right wing of Israel’s political establishment, referring to them with exasperation as, ‘the Jews.'” Tenet denied the remarks.

@Mistress Cynica: Beyond just being wrong, could they possibly pick other groups to pick on, besides the Jews, et. al.? Like, I dunno, German people? Azerbajanis? Burkina Fasoans? Maltans? Antarctic penguins? This is getting boring.