I Only Have Lies for You 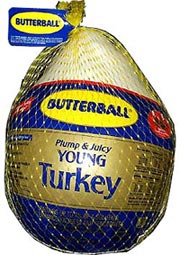 Did Sarah Palin see the turkey holocaust or didn’t she? Her sock puppet tells Entertainment Tonight she didn’t. (Yes, ET is now covering the Talibunny beat.) The guy holding the camera says she did:

Scott Jensen is the one who filmed the scene. He’s local station KTUU’s award winning chief photographer. He told CC from KUDO radio yesterday that Sarah Palin, who was standing next to her personal assistant throughout the entire interview, chose the spot on which she stood for the “turkey slaughter interview” that quickly went viral on the internet, and received wide coverage in the news media. The turkey slaughter was already underway when the governor chose the spot. The photographer pointed out what was going on and asked her if she wanted to move. She said, “No worries.”

Remember, it’s not the crime, it’s the cover-up. Follow the gobbler.

Turkey Gate – The Fiasco That Wouldn’t Die. [Mudflats, via Sully]

Apropos of nothing, a guy is standing on the corner outside my office in the middle of the Financial District during evening rush hour playing his bagpipes full blast.

@SanFranLefty: Is he wearing a kilt? And what’s under that kilt?

@SanFranLefty: Scotland the Brave, no doubt.

After watching the Palin video I think I’ll do a ham this year. Or maybe a Caesar salad.

@SanFranLefty: There’s a guy who hangs out near my office who plays pro-quality jazz guitar for whatever people put in his plastic cup. He looks and talks like a crazy homeless guy, but man, can he play. I need to find out his story.

@blogenfreude: That was actually a humane killing operation — much better than what the poor little piggies experience at the feed yard and the slaughterhouse. I bought a turkey from a farmer that I know was killed that way.
Enjoy your salad. Or maybe a nice vegetarian pasta.

@Mistress Cynica: I had a salad with pepperoncinis and store-brand pasgetti with canned mushrooms and canned sauce from the dented can aisle. Yay, recession!

@JNOV: Honey, having seen some of the types around the financial district, I’d be wary of looking up there.

@Mistress Cynica: Well it’s not going to be a duck stuffed w/ foie gras, I can tell you that much.

@Dodgerblue: That Dramarama song, “Work for Food,” thats his story.

I spent a 9 month hiatus from law (I have tried more than once to quit it) selling yachts. Boats. Depends on the price. I worked for a sales manager who was a real, lifelong, total salesman.

The job didn’t work for me. I am not a salesman, though I was succesful at it. Its kinda nice, you work in a Marina, you are working with people who, every one of them, is looking to make a dream come true, boat people love boats. It was mostly working with Tim that made me flee back to grad school, that and the fact my political buddy got me a fellowship.

Tim was one of those diarhea of the mouth type salesmen, he had to fill every moment with his constant patter. Like Palin. He would have someone sitting their trying to say “yes, I’ll take it, where do I sign, and he would keep talking and talking, they would try to interrupt and tell him its a deal, he would keep up his barrage of crap, he so loved to hear himself talk, and he thought he saved the day every time, that if not for his brilliant bullshit the sale would have been lost, when in fact he nearly drove them away.

But I am now wondering if he and Palin don’t have something else in common. He had a pathological need to lie. He would lie when the truth would do as well, or better, he would lie when there was no need whatsoever, he would lie for the pure pleasure of lying. He didn’t get any feeling of accomplishment out of a sale unless he had told at least 5 big lies. And again, most of them totally irrelevant lies, lies the customer didn’t even care about, completely unnecessary lies, except he had no satisfaction in his day unless he had gotten someone to believe a lie.

He would tell a meaningless, unnecessary lie, and then forget he had said it and contradict himself 5 minutes later, and then he came into his glory, because then he would unleash a thick smokescreen of lies to explain his first lie, a five minute soliloquoy of nonsense, trendy business speak (bulletproof, at the end of the day, bar none, I forget all the macho stockbroker speak shit he would spout), until finally everyone was just tired of trying to make sense of it all and gave up.

Whats really amazing is that anyone would believe any of his lies. He had the most ferocious, glaring “tell” I have ever seen. It was so so so obvious, at least to me. Every time someone would ask a question and he was going to spring a big stupid whopper on them, his eyes would roll back in his head and show all white, just like a shark when its about to bite. No exageration at all here, like a shark going in for the kill.

I always wished I could play poker with him.

@Promnight: I never sold boats, but I used to race J Boats. Damn I miss it.

@blogenfreude: Damn, thats serious sailing. I love the water, I love it.

@Promnight: Meanwhile, my head asploded tonight trying to review case law in re Jennings v. Elections Canvassing Commission in ’06 (doing a group Information Systems paper on electronic voting and ways to fix the system, er, not have as many elections stolen). The asplodey part was more trying to figure out how to properly cite it in the paper when I have no access whatsoever to the circuit-court level case reporters (the appelates, I’m cool with as Lexis will let you know, but all I had was the cert. denial) and just the PDF from the circuit court Web site.

@rptrcub: It is very difficult with things at the circuit court level. There aren’t a lot of official reporters at that level (I can’t think of any under at least the minimum appellate level, but there might be some in larger jurisdictions).

@JNOV: Men wearing kilts are a dime a dozen in this city. My favorite clerk at Cliff’s Hardware in the Castro wears a kilt and has way better legs than this dude did.

@Dodgerblue: You totally should get his story. Hell, he probably played with Hendrix. There’s an older black guy who plays sax on Market Street either at the California Street cable car turn around or by the Montgomery BART station who is amazing. He positions himself in such a spot that he gets perfect reverb off of the skyscrapers. The bagpipe dude was most definitely NOT getting perfect reverb off of the skyscrapers.

@rptrcub: Honey, RML beat me to the punch. You are hanging out with a bunch of people with access to Westlaw. My only question is whether you should do the cite Blue Book style or social studies style. (Yes I will outgeek you).

@SanFranLefty: I had half a notion to make a screengrab of Palin, the turkey feet, and Keith’s inset head, and declare the new zeitgeist.

@SanFranLefty: I wore a kilt for a TV years ago. Yes, the BBC makes tripe, too! We shot a week of location in Durham (border of Scotland and England) in Jan and it was cold as hell. We had to be taught how to march wearing said kilt and there was a very funny day spent with big burly DI showing us how to swish about waving our hips to make the kilt swing in time. If you don’t get the ass action right the squads kilts swing every which way which of course cannot be allowed. I don’t know what other men wear under theirs but I wore everything I could that wouldn’t show up as pantie lines.

@redmanlaw: Thank you. That works.

@SanFranLefty: APA relies on Bluebook for legal stuff rather than its own particular flavor of non-capitalization of things. And I’m glad I have you guys, because the university I’m attending has no law school; and the university at which I toil won’t let you look in WestLaw unless you are a student/faculty/staff member of said law college.

@JNOV: It has come to my attention that the “Black Watch” (Royal Highland Regiment) have a cutsom regarding what’s worn under the kilt.

It goes something like this. If there is a female monarch on the throne, then undergarments must be worn under the kilt.

@rptrcub: I have never known a judge who gave a rats ass.

@CheapBoy: So if the monarch’s your mum, does that mean Charles doesn’t go commando at Balmoral?

@nojo: Let’s hope not. *shudder* However, if Queen Lizzy somehow survives Charles and the throne passes directly to Prince William, I would say a mass depantsing by both genders would be entirely appropriate!

@nojo: One would assume so, and being she’s the Queen and probably had nannies to care for him, she can’t use the “I’m your mother and I’ve seen it all before.” line.

This line was trotted out often in my childhood due the number of groinal injuries I received at school.

@flippin eck: Now there’s a thought. Do they let women in the Black Watch? And what are the rules about monarchs and undies for women?

I don’t even think Wiki would know.

@CheapBoy: How does that come to one’s attention? We’re you planning on joining or did you sneak a peek?

I was watching Conan O’Brien several years ago, and he had this carazy-looking red headed violinist on — he was very good and very energetic, and he was wearing a kilt. At the end of his performance, he performed a high kick and he was not wearing knickers. You really couldn’t see anything but flesh tones, but still.

I always imagine that men in kilts have hairy asses.

@JNOV: Way back, many ago, a work colleague’s husband was a member of the Black Watch, and that is what he told about what is worn under a scotsman’s kilt.