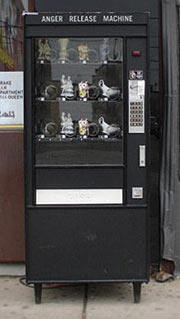 We think we’re supposed to be outraged:

They’ve come in the form of a burning Book of Mormon, shattered glass doors, mysterious white powder, graffiti and even a flaming plastic plant. A recent rash of crimes has swept churches along the Wasatch Front and peppered areas of California since Proposition 8, backed by the LDS Church, banned gay marriage there.

Bearing in mind that no evidence yet ties these events to opponents of Prop 8, the fact is, if the roles were reversed, we’d be all over it. Especially in those cases where symbolism crosses over into violence and intimidation. Hey, we thought the WTO kiddies in Seattle were idiots.

But honestly: We don’t have it in us to condemn. We don’t condone it, we think it unwise — but we can’t find our anger.

Where did it go?

Perhaps it got lost in all the chatter about Prop 8 as a “social issue.” It is not. Prop 8 was about denying human rights to citizens of California. It was about breaking up families. It was not a complicated issue about which reasonable people can disagree. It was legalized bigotry.

And that’s where we find ourselves disagreeing with Andrew Sullivan, who calls for a “political” solution instead of a legal one. We accept that an overwhelming vote against Prop 8 would have made a stronger statement than a state supreme court decision. But we find it abominable that one group of citizens should ask the rest for permission to marry. If rights are subject to plebiscite, they aren’t rights.

So we’ll leave it to others to be outraged by citizens expressing their resentment at their treatment by the Magic Underoo Cult. Meanwhile, we’ll enjoy our fantasy that maybe, just maybe, the Mormon church will someday be denied the privilege to indulge itself in tax-exempt bigotry.

nojo
7:00 am • Tuesday • November 25, 2008
comment »
Choose Your Delusion
I Only Have Lies for You Ann Coulter’s Jaw Wired Shut
12 Comments
ManchuCandidate

Did LDS think no one would be upset?

I guess in their “world” Space Jeebus has outlawed Newton’s Third Law of Motion aka for every action there is an opposite and equal reaction.

Look, I wholeheartedly condemn acts of violence and vandalism.

But these people should not be surprised when people are fucking mad at them.

Many of them honestly don’t know why, for the life of them, gay people are hating them all of a sudden.

As someone more eloquent than me put:

Fuck you. Yes, I’m talking to you. I’m done being polite about this, about pleading my case with civility and discourse.

Fuck your arguments about children, education, or “activist judges”, because it’s about none of those things, and you know it. You hide your bigotry behind lies and political rhetoric.

Fuck your argument that the only good family unit contains a mother and a father. I was raised by a single, awesome dad, and I turned out pretty fucking great. Fuck you for marginalizing my childhood.

Fuck your arguments about the sanctity of marriage, my partner and I have been together fourteen years, what makes your marriage more worthy of state recognition? Spare me the lecture. Or, make divorce and quickie weddings illegal, too.

Fuck your arguments about the history of marriage, learn its *real* history, which is hardly confined to the last few centuries of Christian belief. If the church didn’t want this day to come, they should not have let the government take over marriage. But since they did, and since government should treat everyone equally, we are here now. We’re not the concept of marriage as it stood three hundred years ago, we are here, right now. Act like it.

Fuck your argument that it’s about freedom of religion, which only proves that it’s a clear violation of the separation of church and state. How would you like it if I voted on your religious rights, too?

Fuck your arguments about the “slippery slope” it would create, in either marriage or democracy. Give society some fucking credit for having a modicum of common sense. A sudden wave of marrying dogs and widespread polygamy won’t happen, and you know it.

Fuck you when you say that civil unions should be enough, because separate but equal isn’t equal, and you know it.

Fuck your excuses about the will of the people, because sometimes all that amounts to is mob rule, especially when that mob is created through fear and lies, religious dogma, and massive out-of-state funding.

Fuck you for saying “oh, please understand that *my* personal decision isn’t driven by religious beliefs or moral propriety,” because underneath it all, it most certainly is… and if you’re dancing around that issue to justify your vote some other way, you’re in denial.

Fuck you for saying “some of my friends are gay” and still voting yes, because it doesn’t hide your bigotry. Your actions are your words.

Fuck you for making me a second-class citizen.

Thankfully we have a President now who acknowledged my existence as a Gay American in the first few minutes of his acceptance speech. Maybe, in time, his efforts at unifying this country will be successful for all of us, gay and straight. I don’t always agree with Andrew Sullivan, but he had a great post tonight that said “We must never let popular votes affect our own internal sense of our worth, our equality, our dignity as human beings. Our marriages are real; all that is at issue is whether a majority will recognize them in law. The next generation already does.”

And only the courts will decide this stuff. The populace has NEVER, ever been the guarantor of civil rights. Those who call for a gentle winning over of hearts and minds can be applauded for their efforts, but the general fucktards in this nation will never accede to accepting equality until forced to do so.

Where did it go? After the last eight years, I could care less what happens to the members of the administration and their enablers, including the breeders in Utah. In an ideal world we’d get even for the lives they took and the things they stole. In the real world, I do not feel even a little bit guilty for enjoying whatever misery might befall them. Fuck them all.

Forgot the linky to the diatribe:

Hey, threadjack of schadenfruede, Page 6 of the Post reports than Ann Coulter has broken her jaw and it had to be wired shut. What a mystery, how could Coulter have broken her jaw?

NY – found it – never mind. Please let it be true.

@rptrcub: Make sure to bring some headless turkeys.

@rptrcub: And right on cue, I get a Team Sarah email recruiting the laydeez for phone banks on behalf of Shitzby: “If we lose another seat in the Senate– it will become vastly more difficult for Team Sarah to STOP the left’s radical agenda.”

Not sure it’s sufficiently over-the-top to post, certainly not while we’re all heckling Coulter.