Till Vote Do Us Part 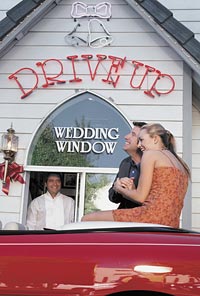 The California Supreme Court may take up Prop 8 for review today, and in so doing the justices face recall if they thwart the will of the Mormon church.

That’s how democracy works, of course. If you don’t hate with us, you’re against us.

But we’ll save that fun for later. Because buried near the end of the L.A. Times story reviewing the constitutional issues we find this nugget:

Proposition 8’s [Andrew] Pugno said voters could indeed resurrect a ban on mixed-race marriages if the issue had been decided purely on state constitutional grounds.

The reference here is to a 1948 decision that struck down a ban on interracial marriage. Pugno — general counsel for “ProtectMarriage.com” — says California voters could easily reinstate that ban, if only the state court hadn’t reached for federal justifications.

In other words: All California marriages are subject to the whim of the electorate, unless the Feds butt in.

Nicole Brown Simpson would still be alive, were it not for that pesky Constitution.

I hereby make a motion to create a new proposition to ban interracial marriages; marriages between people of different heights; people who live in different ZIP Codes; people who were not born in the United States; people who have different religions, and etc.

This thing has shaken me to my core unlike the raft of antigay marriage amendments passed in 2004, including in Georgia, which even bans the recognition of civil unions. So not even separate but equal for us.

This country needs to put up or shut up and show itself for what it is, Black Eagle or no. If it decides to be backwards, fine. I’m getting my grad degree on the state dime and giving Georgia the finger, along with the rest of fucktardia.

I believe marriage should only be between a (white, Christian, blonde, blue-eyed and fertile) man and woman.

@homofascist: That’s actually a nice segue to my TJ, the column that will get Kathleen Parker burned at the stake and fired from NR:

As Republicans sort out the reasons for their defeat, they likely will overlook or dismiss the gorilla in the pulpit.
Three little letters, great big problem: G-O-D.
I’m bathing in holy water as I type.
To be more specific, the evangelical, right-wing, oogedy-boogedy branch of the GOP is what ails the erstwhile conservative party and will continue to afflict and marginalize its constituents if reckoning doesn’t soon cometh.
Simply put: Armband religion is killing the Republican Party. And, the truth — as long as we’re setting ourselves free — is that if one were to eavesdrop on private conversations among the party intelligentsia, one would hear precisely that.
***
the GOP has surrendered its high ground to its lowest brows. In the process, the party has alienated its non-base constituents, including other people of faith (those who prefer a more private approach to worship), as well as secularists and conservative-leaning Democrats who otherwise might be tempted to cross the aisle.

Read it all here.

@Mistress Cynica:
I’ve rarely if ever agreed with her, but she’s hit all the right(heh) points.

@Mistress Cynica: I love it when they suddenly realize that the snake-handlers destroyed their vile little party. Fuck them all. Circular firing squads make me smile.

/tj/: Obama will have to fill judicial seats on the conservative 11th Circuit Court of Appeals down here in ATL.

Holy shit, Parker has gone SANE! Apparently, she is a secular racist, she doesn’t agree with the christian litmus test, just the purity of the bloodlines thing, you know, the real american heritage stuff she wrote about last summer.

@ManchuCandidate: It gets better. Our local gay haters are now threatening to recall any Cal Supreme Ct justice who votes to overturn Prop 8. Rule of law, my big Jewish ass.

@Mistress Cynica: this is exactly why Sarah Palin is good for us. She will destroy the Repug Party.

@homofascist: In addition, there needs to be a ballot initiative to revive the requirement of blood tests to get a marriage license – but the test will be to prove that you’re fertile. If you’re not fertile, you don’t get a licenses. And on the one year anniversary of your marriage, if you’re not pregnant or parenting a baby, then the marriage license is revoked.

Because the Mormoni said the purpose of a marriage is to breed. So if you can’t/don’t/won’t breed, then the heterosexuals can’t marry.

@SanFranLefty: I’m all over that. Marriage has obviously been perverted by atheists and those selfish idiots who have decided to subvert God’s will by going childless.

Me too. Henceforth all christofacists shall be known as the oogity-boogities, or simply the boogities, at least where I am concerned.

@Dodgerblue:
Yup, so much for the nice pretty face as the ugly is showing up.

It’s Marvin Belli’s character from the Star Trek ep “And the Children Shall Lead” all over again.

Manchu can confirm this, but back in the day, the Reform Party in Canada (read: American wingnuts with maple syrup and poutine — albeit poutine with an Anglicized name because the Reform Party didn’t do the whole French thing) was led by a guy named Stockwell Day, who wanted to put in a law saying that a national referendum on any subject could be held if 3% of people signed a petition. Designed for the anti-abortion, anti-gay, anti-anything-fun crowd that ran the Reform Party.

And thus, Rick Mercer — a modern-day Canadian genius, in my opinion — came up with a plan. A petition drive to force a referendum putting into law that Stockwell Day must change his first name to Doris. This was the death knell for Stockwell Day’s little plan.

And so: a modest proposal. That suggestion in the L.A. Times about interracial marriage being subject to the whims of the Californian people? Wind it up, Charlie. Put it on the ballot in protest.

@chicago bureau:
Yes it did. There were 6 million signatures on the petition at last count.

It accelerated the downfall of the male Sarah Palin who is now our Brownie (head of Public Safety (disasters)). A friend of mine works for him.

@chicago bureau: Precisely. He’s arguing that marriage is not a fundamental right, but a civil law with the legal status of noise ordinances. I find that fascinating.

nojo: But, of course, the gays are noisy. We can regulate the shit out of that.

“Males speaking in a lisp subject to a $250 fine, one month in county jail or both. Fines trebled for males (a) calling other males ‘girl,’ ‘girlfriend,’ etc. or (b) snapping fingers while lisping.”

Void for vagueness? No compelling state interest? BAH! We make the law! Suck on that, heathens!