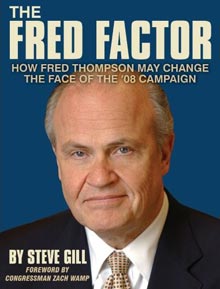 Oh, yeah. And because GOP rules would require a female co-chairman, you know Matt’s choice for runningmate ain’t Olympia Snowe.

“With the party in the hands of a high-wattage Thompson-Palin tag team, I’m pretty sure that the two could seize the offensive and leave the new president in the dust,” Matt writes. “After four years of Obama’s socialist policies, something tells me that the American people are going to be ready for another tea party.”

Matt, we’ve got yer back on this one. Because while you’re waiting for your tea party, a Thompson-Palin tag team would guarantee the rest of us one helluva rave.

High wattage? If he means “stage” presense, maybe. If he means brainpower? Between those two dumbasses there isn’t enough heat to ignite a tank of gasoline.

As said before on Brand W, Fred Thompson shall, and forever more, be known as Dipshit McGoo.

I have been told that she has a lot of executive experience.

As I’ve said before – I truly miss the days when he was wandering around the country trying to figure out why he wanted to be president. Good times.

I think we can all agree that having Thompson/Palin to kick around for the next four years is all the comedic highlight necessary to make Black Eagle look eight times more presidential than he already does.

@blogenfreude: Because of the pension benefits. And the health care.

@homofascist: And she knows how to cocktease an old man. That’s important.

TJ: This should be interesting. From the Daily Beast:

With a standoff breaking out between Mormons and gays, this will probably add some fuel to the fire: Trey Parker and Matt Stone, the creators of South Park, are working on a Broadway musical entitled Mormon Musical. On board is a creator of Avenue Q and actor Cheyenne Jackson, who starred in the hit musical Xanadu. “It’s hilarious—very acerbic and biting. It offends everybody but does what ‘South Park’ does best, which is by the end it comes around and has something great to say,” Cheyenne told Pop Wrap.

@Mistress Cynica: I just lurved that South Park episode where they went over the history of Mormonism:

@ManchuCandidate: Oh yes they do. Not if you work for scale, of course, but a ‘known’ voice can make a great deal of money here in the land of Freedumb. EG. The man who said “Pizza, Pizza!” in the eponymous commercials (and that’s all he did: not a pro, just a guy with a voice) made upwards of $2m a year.

BTW, where can I get a job like that?

This would be AWESOME if only for the Bunny/Jeri power struggles that would inevitably ensue.

@Jamie Sommers: Jeri could beat her with her implants.

@Benedick: How much does “Lets get ready to rummmmble” guy make?

@Prommie: I have no idea. I only know that other factoid because the casting director for those commercials told me. I think he was trying to impress me. I have no idea why. And he didn’t. Because he’s a jerk.

We had snow this am. Must go plant daffodils.

@nabisco: You know, as nice as it would be to watch Michelle Obama and Elizabeth Kucinich make out, Fred could probably get some attention again if he trotted out Jeri and Talibunny and had them make out on TV before his appearances.

@FlyingChainSaw: You should add that to the RNC’s idea website. I’ll bet it would top the TruckNutz suggestion real quick!