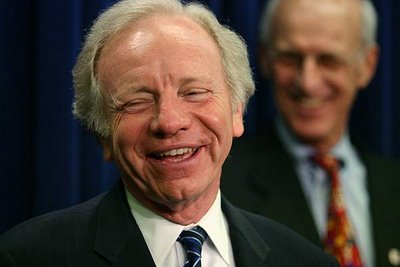 Criminal fuck. I have a chair I’d like to duct tape him to.

Fuck on a popsicle stick.

Mother of God. Joe all but said that Barack Obama would surrender to the terrorists, and he stays.

“This was not a time for retribution,” Reid said, quoting an unnamed Senator. We’re “moving forward,” Reid added…. Asked about liberal “anger” towards Lieberman, Reid said: “I pretty well understand anger. I would defy anyone to be more angry than I was.” But he added: “If you will look at the problems that we face as a nation, is this a time we walk out of here saying boy did we get even?” “I feel good about what we did today,” Reid said. “We’re moving forward.”

In the business world, “moving forward” means “we can do it and you can’t stop us so piss off.”

Get Pat Leahy and Russ Feingold up in the bullpen. We may need a pitching change before the end of the inning.

All you dirty liberals out there should e-mail the DSCC.

Inform them what you will be doing with your money, as opposed to giving it to them. Make it sound like you will have a lot of fun with their donations.

How about kicking the shit out of Harry “NoNads” Reid then?

I can stomach the Hilsbot as Sec State. She isn’t totally awful when she’s not taking calls at 3am, but this?

Lieberman, many will recall, was responsible for holding hearings into the government’s response to Hurricane Katrina. But after winning his 2006 election with the help of the GOP, he decided it would be too “divisive” and refused to do so.
…

Not only is Joe Lieberman not doing that job, as Chairman of the Department of Homeland Security Committee he’s keeping anyone else from doing it. He happily allowed a seat on the Homeland Security Advisory Council to be doled out as political patronage to a corrupt Bush Pioneer. He has no interest in cleaning up the mess he helped to make.

A small upside: he’s off the Environment and Public Works committee.

Wait until 2012. CT gave Chris Shays the boot, and Short Ride Joe will be next.

Odd: TPM reports that one of the Senators (and, apparently, Senators-to-be) who spoke up was the newly-elected Tom Udall, from Colorado. Also: Kerry, Durbin.

If anything, this demonstrates that Barry’s got the Senate, and particularly new Senators, right in his hand. He said that Joe is forgiven. And thus Joe is forgiven, because of the words of Hopey (may peace be upon him).

There is promise, and danger, in the exercise of top-down discipline coming from the Obamaplex. The House is poised to become a legislation factory. (If, of course, Nancy finds herself some intestinal fortitude. Big if.) If he has the ability to bend the Senate to his will, even on the question of whether a political traitor can remain in caucus, there may be greater power in this man than one would have thought. But if he doesn’t use that power for good, but rather to save Joe and to perform other lukewarm stuff? Well, I just don’t know, then.

@chicago bureau: Perhaps this is a grand plan to keep Joe in line during Republican filibuster attempts that will inevitably happen if Franken (MN) and Martin (GA) don’t help the Dems get to 60.

Indeed, we could be looking at a legislation factory the likes we haven’t seen since LBJ.

@chicago bureau: Barry’s picking his battles. I wish he had picked this one, but he’s keeping his powder dry to run that legislative factory next year.

This is not politics as usual. I think he actually wants to get shit done.

On the good news front…

@nojo: And he knows there is a substantial faction in the Congress whose agenda has one bullet point: make sure that he can’t move anything past the committees and that his presidency dissolves into a thrashing horror.

@chicago bureau: Which Sen. Udall was that? Tom (son of Stewart) is from New Mexico. His cousin Mark is from Colorado.

The one from Colorado. Whoever that is. (But the New Mexican probably did the same thing, because they’re like related and stuff.)

Must you bring images like that to my head?

@Tommmcatt Yet Again: Of course not. But who you make yourself a bitch boy to is open to scorn in my opinion…

So where does Joe the Schmoe stand on this National Security threat? The people demand answers — BEFORE IT’S TOO LATE!!!

Once at the “linked to” site, click the “these guys” link. Some people is serious about their zombies.

Granted. However, that does lead me back to point one.

god, I hate this little worm.

I think refusing to stomp Joe is Unicorn’s Sister Souljah moment. Its subtle, but I hear signs of it from people. He’s doing a Sister Souljah move on PARTISANSHIP. We might hate it, but I think it speaks to independants and republicans who voted for him. It reassures the middles that its not gonna be more of the same, just with the democrats in charge. And now, having made this high-minded gesture, he can proceed to destroy the policies of the republicans, correctly saying that its not personal, its a matter of sound policy. So far above petty personal vendettas. I think someday we might look back and regard it as brilliant. Its 50-50, anyway.

@Promnight: Anyone who will stab you in the chest, will stab you in the back. This isn’t about partisanship – this is about making the Congress clear enough of freaks like Joe – or far enough away from the handles of power – that you can get something done. He shares the same agenda as the remaining GOP suicide bombers: train wreck any attempt at rolling back the last 8 years of fascist lunacy and destroy Obama’s presidency. It’s like letting the creature from Alien keep the committee chair.

@FlyingChainSaw: We shall see, my friend. In my gut, I want to string them all up, the republican mob that damn near destroyed our democracy and brought us to the brink of fascism. But that visceral reaction is the reaction that produces socieities like Rwanda with its Hutus and Tutsis and the balkan states, still killing each other over a battle that took place 900 years ago. What you are seeking, treating the regime now out of power as criminal, would destroy our system. It would. That kind of cleansing only comes after decisive military conquests, or after many years have slowly created consensus, as opposed to momentary political superiority measured by 7 million votes out of 300 million people.

I am sorry, but our form of government has for the most part, and better than most, avoided constant civil war and generations long enmity, precisely because we don’t do that. The greatest evil of the republicans is their demonization of us, rather than regarding us as fellow americans with different views, regarding us as criminal traitors. Tit for Tat, always does just result in escalation.

If there is any genius in what Jesus taught, its forgiveness. Yes, they are more violent and nasty and ruthless than we are, but at least in the last couple of hundred years, the only succesful real changes and triumphs over injustice have been accomplished by people like Ghandi and King and Tutu.

@Promnight: Prom, the goons murdered Iraq and prompted the death of hundreds of thousands, dislocation of hundreds of thousands and the maiming and death of tens of thousands of Americans – for the entertainment and profit of BushCo. I’d expect the party in power to hold the party out of power in contempt and conspire to destroy it. That’s politics. I wouldn’t expect it to murder a country for fun and profit under false pretext. That’s not politics. It’s a crime, a monstrous crime against humanity and a capital crime at that. Ignoring the crimes renders the civil institution of justice meaningless. I understand what you are saying. Viscerally, I’d like to find every Congressfreak that voted for the war and every editorial writer that advocated the prosecution of the war and dismember them. But as much as it would please god, I won’t get my wish. Still, the characters who orchestrated one of the greatest crimes in American history need to see justice as much as crew who swung from short nooses in Nuremberg.

And Clinton started it and supported it, how many airstrikes did he order in the last months of his administration, who adopted “regime change” as the official policy of our government? Once you start, where do you draw the line? Hey, I believe Cheney is a complete moral monster, with more power, in a different country, he could have been a Stalin, and Hitler, he’s evil incarnate. But you cannot do this, without producing a reaction, and a reaction to the reaction, and so on forever. Hell, Cheney’s evil was in large part his revenge for the impeachment of Nixon (threat of impeachment that forced him out of office). Make martyrs of Bush and Cheney too soon, and you make heroes of them for the still too large part of our country that is too stupid, as of yet, to judge rationally. Just wait, justice will be done.

The vital institution of justice has never applied to the State itself. Never in history. Not in the sense of criminal indictment and criminal process. Its what the republicans did to Clinton, tried to make a political matter a matter of courtroom justice, it was wrong. This is a political crime, not a criminal matter for the courts. Hey, I am not apologizing for their acts, I am saying stable civil society and democracy will not be sustainable if we turn to a system where the winners then prosecute the losers after every election, and that is what would result, no matter that our cause would truly be just if we did hold a Nuremburg inquest and punish them all. It would just result in a repiublican inquest into traitorous socialist crimes committed by democrats, after the republicans next win an election.

You just can’t criminalize the politics you disagree with. We’d have hanged a bunch of people for the Spanish American War and the atrocities in the Phillipines, and who would have swung for the Gulf of Tonkin fraud? There are a dozen other examples. Making a stable government work when people will always be in disagreement, I am sorry, its a purely pragmatic and practical endeavour, those who are committed completely to abstract notions of justice and honour, well, I am sure thats what Bin Laden thinks he is doing, just demanding justice.

There is no justice, ya know? There just isn’t. It costs too much. If there were justice in the worldl, every one of us who enjoys life high on the hog here in the US would have a lot to answer for, as we sit and discuss the various merits of the wines we drink and the fancy foods I myself console myself with so I don’t have to think about the vast amount of injustice in the world.