Your Tax Dollars At Work 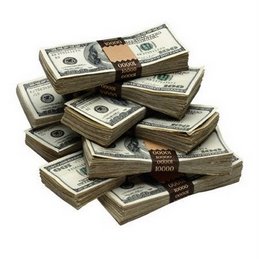 So your retirement account has been wiped out?  Your largest asset is now the half tank of gas left in your Honda?  Nice to know that AIG is spending your money on things that will make your life better:

Even as the company was pleading the federal government for another $40 billion dollars in loans, AIG sent top executives to a secret gathering at a luxury resort in Phoenix last week.

Reporters for abc15.com (KNXV) caught the AIG executives on hidden cameras poolside and leaving the spa at the Pointe Hilton Squaw Peak Resort, despite apparent efforts by the company to disguise its involvement.

“AIG made significant efforts to disguise the conference, making sure there were no AIG logos or signs anywhere on the property,” KNXV reported.

A company spokesperson, Nick Ashooh, confirmed AIG instructed the hotel to make sure there were no AIG signs or mention of the company by staff.

“We’re trying to avoid confrontation, keep our profile low,” said Ashooh. “Some of our employees have been harassed.”

Harassed?  We should rise up as one, and slay them.  We save their asses, and this is our thanks.  Call your “representatives” and bitch.

Steve in Manhattan
10:00 am • Tuesday • November 11, 2008
comment »
Choose Your Delusion
Bless You, Paul Broun Forward Into the Past
18 Comments
lynnlightfoot

It is time for President-elect Obama to unleash a come-to-Jeebus talk for these people because W sho’ ain’t gonna.

@lynnlightfoot: Thanks for the tip. He’s right, of course, but I suspect we’ll continue to socialize only corporate losses.

Goddammit, that’s it. Give it back , shitheads.

Meanwhile, the door to door solicitations for gas money have started in my neighborhood. Fortunately, we had a few bucks lying around to help our neighbor get some gas for the Suburban. Friday is a long time away sometimes.

Check this out.
http://www.politicker.com/i-can-see-mexico-from-my-house
Who in their right mind would compare Janet to the Talibunny like this?

AIG is asking for it. They are not well liked by their own industry as it is. Knew one guy who was in a very successful and stylish practice at AIG and he joined a regional firm again after 7 years. Could not take the culture of the place which basically says the customer is an indecisive twit that has to be cornered, beaten and told what to do. A number of big players in the industry would be very happy to see AIG out of their insurance sectors.

@redmanlaw: We still don’t know whether or not Friday will be Mr Cyn’s last day of work with his current employer. We have some money put by, but if he’s out of work for more than 30 days, it’s not going to be pretty.

@Mistress Cynica: Mrs RML has friends who took the newspaper’s buyout only to see the door slam shut on state and local government jobs. They are angry, scared, freaking out and wondering what to do now.

@redmanlaw: And judging from yesterday’s quarterly report, that fall-back barista job at Starbucks won’t be an option.

On a related douchebag note, LA Times and ProPublica reveal unsurprising bombshell that Goldman Sachs urged investors to bet against California state bonds that they helped our state government issue.

@rptrcub: Mrs RML does four jobs at the paper in order to make herself more valuable and hard to replace: magazine editor, bi-weekly columnist, gossip columnist and fill-in editorial writer. She got into the biz for idealistic reasons and ended up mainly doing fluff to prop up the bottom line.

@redmanlaw: I still remember the grizzled J-school prof addressing the freshman class before the school year began: Get out, he said. Now.

This was long before the Internet — the cloud on the horizon in those days was Gannett. But since my dad worked in the local paper’s circulation department all my life, I was already familiar with the business side.

All those inserts in the Sunday paper? They used to be high-margin display ads in the paper proper, those that weren’t weekly mailers that avoided the paper entirely. The cost of newsprint? Up, up, up. Long before Craigslist, the industry was dying a slow death.

But yes, the general rule for any pay-the-rent career: Make yourself useful. Especially if your utility is tied to the institution’s income.

@nojo: Wish someone had convinced me to drop out of law school.

“Don’t.” Megadeth guitarist Dave Mustaine’s advice to young people considering playing hard rock for a living, in “The Decline of Western Civ., Pt. 2: The Metal Years” (on the IFC yesterday).

Some of the best training I received — I’m not sure for what — was when I answered phones in circulation during college. Hell hath no fury like a subscriber whose newspaper is missing.